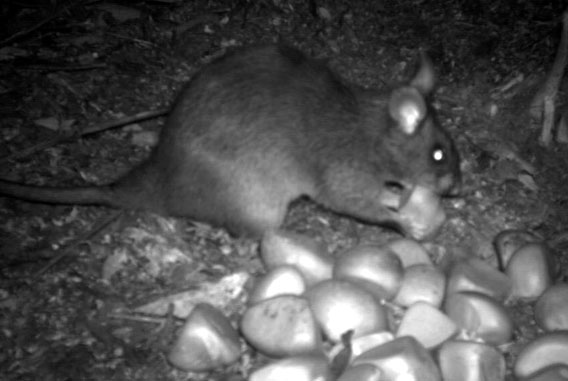 Rats are rarely thought of as heroes. In fact, in many parts of the world they are despised, while in others they serve largely as food. But, scientists are now discovering that many tropical forest rodents, including rats, serve as heroic seed dispersers, i.e. eating fruits and nuts, and carrying seeds far from the parent tree, giving a chance to a new sapling. While this has been documented with tropical rodents in South America like agoutis and acouchis, a new study in Biotropica documents the first successful seed dispersal by an African rodent: the Kivu giant pouched rat (Cricetomys kivuensis), one of four species of giant African rats.

For those in temperate countries familiar with squirrels, the fact that rodents play a big role in dispersing seeds is not surprise. However, it was long thought that tropical rodents behaved in such a way as to leave seeds no chance to sprout.

“Generally, because giant rats make burrows and store food in deep cavities, it is often assumed that seeds are doomed,” explains Dr. Pierre-Michel Forget, co-author of the study . “However we found that giant rats were also scatter-hoarding large seeds such as those of [the fruiting tree] Carapa grandiflora in Rwanda. Thus, just as other large tropical rodents face a season of fruit scarcity, giant rats not only store food in their burrows, but also cache and bury more seeds that they will later retrieve, forget or abandon, and if they escape other seed predators, they may germinate and establish seedlings.”

Using camera traps, Forget and PhD student Aisha Nyiramana with Butare University documented Kivu giant pouched rats feeding on the fruits of the Carapa grandiflora and scatter-hoarding a proportion of its seeds. Forget says that this means it’s highly likely other giant rats in Africa play a similar ecological role. Although, none of the rats are listed as threatened by the IUCN Red List, they are still imperiled by the same forces driving a general decline in African wildlife: habitat loss and bushmeat hunting.

“In the Afromontane forest, cattle ranching and agriculture are destroying the last natural forest habitat that occur at high altitudes,” Forget says, adding that in fragmented forests the giant rats may actually be hurting overall tree diversity, since they prey on some seeds and not others.

“Thus, when forest is disturbed, so are the giant rats,” Forget adds.

But it’s more than just forest loss and fragmentation that is threatening the continent’s giant rats. Bushmeat hunting has also become a problem and soon may worsen according to Forget.

“When people are hungry, they hunt giant rats. In 2007, while I visited Cameroon […] I took several pictures of dead giant rats being sold in front of restaurants. Thus, the pressure exists and is likely increasing as the bush meat crisis develops, and people will have less protein available in the forest. […] When people have exterminated the larger game species, as happened in Nyungwe National Park after the last elephant went extinct in 1999 due to poaching, then they focus on the smaller game species. After primates and hornbills, giant rats are next on the list.”

However these species are not seen as just food on the continent: an NGO known as APOPO has been teaching African giant rats to detect land mines in post-conflict countries. Trained to smell TNT, the rats are able to locate mines without setting them off (due to their relatively small size). The organization also works with giant rats to detect tuberculosis in human mucus. These are hero rats indeed, and they may not be the only rodents that deserve such a title. Forget says that a number of other rodents in Africa likely play a role in dispersing seeds, but much more research is needed to determine their efficacy.

“The question remains of how many of them behave as efficient dispersers, e.g. that they do not consume all their hoards as in time of food crisis, but save some of them that can be later used for seedling recruitment. It is often a very small fraction of the total seed crop produced by the plants, but such small percentage are crucial for their survival, and that of the rodents too in the end. If a rodents eats all his stored seeds, then he will starve in the lean season, and the plant won’t recruit. If the same phenomenon repeats over time due to a lack of resources, or that rodent goes extinct, then no doubt many tree species will also fail to reproduce and will disappear,” explains Forget, adding that, “As in Ice Age, one seed and one giant rat can make a big difference to save the forest.” 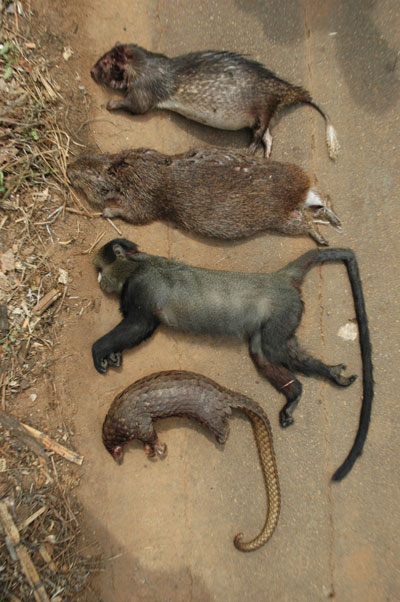 Bushmeat in Cameroon. The bushmeat trade targets rodents (top two), primates (second from the bottom), and pangolins (bottom) among many other species. Photo by: Pierre-Michel Forget.

(04/12/2011) A fruit in the flooded Amazon falls from a tree and plops in the water. Before it can even sink to the floor, a 60-pound monster fish with a voracious appetite gobbles it. Nearly a week later—and miles away—the fish expels its waste, including seeds from the fruit eaten long ago and far away. One fortunate seed floats to a particularly suitable spot and germinates. Many years later the new fruit tree is thriving, while the same monster-fish returns from time-to-time, waiting for another meal to drop from the sky. This process is known as seed-dispersal, and while researchers have studied the seed-dispersal capacity of such species as birds, bats, monkeys, and rodents, one type of animal is often overlooked: fish.