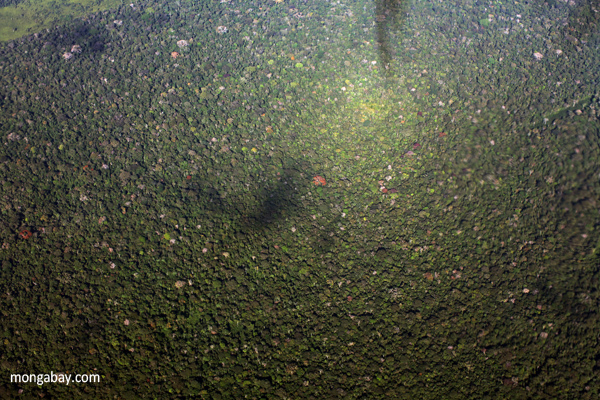 Amazon rainforest in Peru. Photo by Rhett A. Butler

The 2010 drought that affected much of the Amazon rainforest triggered the release of nearly 500 million tons of carbon (1.8 billion tons of carbon dioxide) into the atmosphere, or more than the total emissions from deforestation in the region over the period, estimates a new study published in the journal Environmental Research Letters.

Christopher Potter from NASA Ames Research Centre and colleagues combined a carbon cycle simulation model with NASA satellite data which reflects the ‘greenness’ or net primary production of forest to develop their estimate. The researchers only accounted for loss in CO2 uptake by vegetation caused by drought stress, including decomposition of soil and dead wood in regularly flooded forest areas left dry by the drought. Their estimate did not include emissions from fire associated with the drought.

Overall the researchers found emissions from the drought — the worst ever recorded in the Amazon — to be “roughly equivalent to the combined effects of anthropogenic deforestation and forest fires in undisturbed Amazonian forests.”

However Potter and colleagues said that some of the losses could be offset by increased plant growth with the resumption of normal conditions. Other studies showed such a recovery in the aftermath of the 2005 drought, which at the time had been the most severe on record.

Nevertheless other researchers fear that the apparent increase in severe droughts — believed to be a product of deforestation, fragmentation, and climate change — may portend a more dire scenario: collapse of the Amazon rainforest ecosystem.

Using simulation models that account for the impact of increased atmospheric carbon dioxide concentrations on temperature and precipitation in the region, scientists at the Hadley Center for Climate Prediction and Research in the UK have forecast significant “die-back” of the Amazon rain forest by mid-century and a virtual collapse of the ecosystem by 2100.

Meanwhile Dan Nepstad, a scientist at the Instituto de Pesquisa Ambiental da Amazônia (IPAM), has estimated that as much as 55 percent of Amazon forests could be “cleared, logged, damaged by drought, or burned” in the next 20 years should deforestation, forest fires, and climate trends continue apace. The damage will release 15-26 billion tons of carbon into the atmosphere, adding to a feedback cycle that will worsen both warming and forest degradation in the region.

(07/18/2011) Researchers have devised a model to anticipate drought and forest fires in the Amazon rainforest.

(04/17/2011) NASA has revealed a satellite image of the crippling effect of last year’s record-breaking drought on the Amazon ecosystem. For those of you counting, that’s two record droughts in the Amazon Basin in 5 years.

(08/12/2009) Old growth forests in the Amazon store nearly 10 billion tons of carbon in dead trees and branches, a total greater than global annual emissions from fossil fuel combustion, according to scientists who have conducted the first pan-Amazon analysis of “necromass.”