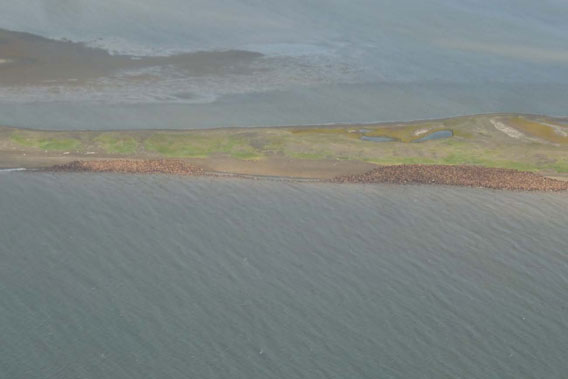 Recent, unprecedented walrus haul-outs and increased instances of long-distance swims by polar bears show the direct impacts on wildlife of dwindling Arctic sea ice from climate change. These threatened species also face the prospect of offshore drilling in the Arctic after the Obama Administration recently approved a number of plans to move forward on oil exploration.

At least 8,000 walruses hauled out on an Alaskan beach along the Chukchi Sea on August 17. Only a day before, the U.S. Geological Survey announced it would begin tagging walruses near Point Lay, Alaska to study how a lack of sea ice is affecting the species. Pacific walruses (Odobenus rosmarus divergens) normally rest on large ice sheets, and their presence on land reflects a growing scarcity of Arctic sea ice caused by global climate change.

“These dangerously large walrus haul-outs in the Chukchi Sea are a direct result of extreme Arctic sea ice melt caused by climate change. Unless carbon pollution is dramatically reduced, walruses, polar bears, and even people in the Arctic will face a much more perilous future than they do already,” explains Geoff York, an Arctic wildlife biologist with the World Wildlife Fund.

This year’s haul-out began three weeks earlier than in 2010, when 20,000 walruses clambered onto land near Point Lay. This month, radio-tagged walruses were spotted onshore as early as August 7 during once unprecedented haul-outs, which have become common in recent years.

As of August 11, the breadth of Arctic sea ice was the second lowest ever recorded. Meteorologist Jeff Masters, Director of Meteorology at The Weather Underground (which provides weather for Google and the Associated Press), forecasted an Arctic Dipole weather pattern similar to that which produced record low sea ice in 2007. Masters predicts sea ice coverage will hit a new minimum this August. According to NASA and the UK Met, surface air and sea temperatures in July were far above average in the Arctic.

Walruses on shore face crowded conditions that can lead to the death of calves during not-uncommon stampedes. In 2009, USGS scientists found 131 walrus carcasses near Icy Cape, Alaska. Nearly all were calves, and the USGS linked their deaths to a loss of ice over the Chukchi Sea.

Hauled-out walruses also are vulnerable to human predation. Before 2010, walruses near Point Lay were easy pickings for hunters. However, hunting has been curtailed after village elders in the Alaskan Arctic met with native Russians through an international exchange program sponsored by the World Wildlife Fund and the U.S. Fish and Wildlife Service. The Russians shared their practical experience with walrus and polar bear conservation, prompting Alaskan leaders to crack down on hunting and to request flight restrictions near haul-out areas to prevent frightening walruses into deadly stampedes.

Polar bears, a threatened species, also rely on disappearing sea ice.
The USGS and the World Wildlife Fund (WWF) published a
groundbreaking study in July that found polar bears are swimming longer distances to reach land or stable ice due to climate change—and such long-distance swims can be especially fatal for polar bear cubs. By comparing data from collared bears with satellite images of Arctic sea ice found that over six years twenty bears swam 50 long-distance treks (defined as 30 miles or more). Some swam up to 426 miles; others swam for nearly 13 days before finding refuge. Female bears obliged to swim long distances to find stable ice were 27 percent more likely to lose their cubs while swimming—a 45 percent mortality rate for polar bear cubs forced to swim long distance.

But it’s not just that loss of sea ice that worries scientists: walruses and polar bears in the Chukchi and Beaufort Sea are now under further threat.

On August 18, the Obama administration approved plans to open the Chukchi Sea to offshore drilling, but the Center for Biological Diversity (CBD) asserts there has not yet been an adequate Environmental Impact Statement (EIS). The Center sued for a supplemental EIS after an environmental review by the Bush administration in 2007 was deemed inadequate. However, the August 18 review dismissed claims that the effects of drilling on wildlife must be studied before Arctic oil exploration moves forward.

“It’s a painful irony that on the very day the Interior Department says no additional information is needed to understand the impacts of drilling on Arctic wildlife, distressed walruses in the Chukchi Sea were seen hauling themselves onto shore because there’s no sea ice where they need it,” said Rebecca Noblin, Alaska director of the CBD.

In early August, the Obama Administration opened another Arctic Sea, the Beaufort Sea, to offshore drilling. The administration granted Dutch Royal Shell preliminary approval, pending an oil spill response plan, to begin exploratory drilling in a sea home to walruses, polar bears, and many other Arctic marine species. Holly Harris, an attorney with environmental group Earthjustice, dubbed the decision ‘a disaster waiting to happen’. Oil spills in the Arctic could prove impossible to mitigate given icy conditions and a lack of infrastructure and resources. If a spill occurs soon before the Arctic winter, officials may have to leave the spill until the next summer, which likely would be disastrous for the ecosystem. Shell claims it could clean-up 95 percent of the spill, a much higher percent than was cleaned in the Gulf under much easier conditions. 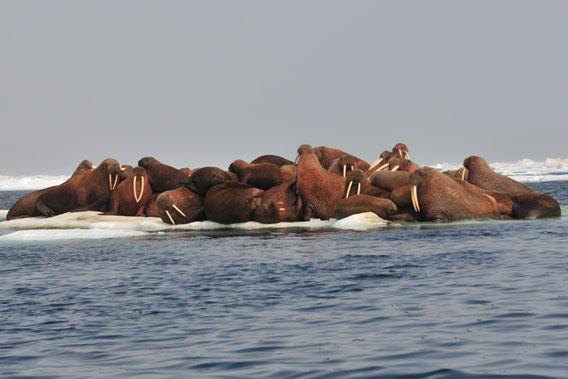 Walruses resting on an ice floe in the Chukchi sea. Researchers are attempting to radio-tag walrus in order to study their changing movements due to melting sea ice. Photo by: USGS.