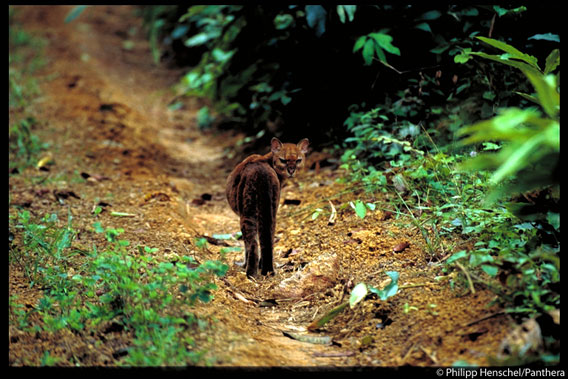 One of the first handheld photos of a living, wild African golden cat. Gabon, 2003. Photo by: Philipp Henschel/Panthera.

Africa is known as a continent of felines: leopards, cheetahs, servals, caracals, and of course the one who wears the crown, the lion. But, few people travel to Africa to see, or have probably ever heard of, the African golden cat. Native to the rainforests of central Africa (from Kenya to Cameroon) with a separate population in West Africa, the African golden cat (Caracal aurata) is considered the continent’s least-studied feline. However, a team of researchers is hoping to change this: using camera traps scientists have taken the first ever public video of the African golden cat.

University of Kwazulu Natal graduate student Laila Bahaa-el-din, who is heading up the work, captured the video in a logging concession in Gabon in association with the University of Oxford’s Wildlife Research Unit.

“I don’t think I can put (capturing the video) into words,” Bahaa-el-din told CNN. “I live and dream golden cats most days. To get back to camp and put the (footage) on the computer and have this cat basically posing for the camera, it’s incredible. I watched it five times in a row and pretty much didn’t sleep that night.”

The videos (visible below along with additional photos) shows what is believed to be the same young adult male African golden cat. In the first, he grooms himself during the day, and in the other chases a bat at night. Photos and videos in the area show that the cat is more active during the day than expected.

The cat is so cryptic that the first known photo of a wild individual in its habitat was only taken in 2002 by Philipp Henschel, Lion Program Survey Coordinator for Panthera, an NGO devoted to the conservation of wild cats. Panthera is also helping to fund Bahaa-el-din’s work.

Bahaa-el-din is working on studying cat presence in various areas, including logging concessions and areas of high hunting to see how the species is faring in the face of ongoing threats.

About the size of a bobcat, African golden cats are most closely related to servals and caracals. They are the only African cat wholly dependent on forest cover for survival. Listed as Near Threatened by the IUCN Red List, the species is imperiled by deforestation and hunting, largely for their skins. The IUCN estimates that the population has dropped 20 percent in the last 15 years and is still decreasing. The cat’s habitat often overlaps with forest leopards, which are known to kill them.

A playful African golden cat hunting a bat at night. 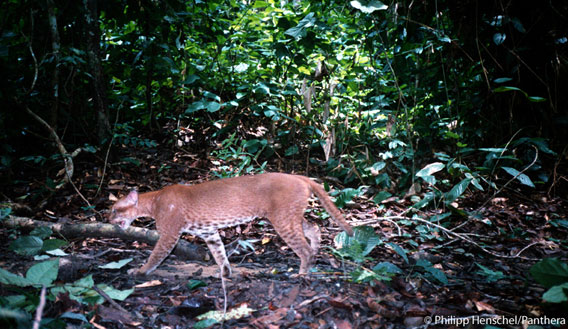 One of the first photos of a living, wild African golden cat – Gabon, April 2002. Photo by: Philipp Henschel/Panthera. 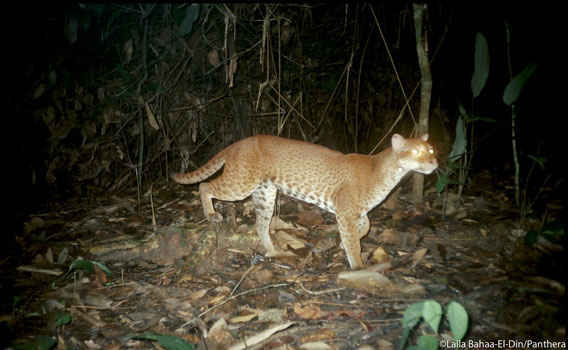 (08/14/2011) The Environmental Investigation Agency (EIA) has warned the US, the UK, and all tiger-range nations that China has re-opened the trade in wild cat skins—including tigers—ahead of a Convention on International Trade in Endangered Species (CITES) meeting this week in Geneva, Switzerland. According to the EIA, China has reinitiated a Skin Registration Scheme that allows the trade of big cat skins from legal sources, such as captive-bred cats and controversial tiger farms, however the NGOS argues the scheme lacks transparency, providing an easy cover for the sale of skins taken from big cats poached in the wild.