Humanity knows less than 15 percent of the world’s species Unidentified butterfly in Sumatra. Photo by: Rhett A. Butler.

Scientists have named, cataloged, and described less than 2 million species in the past two and a half centuries, yet, according to an new innovative analysis, we are no-where near even a basic understanding of the diversity of life on this small blue planet. The study in PLoS Biology, which is likely to be controversial, predicts that there are 8.7 million species in the world, though the number could be as low as 7.4 or as high as 10 million. The research implies that about 86 percent of the world’s species have still yet to be described.

The question of how many species exist has intrigued scientists for centuries and the answer, coupled with research by others into species’ distribution and abundance, is particularly important now because a host of human activities and influences are accelerating the rate of extinctions,” said lead author Camilo Mora of the University of Hawaii and Dalhousie University said in a press release.

Estimates for life on Earth have varied widely, jumping from 3 million in total to 100 million, but the authors of the paper argue theirs is the most certain estimate to date.

“We discovered that, using numbers from the higher taxonomic groups, we can predict the number of species. The approach accurately predicted the number of species in several well-studied groups such as mammals, fishes and birds, providing confidence in the method,” says co-author Dr. Sina Adl at Dalhousie University.

The team came up with the estimate by analyzes the 1.2 species listed in the Catalogue of Life and the World Register of Marine Species.

According to the paper, 91 percent of ocean species remain undiscovered, while 93 percent of fungi are unknown.

“We have only begun to uncover the tremendous variety of life around us,” says co-author Alastair Simpson, also with Dalhousie. “The richest environments for prospecting new species are thought to be coral reefs, seafloor mud and moist tropical soils. But smaller life forms are not well known anywhere. Some unknown species are living in our own backyards—literally.”

Less is even known about the threats to species in what scientists say is an age of mass extinction. The International Union for the Conservation of Nature, which evaluates the threat-level to species, has to date analyzed just over 59,000 species, or 0.6 percent of the world’s species according to the new estimate.

“Many species may vanish before we even know of their existence, of their unique niche and function in ecosystems, and of their potential contribution to improved human well-being,” Mora said, adding that given this, ” I believe speeding the inventory of Earth’s species merits high scientific and societal priority. Renewed interest in further exploration and taxonomy could allow us to fully answer this most basic question: what lives on Earth?” 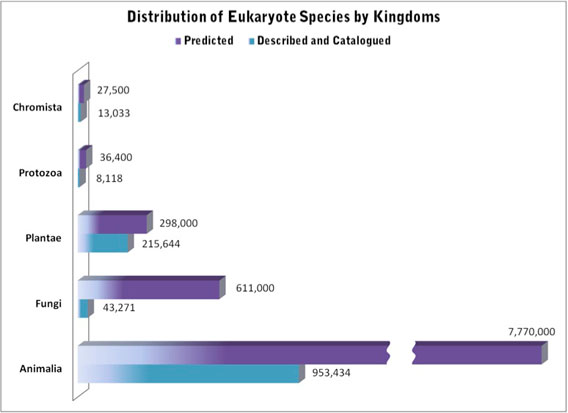 (06/27/2011) Scientists discovered more than 1,000 previously unknown species during a decade of research in New Guinea, says a new report from WWF. While the majority of 1,060 species listed are plants and insects, the inventory includes 134 amphibians, 71 fish, 43 reptiles, 12 mammals, and 2 birds. Among the most notable finds: a woolly giant rat, an endemic subspecies of the silky cuscus, a snub-fin dolphin, a turquoise and black ‘dragon’ or monitor lizard, and an 8-foot (2.5-m) river shark.