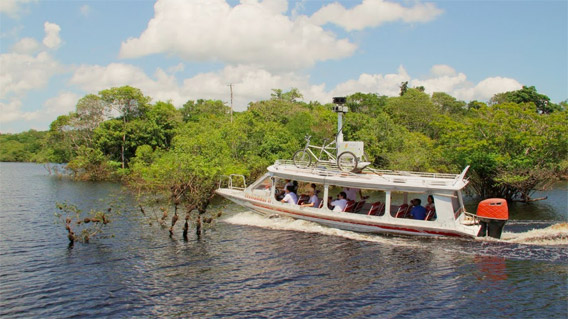 Google is adding addresses along sections of the Amazon River and Rio Negro in Brazil to its Street View service.

In partnership with the Amazonas Sustainable Foundation (FAS), an organization that has helped the Brazilian state of Amazonas develop and implement innovative forest protection projects, members of Google Earth Outreach and Street View are taking pictures of river communities and rainforest along the banks of two of the world’s largest rivers and adding them to Google Places and Google Maps. Google says the effort aims to provide the public with images of the region and build local capacity to use technology.

“We’re training some of FAS’s representatives on the imagery collection process and leaving some of our equipment behind for them to continue the work,” writes Karina Andrade of Google Street View on the Official Google Blog. “By teaching locals how to operate these tools, they can continue sharing their points of view, culture and ways of life with audiences across the globe.”

Googlers will also ride their Street View tricycles, which are equipped with cameras, through villages to capture images. 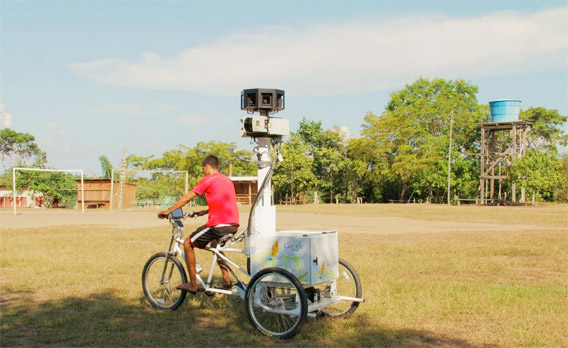 Google is also working to capture images of the Amazon rainforest from space. The search giant has teamed with researchers, non-profits, and indigenous tribes to develop and expand tools for mapping and monitoring Earth’s largest rainforest via Google Earth.

Google lends its massive computing cloud in fight against deforestation

(12/03/2010) Google officially launched Earth Engine, a technology platform that enables scientists using the search giant’s massive computing infrastructure to monitor and measure environmental changes. A group of scientific partners is already using the Earth Engine to track deforestation; map vegetation, biodiversity and water resources; and analyze fire patterns, but Google will open the platform to scientists around the world.

(11/29/2010) With world leaders meeting at climate talks in Cancun to discuss the future of forests, Google has added 3D trees to the latest version of Google Earth. Google has populated several major cities with more than 80 million virtual trees based on an automated process that identifies trees in satellite images. The realistic 3D representations are based on actual tree species found in urban areas. But Google has also extended realistic tree coverage to sites in some of the world’s most biologically diverse forests.

(12/18/2009) The Gordon and Betty Moore Foundation, the largest private funder of Amazon rainforest conservation, is playing an unheralded but integral role in the development of the Earth Engine platform, a system that combines the computing power of Google with advanced monitoring and analysis technologies developed by leading environmental scientists. The platform, which was officially unveiled at climate talks in in Copenhagen, promises to enable near real-time monitoring of the world’s forests and carbon at high resolution at selected sites before COP-16 in Mexico.