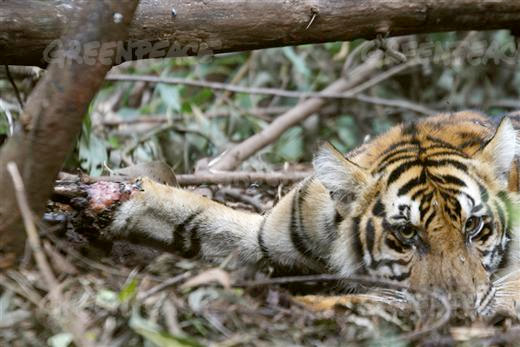 Caught in a snare and left for days without access to food and water, a wild Sumatran tiger (Panthera tigris sumatrae) perished from its wounds hours after forest officers reached it. As reported by Greenpeace—which photographed and filmed the rescue attempt—the tiger was trapped at the edge of a acacia plantation and remaining forest area actively being logged by Asia Pulp and Paper (APP) in Riau Province. Sumatran tigers are listed as Critically Endangered by the IUCN Red List; the subspecies, restricted to the Indonesian island, is in decline due to large-scale habitat loss and poaching.

APP responded quickly, saying that it had no part in the tiger’s death, which is says was caught by a snare set by ‘local villagers’ probably meant for other animals. Still, Greenpeace gathered evidence of clearcutting the forest 13 kilometers from the tiger’s last stand. Deforestation has many knock-off effects, one of which is that it allows people to access forest areas that were largely off-limits before. Trapping, poaching, and human-wildlife conflict tend to occur at the edges of deforested areas.

“Over the last 70 years Indonesia has lost the Balinese and the Javan tiger. The Sumatran tiger is the last to survive, although probably only a few hundred remain and all remaining populations are critically endangered,” Tom Maddox, country coordinator for Indonesia with the Zoological Society of London (ZSL), said. “As available habitat declines, the tigers that survive are increasingly coming into contact with people. Sometimes this leads to conflict as tigers kill livestock, or occasionally people, and local retribution is usually swift. Other times they will be caught in traps meant for other species, as appears to have happened in this case. These traps don’t kill the tiger immediately, but usually lead to a slow and very painful death from the injuries they inflict.”

WARNING: This video is disturbingly gruesome. It shows the pain, suffering, and death of a wild tiger in Sumatra.

But APP further contends in its statement that conflict between people and tigers is not due to their actions, but to Indonesia’s soaring population.

“Indonesia’s population of 240 million people is growing at over 1 percent per annum and placing considerable pressures on land use and leading to more human/animal conflict,” the group said in a statement.

It adds that it has spent millions on conservation efforts for the tiger and is ‘committed to this endangered species’. The company has invested in a tiger conservation initiative that calls for moving tigers from APP concessions to other rainforest areas. However since tigers are territorial simply dropping individuals from one area into another tiger’s territory is has raised questions among tiger experts. Such schemes have received a tepid response from scientists, conservationists, and environmentalists, who note that APP still intends to destroy far more forest than it claims to help protect. 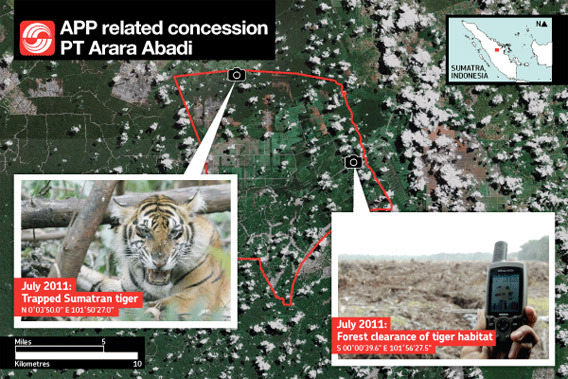 APP has been a target of environmental group for years for its ongoing role in forest clearing on Sumatra. APP suppliers control tens of thousands of hectares of natural forest and peatlands on the Indonesian island. The area is key habitat for not only Sumatran tigers, but is also home to some of the last traditional forest tribes in Indonesia. The group usually fires back, and this time is no different, that Indonesia is a developing country working to balance its environment with economic gain. In addition, it states since developed countries have developed ‘off the back of their natural resources’, Indonesia ‘is trying to do the same.’

“APP believes it is extremely irresponsible to blame a single company for the challenges that a whole country faces in developing a competitive and sustainable economy and urges all partners to work together to reach a sustainable forestry industry in Indonesia,” the company writes.

Yet APP fails to note that its concessions generate below-average employment on a per-hectare basis. APP’s corporate social responsibility (CSR) literature notes that it controls “only 1.3 percent” of Indonesia’s land mass. But APP employs substantially less than one percent of Indonesia’s workforce. Furthermore, APP subsidiaries are currently under investigation for tax fraud and failing to comply with environmental laws in Jambi and Riau provinces, further undercutting its claim of helping alleviate poverty in Indonesia.

Greenpeace has been pressuring a number of notable companies to stop purchasing pulp and paper from the company. Most recently, pressure from Greenpeace pushed LEGO Group to stop sourcing from APP for its toy packaging. Greenpeace is now working on pushing Hasbro, Mattel, and Disney to do the same. The activist group used DNA testing to determine that APP paper pulp was in the packages of Barbie and Transformer figures.

“This sad and startling footage shows the toll that rainforest destruction has on wildlife,” says Bustar Maitar, of Greenpeace South East Asia. “If APP weren’t trashing the rainforests of Indonesia to make packaging and paper, then endangered tigers would not be forced into closer contact with humans, and there’s much less chance that they’d get caught in traps like this one.”