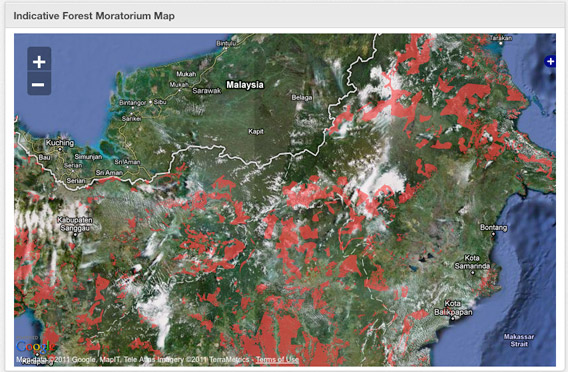 Researchers have launched a new tool to help policy-makers, NGOs, and landowners evaluate the potential benefits and costs of Indonesia’s reducing emissions from deforestation and degradation (REDD+) program at provincial and district levels.

“The tool basically allows anyone to explore how an indicative forest map might look under various scenarios,” Koh told mongabay.com via email. “It also calculates the carbon and opportunity cost implications.”

The REDD calculator includes a mapping function, which displays areas in Kalimantan protected under the moratorium.

“The coolest feature of this tool is the ability to produce, on-the-fly, an indicative map of forest moratorium areas based on user-specified moratorium scenarios,” Koh added. “By raising public awareness of the opportunities and costs of implementing the moratorium, this tool can help inform future discussions and debates concerning future REDD+ strategies in Indonesia.”

The REDD calculator is built on several layers of data including plantation and concession information from the World Resources Institute, Sekala, and the Ministry of Forestry of Indonesia; satellite imagery from NASA’s Moderate Resolution Imaging Spectroradiometer (MODIS), NASA Landsat, and the Daichi-Advanced Land Observing Satellite (ALOS); and field estimates of carbon stocks.

The authors conclude that while their effort has limitations “due primarily to data availability and quality”, it offers users a valuable tool in REDD+ analysis.

“Nevertheless, we reiterate that the main utility of our application is that it allows users to specify model scenario and alter model assumptions according to the best and most current data available to them,” they write. “We argue that this in and of itself is a valuable contribution to current discussions and debates concerning the implications and tradeoffs of REDD+ implementation in Indonesia and, indeed, across the developing tropics.”