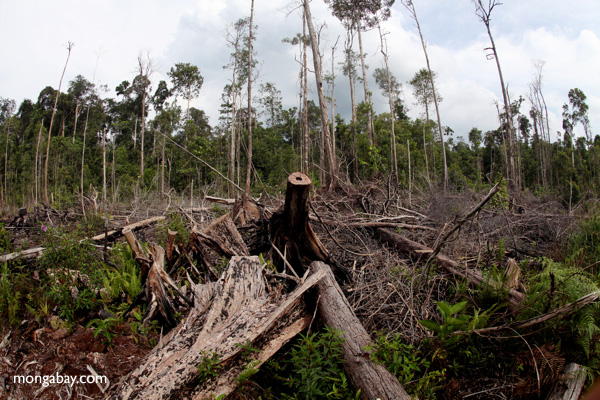 Indonesia’s forests were cleared at a rate of 1.5 million hectares per year between 2000 and 2009, reports a new satellite-based assessment by Forest Watch Indonesia (FWI), an NGO. Expansion of oil palm and wood-pulp plantations were the biggest drivers of deforestation, yet account for a declining share of the national economy.

The study, which compared year 2000 data with 2009 Landsat images from NASA, found that Indonesia’s forest cover declined from 103.32 million hectares to 88.17 million hectares in ten years. Since 1950 Indonesia lost more than 46 percent of its forests.

The study found evidence that Indonesian government is failing to meet its commitments to protect forests, showing that protected forests declined by 2 million hectares while forests designated for conservation declined 1.27 million hectares.

The study also looked at loss of peatlands, swampy ecosystems that store large amounts of carbon in their soil. It found that 2 million hectares of peatlands were destroyed between 2000 and 2009, nearly half of which occurred in Sumatra, where both the pulp and paper industry and the palm oil industry are expanding operations. Forests cover roughly half or 10.77 million hectares of Indonesia’s remaining peatland area.

FWI executive director Wirendro Sumargo told the Jakarta Post that while the report shows industrial plantations are the biggest cause of deforestation in Indonesia, the underlying driver is corruption.

“The root was our corrupt political and economic system. Government policy is often inconsistent and less strict, and it is therefore very easy for many parties (palm oil and pulp companies) to cause deforestation,” he was quoted as saying.

The report says that while deforestation rates remain high, forestry accounts for a declining share of the national economy. In 2008 forestry amounted to 0.79 percent of GDP, a figure that has since dropped 5 percent, according to the latest government data, which show that plantations (2.1 percent), pulp and paper (1 percent), and wood-based products and other forest products (1 percent) contribute only 4 percent to Indonesia’s GDP.

All figures in hectares