Between 1990 and 2007 global forests absorbed nearly one-sixth of all carbon released by fossil fuel emissions, reports a new study published in Science. The results suggest forests play an even bigger role in fighting climate change than previously believed.

The authors say the findings lend support to the Reducing Emissions from Deforestation and Degradation (REDD) program, which aims to create a financial mechanism to compensate developing countries for preserving and sustainably managing their forests. Yet the research also indicates the importance of forests in boreal regions, which store large amounts of carbon, especially in their soils.

“Our estimates suggest that currently the global established forests, which are outside the areas of tropical land-use change, alone can account for the terrestrial C sink,” the authors, led by Yude Pan of the U.S. Forest Service, write. “A large amount of atmospheric carbon dioxide has been sequestrated by the natural system of forested lands (~4.0 billion tons of carbon per year), but the benefit is significantly offset by the carbon losses from tropical deforestation (~2.9 billion tons of carbon per year). This result highlights the potential for Reducing Emissions from Deforestation and Degradation (REDD) to lessen the risk of climate change.” 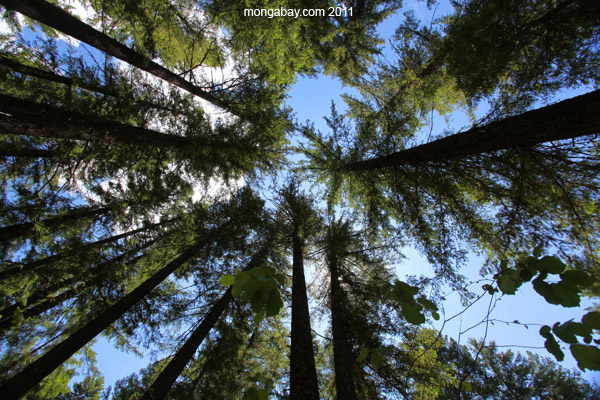 The authors suggest that a relative abundance of young forests should continue to offset carbon emissions in the future, although they warn that climate change could threaten the effectiveness of forests — especially in boreal and tropical regions — as carbon sinks.

“Because of the large carbon stocks in both boreal forest soils and tropical forest biomass, warming in the boreal zone and deforestation and occasional extreme drought, co-incident with fires in the tropics represent the greatest risks to the continued large carbon sink in the world’s forests,” they conclude.

(05/31/2011) Tropical forests across Latin America, Africa, and Southeast Asia stored 247 gigatons of carbon — more than 30 years’ worth of current emissions from fossil fuels use — in the early 2000s, according to a comprehensive assessment of the world’s carbon stocks. The research, published in the journal Proceedings of the National Academy of Sciences by an international team of scientists, used data from 4,079 plot sites around the world and satellite-based measurements to estimate that forests store 193 billion tons of carbon in their vegetation and 54 billion tons in their roots structure. The study has produced a carbon map for 2.5 billion ha (6.2 billion acres) of forests.

(01/01/2009) For all the fuss that is made about Tesla and the coming generation of electric cars, policy-makers should not overlook the importance of tropical forest conservation.