Commentary by Erik Meijaard on 1 June 2011

This commentary original appeared at the Jakarta Globe as Where Have All the Geckos Gone? and has been posted here with the permission of the authors. 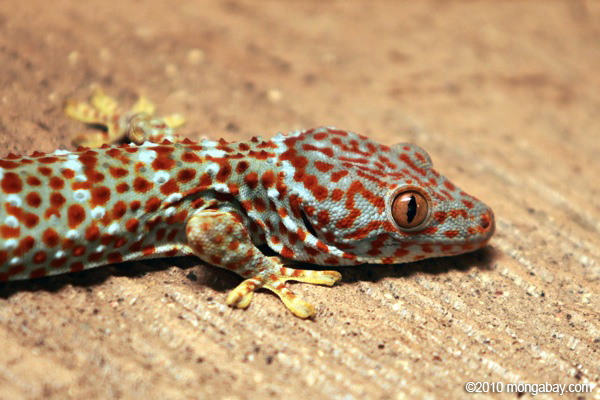 The call of the tokek, or gecko, is one of the most familiar sounds in Indonesia. Next to the smell of clove cigarettes, the calls to prayer, the friendly smiles and the ferocious afternoon rainstorms, it stands as one of the most easily identifiable characteristics of the country.

But when did you last hear a gecko call? When we recently considered this question, we couldn’t help but suspect that geckos are growing increasingly rare. We asked 65 Indonesian colleagues working in environmental research and natural resource management, and found that two-thirds of them felt that geckos were less common now than 10 years ago.

That observation bears out in several ways. Indonesian geckos are increasingly exported to China, Japan and other Southeast Asian countries, where their dried skins are used in medicine and skincare products. We recently spoke with a farmer near Yogyakarta who said collectors went everywhere in Java to buy up geckos.

A study in the journal Biodiversity & Conservation suggested that in 2006 the overseas trade in geckos from Java amounted to some 1.2 million dried specimens, greatly exceeding the quota of 25,000 set by Indonesian authorities.

Some of this has made the news. One recent story reported that workers in the East Java city of Probolinggo collect 3,000 tokeks each day, pocketing earnings of half a US dollar per gecko. The Sarawak Police recently raided a market that had geckos for sale originating from Pontianak, West Kalimantan.

All of this leads one to consider whether the gecko could actually disappear from Indonesia. After all, given the current notions of conservation and resource protection in the country, it isn’t far-fetched to think that the once ubiquitous gecko may one day fall silent.

Geckos are not protected here. Neither are they listed by the major conservation organizations as being endangered in Indonesia, which means that keeping, killing or selling them is, within limits, perfectly legal. This raises the question: If this trade is affecting gecko populations to the point that we can no longer hear their nightly calls, are the limits enough?

We talk a lot about the sustainable management of forests and seas in this country, which should mean that resources are managed so that we can keep harvesting and using them forever without changing their inherent qualities. At the same time we know that money talks, and that people will pursue short-term gains unless rules are in place to stop them.

It bears asking just how likely is it that the Department of Conservation in the Ministry of Forestry would ever act to reduce the trade and killing of a species like the gecko. If the failure to do anything meaningful for orangutans or tigers is anything to go by, we shouldn’t be holding our breath. And at least orangutans and tigers are furry, warm creatures that do well in the media. What does anyone know or want to know about the scaly anteaters, pythons, crocodiles and hundreds of bird species of Indonesia that have been collected to the point of near extinction in the wild?

Indonesia’s history of resource management is not one of overwhelming success. The country is facing a wildlife crisis, and not just because wildlife habitats are poorly managed and disappearing or being degraded, but also because Indonesia is killing and selling its wildlife to the point that populations are disappearing from even its most remote corners. Collective commitment from all Indonesians is the only way to stop this decline. In a democratic nation, the government plays a major role in convincing its electorate that the issue needs addressing.

It would be great if some visionary in the government could show the people what this country will look like in 25 years. Will it have any forests left and will the seas still be home to plentiful fish? Where will its people live and how well off will those people be? Will the gecko still call?

Perhaps the tokek offers an opportunity to build local conservation momentum. Much conservation in Indonesia is still pushed by outsiders, especially those caring about the most charismatic creatures. The challenge now is to envision a conservation movement that is truly supported by the local society. Maybe there would be associations of fishermen for the preservation of their most important fish resources. Or a group of Dayaks for sustainably managed pig populations, or an organization for the protection of wild stocks of favorite caged birds. Perhaps the Indonesian Tokek Society would exist. too.

In some ways, the gecko is symbolic for Indonesia. In popular lore this has long been true: When the loud “tokek” sound rings out at night, many people count the number of calls. An odd number means luck. Seven calls mean very good luck and fair weather the next day, and nine means the height of happiness and success.

But while the country traditionally believes in the good things that the species brings, it runs the risk of selling this luck for short-term financial gains.

The old balance between long-term happiness and luck and rapid economic progress needs to be reassessed, and Indonesians play a key role.

Erik Meijaard is a senior forest adviser for People and Nature Consulting International. Ramadhani Achdiawan is a researcher at the Center for International Forestry Research.