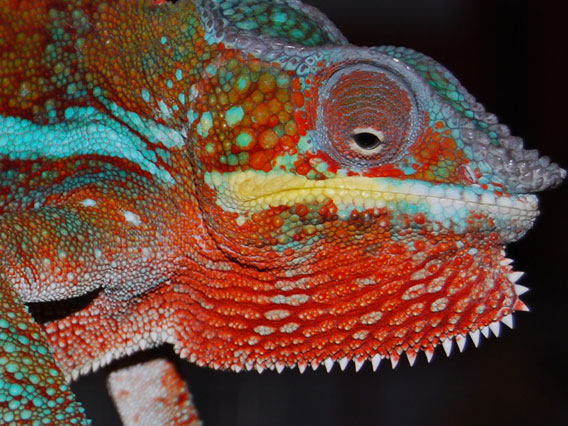 Conservation group TRAFFIC uncovered nearly 600 Madagascar reptiles and amphibians on sale in Thai markets, including endangered species and those banned for sale by the Convention on International Trade in Endangered Species of Wild Fauna and Flora (CITES). The animals, representing 24 reptiles species and 9 amphibians, are being sold for the international pet trade.

“We know there is a significant ongoing illegal trade in protected species from Madagascar, mainly destined for Asia, which has been exacerbated by the current political situation in the country leading to weaker enforcement of existing laws and safeguarding of protected areas,” says Richard Hughes, WWF’s Representative in Madagascar.

While the sale of some species Malagasy species is legal, TRAFFIC’s report found a number of discrepancies in paperwork, hinting at possible illegalities. Sixteen species of chameleon were found on sale in the 15-day survey of markets in Thailand. Documentation claims many of these chameleons were captive-bred in Kazakhstan, however no exports of chameleons are listed in Kazakhstan documents. In addition, many of the species are supposedly making their way from Kazakhstan to Lebanon and then on to Thailand. Yet the stopover in Lebanon is raising eyebrows among officials.

“If large-scale captive-breeding operations of Malagasy chameleons are indeed taking place in Kazakhstan, where did they source their breeding stock and why are many of the exports going via Lebanon, a country that is not a party to CITES?” points out Chris Shepherd, Deputy Director of TRAFFIC South-East Asia, in a press release.

However, a number of species were indisputably on sale illegally, including the Antsingy leaf chameleon (Brookesia perarmata), which is banned outright by CITES. TRAFFIC also uncovered the illegal sale of hundreds of turtles representing three Critically Endangered species, each banned by CITES: the radiated tortoise (Astrochelys radiata), spider tortoise (Pyxis arachnoids), and ploughshare tortoise (Astrochelys yniphora). Despite being almost wiped out in Madagascar, the radiated tortoise was the most frequent animal encountered during the survey.

While the bulk of Malagasy wildlife found in Thai shops were reptiles and amphibians, surveyors also found 12 lesser Madagascan tenrecs (Echinops telfairi) in a shop in Bangkok. Tenrecs are bizarre small insectivores about the size of hedgehogs, though more closely related to elephants, hyraxes, and dugongs.

The report also finds that the pet trade in Thailand is expanding well beyond traditional markets to online and private houses.

“A now mature and efficient network of dealers as well as both national and international clientele exist. In response to increased detection and surveillance, this network is able to function via the internet and from residential addresses without using public venues such as markets and shops. This has important implications for future surveying, monitoring and enforcement efforts by authorities, enforcement officials and NGOs,” reads the report.

Thailand is set to host the next CITES meeting in 2013.

(03/01/2011) Scientists have discovered a new population of the Belalanda chameleon (Furcifer belalandaensis), boosting hope for one of Madagascar’s rarest chameleons.

(01/03/2011) A lemur poacher was intercepted with 32 dead lemurs on New Year’s Eve in Madagascar’s northeastern town of Vohemar, suggesting that killing of lemurs for the commercial bushmeat trade continues on the island nation, reports Fanamby, a Madagascar-based conservation group.

(09/30/2010) One thousand endangered tortoises are being illegally collected each week in southern Madagascar, reports WWF.