Arctic on the line: oil industry versus Greenpeace at the top of the world 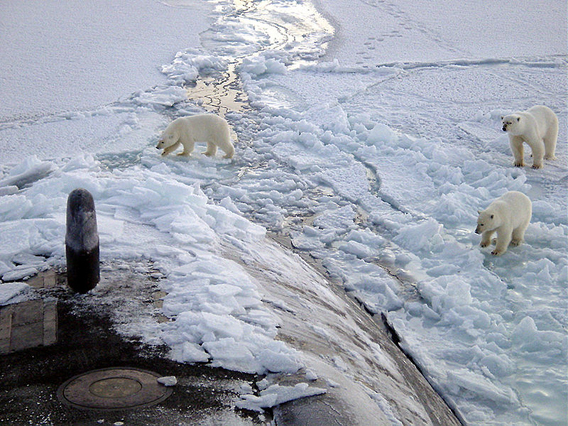 Not long ago such an image would have been impossible, but here polar bears meet a US attack submarine. US Navy Photo by: Chief Yeoman Alphonso Braggs, US-Navy.

At the top of the world sits a lone region of shifting sea ice, bare islands, and strange creatures. For most of human history the Arctic remained inaccessible to all but the hardiest of peoples, keeping it relatively pristine and untouched. But today, the Arctic is arguably changing faster than anywhere else on Earth due to global climate change. Greenhouse gases from society have heated up parts of the Arctic over the past half-century by 4-5 degrees Fahrenheit, leading to a staggering decline in the Arctic sea ice. The large-scale changes suffered by the Arctic have created a new debate over conservation and exploitation, a debate currently represented by the protests of Greenpeace against oil company Cairn Energy, both of whom have been interviewed by mongabay.com (see below).

With less sea ice, regions of the Arctic are suddenly accessible to industrial exploitation for oil and gas (the very fuels which have heated up the world, melting the Arctic). On the one hand, environmentalists and conservationists say the Arctic is a warning that the world must turn more quickly toward green sources of energy and leave major sources of fossil fuels, such as those in the Arctic, in the ground (or in this case deep under the sea), to avoid global disaster. On the other side, both big energy companies and small upstarts see a different green in the Arctic: cash.

This conflict—between conservation and exploitation—has been playing out in miniature over the past couple weeks at the top of the world. On the one side is an upstart Scottish-oil company, Cairn Energy, which has won the right to drill exploratory wells for oil in the waters of Greenland amid floating ice-bergs and frigid temperatures; on the other side is the non-violent activist organization, Greenpeace, whose activists are taking direct action against the oil company.

Two activists—enclosed in a survival capsule hanging from Cairn’s oilrig—halted drilling for four days before being arrested. In response, Cairn Energy has warned it will sue Greenpeace for nearly $3 million for every day lost. But Greenpeace was not cowed. On Saturday, 18 Greenpeace protestors scaled the oilrig to request to see Cairn Energy’s oil spill plan and were subsequently arrested.

Mongabay.com recently spoke separately to both Greenpeace through Graham Thompson, and Cairn Energy through Ellie Goss, but their respective interviews are posted here together. 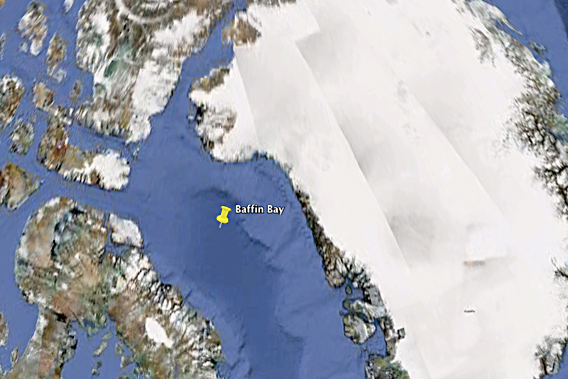 Cairn Energy has been given the go-ahead by Greenland, backed up by the Danish military, to drill for oil in Baffin Bay, shown here on Google Earth.

Mongabay to Greenpeace:
Greenpeace has described drilling in the Arctic as ‘dangerous lunacy’. Why?

Greenpeace:The risks from spills, which would take years to cap, and the consequences to the climate of burning the oil, are enormous.

Greenpeace:
They’re the only company drilling in the Arctic this year.

Mongabay:
What does Greenpeace hope to achieve by its actions in the Arctic against Cairn Energy?

Greenpeace:
Several things. Firstly, we’re calling for them to release their spill response plan, secondly we want to prevent them from drilling this year, as this may delay or even prevent a bigger oil rush from the oil majors, and thirdly we want to draw attention to the dangerous lunacy of drilling for oil in the Arctic, in the hope that saner voices will prevail and prevent this disaster in the making.

Mongabay to Cairn Energy:
Why pursue deepwater oil reserves in the Arctic?

Cairn Energy:
The Greenland Government has invited various companies to explore for hydrocarbons offshore Greenland. Cairn aims to set high standards in terms of the environmental and the social impact of its operations, which are comparable with the best in the industry. Across our operations our priority is on safety. A potential new and significant energy find offshore Greenland would benefit the Greenland people, communities and Government with valuable revenues. This year’s program is across a range of water depths from 300m to 1500m.

Mongabay: What are the particular challenges of drilling in such an area?

Cairn Energy: The Greenland Government has put in place stringent regulations. We have developed a plan which meets these regulations and continue to focus on safety as our first priority. This plan includes contracting two of the industry’s leading ice management companies with over 20 years experience of such work in similar environments and has developed and implemented a comprehensive ice management strategy. Dedicated vessels managed a total of 145 icebergs (on average, one or two a day) during the 2010 summer drilling campaign offshore Greenland.

Mongabay: What are your plans if an oil spill occurs? How would you deal with a spill if it’s still flowing once the ice freezes over?

Greenpeace (responding): If your plan is so reassuring, release it and reassure us.

Mongabay to Cairn Energy: You state on your site that “Cairn acknowledges the potentially adverse effects of climate change and understands the role we have as a responsible business in responding to them.” How does your role as one of the few companies drilling in the Arctic, much of which is only accessible due to climate change, connect to this?

Cairn Energy: Cairn seeks to minimise its emissions, effluents and wastes through careful monitoring and management. We aspire to maintain energy emissions relative to levels of hydrocarbon production and within the top quartile of Oil and Gas Producers (OGP) members. Cairn’s 2010 Greenhouse Gas emissions were 8% lower than the 2009 OGP average. It is important to note that there are a number of companies exploring and producing oil and gas in the Arctic region and have been doing so for a number of years.

Greenpeace (responding): The wider point here is that fossil fuels, like oil, are driving climate change. Unless we switch to cleaner sources of energy, we won’t be able to reduce our carbon emissions. So Cairn may claim that they are reducing their operational emissions, but there is a much bigger impact here, which they’re missing.

Mongabay to Greenpeace: Even if the world makes an aggressive U-turn to renewable energy, we would still require oil/gas for sometime in order to make the switch. Isn’t more oil/gas drilling then inevitable? 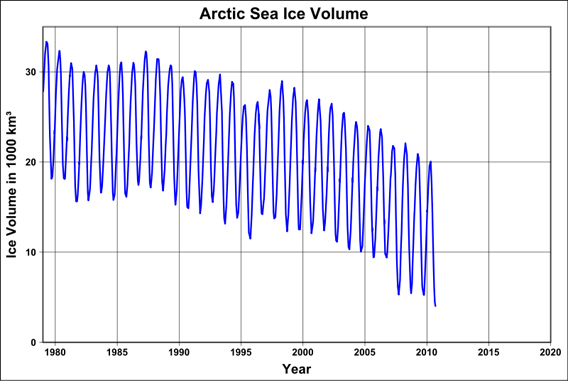 Scientists expect that the Arctic will be fully ice-free during summer sometime during this century. Graph by: Dominiklenne.

Greenpeace: We have more than enough gas and oil in our existing reserves to cause runaway climate change and destroy human civilization. What do we need more for?

Mongabay to Cairn Energy: How does Cairns respond to the fact that Greenpeace has sent two ships to your oil rig in the Arctic as a protest against the company’s action?

Note: Greenpeace has since taken direct action against drilling by Cairn, shutting down oil drilling for four days.

Cairn Energy: Cairn respects the rights of individuals and organizations to express their views in a safe and peaceful manner but would be concerned with any action that presents a risk to the safety of people and/or equipment. Wherever it is active, Cairn operates in a safe and prudent manner. The Greenland Bureau of Minerals and Petroleum has established some of the most stringent operating regulations anywhere globally, which mirror those applied in the Norwegian North Sea.

Greenpeace (responding): Greenpeace has been taking direct action at sea since long before Cairn started drilling for oil. Our safety record is exemplary. Would that the oil industry could make the same claim.

Mongabay to Greenpeace: How would Greenpeace like nations to move ahead in regards to the Arctic?

Greenpeace: We would like it to be declared a marine reserve, with no extractive industries allowed. We would also like to see a radical and urgent cut in global emissions to prevent climate change from devastating the Arctic environment.

Mongabay to Cairn Energy: Would you support expanding protected areas significantly in the Arctic given the sudden rush to exploit the oil and gas in the region?

Cairn Energy: Cairn is operating offshore Greenland at the invitation of the Greenland Government with a focus on safety both in terms of the environment and people and in keeping with industry best practice, Cairn is committed to avoiding work in any UNESCO World Heritage Site.

With pressure to drill, what should be saved in the Arctic?

(04/27/2011) Two major threats face the Arctic: the first is global climate change, which is warming the Arctic twice as fast the global average; the second is industrial expansion into untouched areas. The oil industry is exploring new areas in the Arctic, which they could not have reached before without anthropogenic climate change melting the region’s summer ice; but, of course, the Arctic wouldn’t be warming without a hundred years of massive emissions from this very same industry, thus creating a positive feedback loop that is likely to wholly transform the Arctic.

(03/24/2011) Providing more data on how climate change is impacting the Arctic, the maximum extent of sea ice this year was tied with 2006 for the lowest on record. Maximum sea ice simply means the territory the sea ice covers at its greatest point before the seasonal melt begins.

Another low record for Arctic ice in January

(02/08/2011) The extent of ice cover in the Arctic for January was the lowest on record, following another record-low in December for that month, according to the National Snow and Ice Data Center (NSIDC).

Greenland melt is the worst yet

(01/24/2011) Melting of the Greenland ice sheet was the most extreme yet in 2010, beating the previous melt record from 2007. This continues a long-term trend whereby melting in Greenland has increased on average 17,000 square kilometers every year since 1979.

(12/17/2010) Once thought of as a doomed species, new research published in the journal Nature and conducted by scientists from several institutions, including the National Science Foundation and the U.S. Geological Survey, finds that polar bears could be saved from extinction – if certain measures are taken.

(07/14/2010) In June the average sea ice extent in the Arctic was the lowest on record for that month, according to the National Snow and Ice Data Center (NSIDC). Measured by satellites, the seasonal movements of Arctic ice have been tracked since 1979 with a dramatic decline seen over the last 30 years. This decline is linked by climatologists to climate change.

High Arctic species plummeting across the board, others Arctic residents on the rise

(03/18/2010) Between 1970 and 2004 species populations in the high Arctic have declined by 26 percent, according to the first report by the Arctic Species Trend Index (ASTI). While this may be a natural cycle, scientists are concerned that environmental impacts such as climate change are worsening natural population fluctuations in the high Arctic. Declining species include lemmings, red knot, and caribou. “Rapid changes to the Arctic’s ecosystems will have consequences for the Arctic that will be felt globally. The Arctic is host to abundant and diverse wildlife populations, many of which migrate annually from all regions of the globe. This region acts as a critical component in the Earth’s physical, chemical, and biological regulatory system,” lead-author Louise McRae from the Zoological Society of London (ZSL) said in a press release.