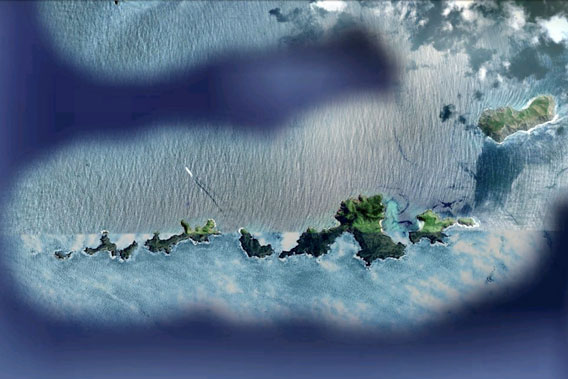 The Murciélago Islands are seven small islands off the northwest coast of Costa Rica in the Area de Conservación Guanacaste (ACG), home to one of the largest intact dry tropical forests in Central America. Despite this, few scientists have studied the biodiversity of these small uninhabited islands. A new study in the open access journal Tropical Conservation Science has attempted to rectify this gap by conducting the first survey of insects, specifically ants, on the islands. Researchers were surprised at the richness of ant species on the island: 50 species were documented, only two of which were invasive species.

“Even with the extremely dry conditions that occur during at least half of the year, low diversity of vegetation, and human disturbance, we found a greater number of ant species than expected on the Islas Murciélago,” the authors write.

The islands suffer under drastic seasonal change: lush and green in the wet season, they become desert-like during the dry season when they are pounded by desiccating trade winds. The researchers found that these extreme seasons play a big role in ant behavior on the island. They found more ant species on islands in the wet seasons, mainly in the leaf litter. During the dry ants were harder to detect and less active.

Jennifer Jacobs, lead author of the paper with the University of California, Berkeley, told mongabay.com that the trade winds during the dry season made it so difficult to land boats that, at times, researchers had to abandon them and swim for the islands. However, the researchers speculate that the winds could’ve played a role in allowing mainland ants to colonize the islands.

“Interestingly, it is possible that these trade winds actually facilitate the arrival of reproductive ants coming from mainland regions of Costa Rica,” the authors write, adding that “[…] We observed queens of one species, never collected in our samples, blowing in with a storm and landing on the highest peak of Isla San José.”

Still, more research would need to be done to confirm the role of wind in this case.

Although the Murciélago Islands are protected by law, they are threatened by human impacts, including fire and invasive species.

“Fishermen have long used at least some of these Islands and continue to do so illegally. Fishermen have historically camped on these Islands and there is ample evidence of runaway camp fires that have burned and eliminated portions of forest (in one case, all of the forest) on some of the Islands,” write the authors. The lowest diversity of ant species were found on the island which had lost it forest to fire: Isla Colorada.

The scientists recommend further research efforts on the islands, including repeating their study down the road to document environmental changes to ant communities, especially in the face of climate change.

“The Islas Murciélago represents a globally unique and highly threatened habitat, as uninhabited tropical dry forest islands are uncommon. The protection of these Islands is important for marine and terrestrial biodiversity, and though the Islands and their surrounding waters have not been thoroughly inventoried, unique floral and faunal assemblages have been documented in the region,” write the researchers.

(06/12/2011) While few would question that conserving a certain percentage of land or water is good for society overall, it has long been believed that protected areas economically impoverish, rather than enrich, communities living adjacent to them. Many communities worldwide have protested against the establishment of conservation areas near them, fearing that less access and increased regulations would imperil their livelihoods. However, a surprising study overturns the common wisdom: showing that, at least in Thailand and Costa Rica, protected areas actually boost local economies and decrease poverty.

(11/11/2009) Costa Rica is considered by many to be a shining example of environmental stewardship, preserving both its terrestrial and marine biodiversity while benefiting from being a popular tourist location. However, a new move by the Costa Rican government has placed their reputation in question. In May of this year the President of Costa Rica, Oscar Arias, presented a law to the legislature that would downgrade Las Baulas from a National Park to a ‘mixed property wildlife refuge’. The downgrading would authorize a number of development projects that conservationists say would threaten the park’s starring resident: the leatherback turtle.

Conservation through commerce in Costa Rica

(05/25/2009) While Costa Rica is lauded for its conservation ethic, environmental concerns remain in the country. Overdevelopment is tied to many issues, including pollution, degradation of ecosystems, deforestation, and soil erosion, while unsustainable fishing plagues coastal waters. Costa Rica’s wildlife is also directly affected by hunting as crop and livestock pests, predation and displacement by introduced species, and the illegal pet trade.