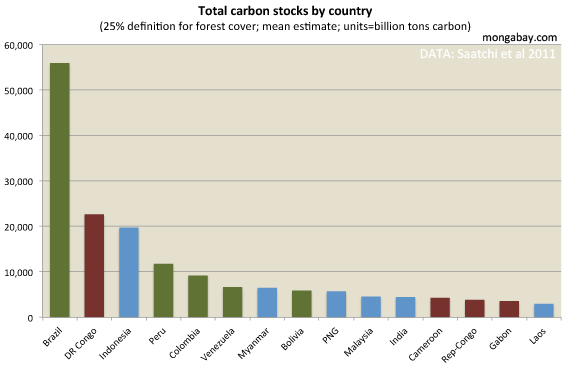 Forests in sub-Saharan Africa account for roughly a quarter of total tropical forest carbon, according to a comprehensive assessment of the world’s carbon stocks published in the journal Proceedings of the National Academy of Sciences (PNAS).

The study, based on remote sensing data and field surveys of 75 calibration plots, came up with estimates of forest cover and carbon storage based on varying definitions of what constitutes forest. Using the broadest definition of 10 percent tree cover, forests cover 775 million hectares, or 36 percent, of sub-Saharan Africa. Using a 30 percent tree cover cutoff, sub-Saharan Africa’s forest extent amounts to 447 million hectares, or 21 percent.

The researchers estimate sub-Saharan Africa’s forests contain 44-66 billion tons of carbon, depending on how forests are defined. Nearly 80 percent of the carbon is stored in aboveground biomass or vegetation consisting of leaves, branches, and tree trunks.

Unlike other tropical forest regions, nearly three-quarters of Africa’s forests are distributed in woodland savannas and dry forests that contain less than 100 tons of carbon per hectare. Extremely carbon-dense forests, which store more than 350 tons of carbon in aboveground biomass per hectare, account for 8.7 percent of sub-Saharan Africa’s total stored carbon.

Unsurprisingly, the forests of the Democratic Republic of Congo are the most extensive and store the most carbon of any African country, accounting for 26-37 percent of forest cover (depending on how forest is defined) and 38-56 percent of carbon. Three other Congo Basin countries — Cameroon, Republic of Congo, and Central African Republic — follow.

The new carbon data indicate that deforestation in Africa produces proportionately fewer emissions than estimated by the Food and Agriculture Organization of the United Nations (FAO).

FAO estimates are based on the assumption that African forests store one-third of tropical forest carbon and accounted for 30 percent of deforestation between 2000 and 2005. By comparison, the PNAS study, combined with remote sensing work by Matt Hansen of South Dakota State University, which put Africa’s share of tropical deforestation at less than 6 percent from 2000-2005, suggests that Africa’s forest loss is a considerably smaller driver of climate change than conventionally thought.

(05/31/2011) Tropical forests across Latin America, Africa, and Southeast Asia stored 247 gigatons of carbon — more than 30 years’ worth of current emissions from fossil fuels use — in the early 2000s, according to a comprehensive assessment of the world’s carbon stocks. The research, published in the journal Proceedings of the National Academy of Sciences by an international team of scientists, used data from 4,079 plot sites around the world and satellite-based measurements to estimate that forests store 193 billion tons of carbon in their vegetation and 54 billion tons in their roots structure. The study has produced a carbon map for 2.5 billion ha (6.2 billion acres) of forests.