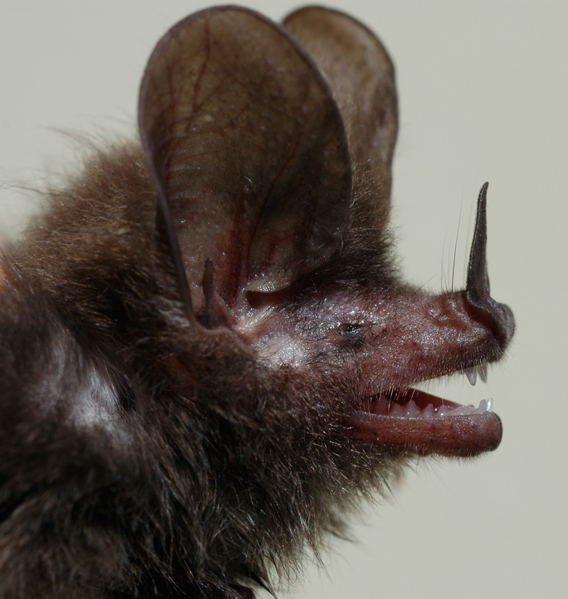 New bat species from St. Vincent has been named Garifuna bat. Photo by: Peter A. Larsen.

Researchers have declared a new species of bat from the Caribbean island of St. Vincent. While the new bat had been documented before, it was long believed to be a member of a similar species that is found throughout South America and a few Caribbean Islands, that is until PhD student Peter Larsen noticed it was far larger than its relative down south.

“A year or so went by [after collecting the species] and I happened to look at this species […] and compared it to what we thought it was–a species from Trinidad. But the St. Vincent bat was huge comparatively speaking,” said Larsen, who is studying at Texas Tech University, in a press release.

Larsen told mongabay.com that the bat is “a few grams heavier and is a few millimeters longer in most measurements that we took” than its closest relative the aptly named little big-eared bat (Micronycteris megalotis). While this may not sound like much, the nre bats weigh only around 8 grams and measure around 30 millimeters, so a few grams and millimeters here or there makes a big difference in these animals.

The paper describes the bat as “medium-sized” in comparison to the nine or so other known species of Micronycteris bats.

Researchers believed the new bat species became stranded from the mainland population between 600,000 and a million years ago, theorizing that sea-level rise due to melting glacier eventually cut St. Vincent off. Once stranded, the bat species took its own evolutionary path, including becoming noticeably larger and changes in its cranium.

Larsen and his team decided to name the species the Garifuna big-eared bat (Micronycteris garifuna) after the Garifuna people who inhabit St. Vincent and other areas of the Caribbean and Central America. The Garifuna ancestry includes native Carib, Arawak, and West African.

The Garifuna bat preys on insects, providing an ecosystem service to the island by keeping insect populations in check. In fact, according to another graduate student, Lizette Siles, who worked on the study, the Garifuna bats are especially adept hunters.

“They can actually pick their insect prey off the surface of rocks and leaves,” Siles explained in a press release. “Not all insectivores can do that, because most insectivores catch their prey on the fly. Their big ears, wide wings and membranes between the rear feet and tail allow them to maneuver better.”

Bats are one of the most diverse mammal families in the world (second only to rodents) with around 1,100 known species. Although they are often unfairly loathed by people, they provide a number of important services including pest control and seed dispersal.

Thousands of new species are discovered every year, but new mammals are among the least likely. In 2008, researchers documented the discovery of 18,225 new species, only 41 (0.22 percent) of which were new mammals. 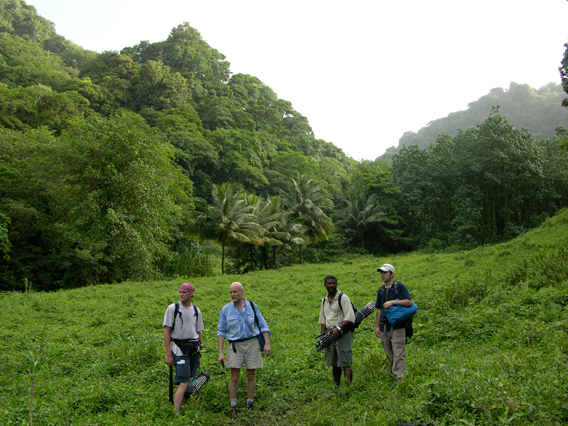 (05/23/2011) If we had to characterize our understanding of life on Earth as either ignorant or knowledgeable, the former would be most correct. In 250 years of rigorous taxonomic work researchers have cataloged nearly two million species, however scientists estimate the total number of species on Earth is at least five million and perhaps up to a hundred million. This means every year thousands of new species are discovered by researchers, and from these thousands, the International Institute for Species Exploration at Arizona State University selects ten especially notable new species.

(05/18/2011) Remote little-explored rainforests probably harbor the majority of undiscovered amphibians and land mammals according to a new study in Proceedings of the Royal Society B. The study calculated that it’s likely 33% of the world’s amphibians and 3% of terrestrial mammals still remain unknown. However, the paper also found that these undiscovered species are likely in worse peril of extinction than already-described species.

New bat species confirmed in Ecuador, may already be extinct

(11/16/2010) Although the first specimen was collected over 30 years ago, scientists have only now confirmed that a tiny brown bat is indeed a unique species. Named Myotis diminutus for its incredibly small size, the new bat was discovered in the Chocó biodiversity hotspot, amid the moist forests of western Ecuador.