Tropical forests across Latin America, Africa, and Southeast Asia stored 247 gigatons of carbon — more than 30 years’ worth of current emissions from fossil fuels use — in the early 2000s, according to a comprehensive assessment of the world’s carbon stocks.

The research, published in the journal Proceedings of the National Academy of Sciences by an international team of scientists, used data from 4,079 plot sites around the world and satellite-based measurements to estimate that forests store 193 billion tons of carbon in their vegetation and 54 billion tons in their roots structure. The study has produced a carbon map for 2.5 billion ha (6.2 billion acres) of forests.

According to the study, forests in Latin America account for 49 percent of the total carbon stock, followed by forests of Southeast Asia (26 percent), and Africa (25 percent). Brazil’s forests accounted for nearly a quarter of total biomass measured in the study. Democratic Republic of Congo (9.8 percent), Indonesia (9.3 percent), Peru (4.9 percent), and Colombia (4.1 percent) rounded out the top five countries, which together accounted for more than half (52.8 percent) of tropical forest biomass.

The paper notes that while more precise airplane-based systems for mapping carbon stocks have been developed, these are presently too expensive to implement on large scales. Therefore the authors say their map can be used for national- and project-scale assessments of greater than 10,000 hectares (24,700 acres).

The data for the study dates to the early 2000s — forest extent and biomass would be lower today due to deforestation. Nevertheless the findings could serve as a benchmark for efforts to measure reductions in greenhouse gas emissions under the Reducing Emissions from Deforestation and Degradation (REDD) program, which aims to compensate developing countries for protecting forests and peatlands.

“The benchmark map can also be used to assist countries in assessing the carbon emissions that are likely to be avoided by implementing different policies and programs aimed at reducing deforestation and forest degradation at regional and project scales,” the authors write. “The map will assist developing country governments, land managers, policy makers, and civil society to become more informed about the likely result of their policies and programs in reducing national greenhouse gas emissions from the land-use sector.” 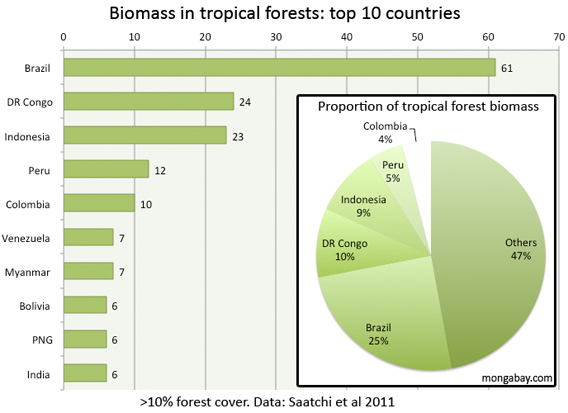 (01/01/2009) For all the fuss that is made about Tesla and the coming generation of electric cars, policy-makers should not overlook the importance of tropical forest conservation.