New eco-tour to help save bizarre antelope in ‘forgotten’ region 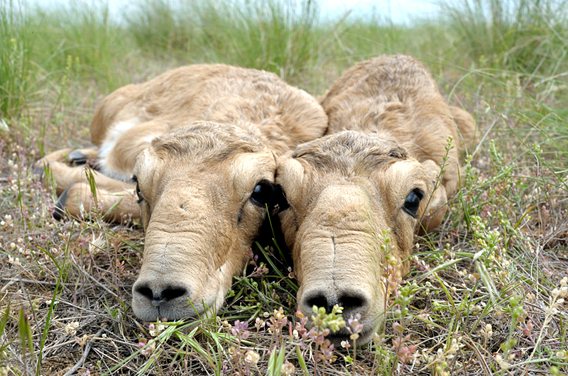 Imagine visiting a region that is largely void of tourists, yet has world-class bird watching, a unique Buddhist population, and one of the world’s most bizarre-looking and imperilled mammals: the saiga. A new tour to Southern Russia hopes to aid a Critically Endangered species while giving tourists an inside look at a region “largely forgotten by the rest of the world,” says Anthony Dancer.

Few species have fallen so far and so fast in the past 15 years as Central Asia’s antelope, the saiga. Its precipitous decline is reminiscent of the bison or the passenger pigeon in 19th Century America, but conservationists hopes it avoids the fate of the latter. Not long ago, a million and a quarter saiga roamed the Central Asian plains; today there are less than 50,000. To make matters worse, 12,000 saigas perished last year in Kazakhstan of disease.

“The causes [of the overall decline] are complex but a combination of the collapse of rural economies following the breakdown of the Soviet Union in 1991, and the reopening of the border with China in the late 1980s, led to extensive and unregulated poaching” for food and for traditional Chinese medicine, explains Dancer, an ecology student at Imperial College in London, who works with the Saiga Conservation Alliance (SCA).

With SCA, researchers in the saiga’s remaining range nations—Russia, Kazakhstan, Mongolia, Turkmenistan, and Uzbekistan—have set up a number of innovative programs to help save the species, including captive breeding, new regulations and laws, anti-poaching work, and local education and awareness. Now, they are trying something new: eco-tourism to the rarely visited region of Southern Russia.

Few people outside of these countries have ever seen a wild saiga, let alone Asia’s great steppe. But now they will have a chance not only to visit these unique ecosytems, but to experience just as unique little-known cultures. Organized by Saga Voyages, the tour, heading off this August, will allow visitors to experience the steppe along with Russia’s Volga Delta and the Rostov wetlands.

The tour will bring much-needed revenue to the region, including some funds to keep conservation programs going, but Dancer hopes it will provide something more.

The tour will help the saiga “by just taking an interest in a species and a region of which
many are unaware. It still surprises me that they have been so neglected. It’s a beautiful area with fascinating fauna and flora and intriguing cultures […] It also shows local communities that the saiga is valued internationally beyond its horns.”

As for the wonderfully bizarre face of the saiga, Dancer responds, “my mother says they have a face that only a mother could love, but personally I think they’re remarkably beautiful.” 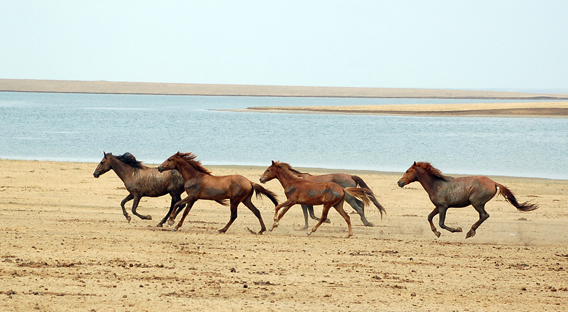 Mongabay: What are saiga?

Anthony Dancer: A unique and Critically Endangered nomadic antelope that inhabits the great plains of Central Asia and Russia. Saiga are a relict of the ice age fauna that included mammoths and sabre tooth cats, with fossils found as far afield as North America. As recently as the early 1990s one million migrated across the open steppe in vast herds.

My mother says they have a face that only a mother could love, but personally I think they’re remarkably beautiful. Their distinctive nose is thought to be an adaption for the extreme environment they inhabit—warming and moistening inhaled air in the fierce winters and filtering dust particles in the arid summers. But it’s also surprisingly mobile. Male saiga also have translucent, amber horns which are prized in Southeast Asian countries for use in traditional Chinese medicine.

Seen in the wild they’re really quite captivating. Their large, dark eyes are alert and watchful and at the slightest disturbance they race across the steppe at speeds of up to 80 kilometres and hour.

Mongabay: What has happened to the saiga population? What is currently threatening them?

Anthony Dancer: The saiga suffered a catastrophic population decline in the 1990s which resulted in a 95% reduction in numbers—an astonishing and sad record. The causes are complex but a combination of the collapse of rural economies following the breakdown of the Soviet Union in 1991, and the reopening of the border with China in the late 1980s, led to extensive and unregulated poaching.

Poaching provided an alternative source of income and food albeit illegal. The situation was exacerbated by preferential targeting of males for their horns for use in traditional Chinese medicine, skewing sex ratios and leading to widespread reproductive failure in the early 2000s.

Indeed poaching is still an ongoing and major concern for all saiga, driven by struggling economies and high unemployment. It’s by no means the only threat, however, with habitat degradation, breakdown of traditional migration routes and competition for grazing all taking their toll.

In recent years the situation improved thanks to international conservation efforts and a multi-lateral agreement between saiga range states to address the problem. In some populations, but not all, declines had been stopped and numbers stabilized.

Unfortunately the past year has seen a number of catastrophes, which are potentially devastating for populations that are still small and vulnerable. These include a particularly hard winter in Russia, a mass die-off of 12,000 saiga from disease in Kazakhstan, and a potential halving of the transboundary Ustiurt population from renewed heavy poaching. This only serves to demonstrate that this species is still at severe risk of extinction in the wild if conservation efforts are not stepped-up. Saiga antelope have the reproductive capacity to renew population numbers rapidly if we could just provide them the protection to do so.

Mongabay: Why use ecotourism as a way to aid the embattled saiga population?

Anthony Dancer: The most effective and most efficient conservation efforts are built on sustainable, long-term, incentive-driven solutions which empower local communities to manage their own resources. Poaching is the main threat to saiga populations but it is driven by the need for income in regions that have been largely forgotten by the rest of the world.

Ecotourism has great potential to address these issues by directly contributing to conservation activities and by providing revenue to the local community—stimulating the economy and enhancing the value of their natural resources. Responsibly managed tourism can empower local communities to take control of their own destinies by providing alternative sources of income, whilst reducing pressure on the environment and raising international awareness. It can also stimulate national governments to invest in enforcement.

Mongabay: How can tourists expect to help conservation efforts?

Anthony Dancer: In a number of ways, but first of all by just taking an interest in a species and a region of which many are unaware. It still surprises me that they have been so neglected. It’s a beautiful area with fascinating fauna and flora and intriguing cultures. The act of taking an interest and telling other people raises the profile of the species and helps to direct attention to where it is needed. It also shows local communities that the saiga is valued internationally beyond its horns.

The main input from tourists is, of course, the money that they spend. This helps conservation efforts on a number of levels. This tour in particular directly supports local conservation projects, but it is also run and arranged by a local tour company and draws on local facilities, dispersing tourist spend throughout the economy.

Mongabay: Why is it important for locals to see success from conservation and tourism efforts?

Anthony Dancer: The saiga antelope has been culturally significant to steppe peoples for centuries. Its loss would be a great blow. The collapse of the rural economy however is beyond their control. Initiatives such as this allow the community to find value in their natural resources, encouraging the sustainable management of saiga antelope and the steppe and providing income where it is needed most.

Mongabay: Besides saiga what other wildlife can tourists hope to encounter on the trip?

Anthony Dancer: The region in Southern Russia that we will be visiting is wonderfully biologically diverse area with a surprisingly wide variety of ecosystems, including the river landscape of the Rostov region, the arid semi-dessert of the steppes and the lush Volga Delta.

Aside from the saiga, birds are undoubtedly the highlight of the trip. The Rostov wetlands form part of one of Eurasia’s biggest flyways for migrating birds providing opportunities to see a plethora of avifauna including graylag geese, shelducks, pochards, great white pelicans, Dalmatian pelicans, Eurasian spoonbills, glossy ibises, great cormorants and white-tailed eagles. The steppe also is home to a variety of rare and common birds including tawny eagles, long-legged buzzards, great bustards, demoiselle cranes, curlews and bee-eaters. The Volga Delta is an exceptional and lush micro-environment with spectacular fields of lotus blossoms, which are in full bloom when we visit, and birdlife such as the Caspian tern and red-footed falcon.

It’s not all birds however: wild mustangs roam the Rostov Biosphere Reserve and there are a variety of steppe rodents and their predators such as the steppe polecat. You might even see the steppe wolf, which is known to predate saiga antelope.

I would also emphasize that this is not just a tour of the region’s wildlife. The cultures of the steppe are equally fascinating and deserve just as much attention. The city of Astrakhan has a rich and visible history and the Republic of Kalmykia is the only official Buddhist state in Europe. The Kalmyks, who migrated to Russia from China in the 17th century, are of Mongolian origin and practice Tibetan Buddhism.

Mongabay: Why are saiga, in abundance, important to the steppe ecosystem?

Anthony Dancer: Migratory species, especially ungulates like the saiga, have significant impacts on community dynamics and ecosystem processes. They enrich the communities they pass through on a predictable basis, with important implications for competitors, predators and disease transmission. They also impact nutrient cycles and productivity. Saiga in particular are thought to play a central role in maintaining the soil fertility of the region’s fragile steppe ecosystem. These effects cascade down through trophic levels, with unpredictable consequences when disrupted.

It’s also worth considering the socio-economic impacts of their loss. The saiga antelope has been a symbol of the steppe for the nomadic people it shares its habitat with for centuries, with great economic and cultural value. Flagship species such as these are incredibly valuable as they can help provide protection for the entire ecosystem. Without the saiga the steppe would be considerably impoverished. 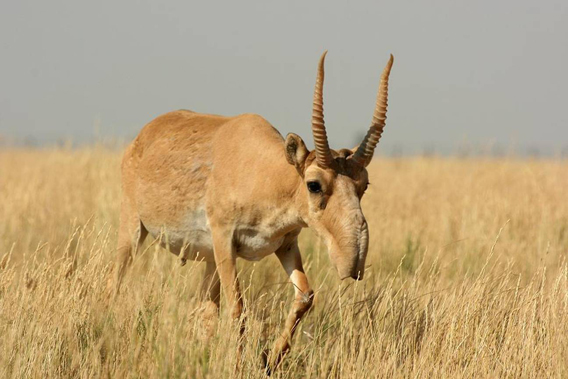 Male saiga in the steppe . Photo by: Navinder Singh. 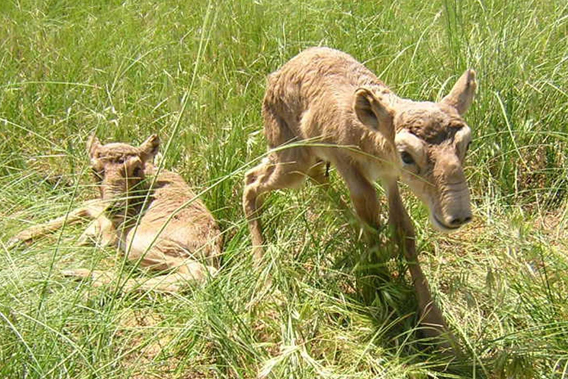 After declining 95% in 15 years, Saiga antelope begins to rebound with help from conservationists

(09/20/2009) In a decline on par with that suffered by the American bison in the Nineteenth Century, in the 1990s the saiga antelope of the Central Asian steppe plummeted from over one million individuals to 50,000, dropping a staggering 95 percent in a decade and a half. Since then new legislation and conservation measure have helped the species stabilize in some areas but in others the decline continues. Working for six years with the Saiga Conservation Alliance, Founding Member and Executive Secretary Elena Bykova has helped bring the species back from the very brink of extinction.

(06/10/2010) The Ural population of the Critically Endangered saiga, a curious-looking Asian antelope, has been decimated by an unknown assailant. 12,000 saigas, mostly females and their calves, were found dead in western Kazakhstan reports the Saiga Conservation Alliance.

(06/03/2009) Watch any nature documentary and it’s sure to include pulse-pounding footage of large herbivores migrating across African plains, Asian steppe, or the Arctic tundra. The images have become iconic: wildebeest forging a crocodile-inhabited river, caribou breaking through snow fields, Saiga running over tall grass. Despite such images of plenty, migrations are declining across the world, and in six cases have disappeared entirely.