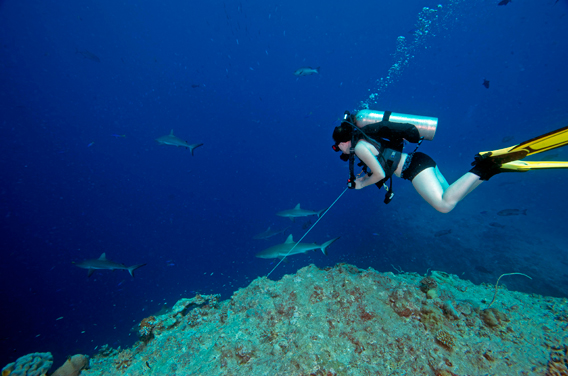 For the Pacific island nation of Palau, sharks are worth much more alive than dead. A new study by the Australian Institute of Marine Science (AIMS) has found that one reef shark during its full life is worth $1.9 million to Palau in tourism revenue. Sold for consumption the shark is worth around $108. In this case a shark is worth a stunning 17,000 times more alive than dead.

“Sharks can literally be a ‘million-dollar’ species and a significant economic driver,” explained Mark Meekan, principal research scientist at AIMS, in a press release. “Because of their low rates of reproduction and late maturity, shark populations have been driven into a global decline due to fishing. Yet our study shows that these animals can contribute far more as a tourism resource than as a catch target.”

In total, the study found that shark tourism brings in $18 million to the island nation a year (8% of the country’s gross domestic product), making each shark worth around $180,000 annually.

An increasingly popular Asian delicacy, shark-fin soup is exactly what its name suggests. Sharks are caught, their fins sawed off, and often the animals’ bodies—sometimes still alive—are thrown back into the water. Shark finning alone is estimated to have killed an average of 38 million sharks per year between 1996 and 2000.

In 2009, Palau declared its waters as a ‘shark sanctuary’, completely off-limits to shark fishing and finning. Since then it has declared whales, dolphins, and dugongs off-limits as well, making it one of the most progressive marine conservation nations in the world.

“Shark tourism can be a viable economic engine,” said Matt Rand, director of Global Shark Conservation for the Pew Environment Group, which commissioned the research. “Overfishing of sharks can have disastrous effects on ocean ecosystems, but this study provides a compelling case that can convince more countries to embrace these animals for their benefit to the ocean and their value to a country’s financial well-being.”

The study looked solely at a shark’s worth for tourism, and not at the economic worth of ecological services provided by sharks. As top predators sharks play a major role in marine ecosystems.

(11/17/2010) A shark sanctuary has been declared around the Raja Ampat islands in Indonesia. Larger than Denmark, the new sanctuary covers 17,760 square miles (46,000 square kilometers) of one of the world’s richest marine biodiverse region, the Coral Triangle. Protections not only cover sharks, but dugongs, marine turtles, mobulas, and manta rays as well. In addition, reef bombing and fishing for the aquarium trade are banned.