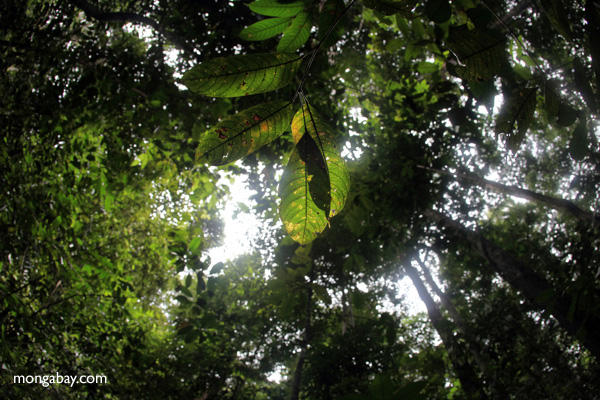 After five-and-a-half months of delay due to lobbying and political debate, Indonesian President Susilo Bambang Yudhoyono finally signed a two-year moratorium on the granting of new permits to clear rainforests and peatlands, reports Reuters.

But details of the moratorium, which was a condition under Indonesia’s billion dollar forest conservation partnership with Norway and was supposed to be signed January 1, won’t be released until Friday, leaving it unclear what types of forest will be protected from logging and conversion to plantations. The moratorium will certainly include primary forests, but natural forests that have high conservation value and carbon stocks may still be left on the chopping block.

The oil palm, logging, and pulp and paper sectors have lobbied intensely to define the moratorium as narrowly as possible, while some environmentalists have sought to set a bar based on the carbon storage of a forest, a target that would include both primary and secondary forests. Either way, some observers say the moratorium will have little impact in practice because millions of hectares of forests and peatlands are already concessioned. For example, analysis of concession data by WWF-Indonesia found that pulp and paper companies in Sumatra’s Riau Province alone control a 1.2 million hectares of forest that would be exempt from the moratorium. Converting this area of forest to wood-pulp plantations would generate hundreds of millions in greenhouse gas emissions, while putting endangered species like Sumatran orangutans, tigers, and elephants at greater risk.

Nevertheless the moratorium is seen as an important step toward Indonesia meeting its commitment of reducing carbon dioxide emissions by at least 26 percent from a projected 2020 baseline. Indonesia is presently the third largest greenhouse gas emitter after China and the United States due primarily to degradation of peatlands and deforestation.