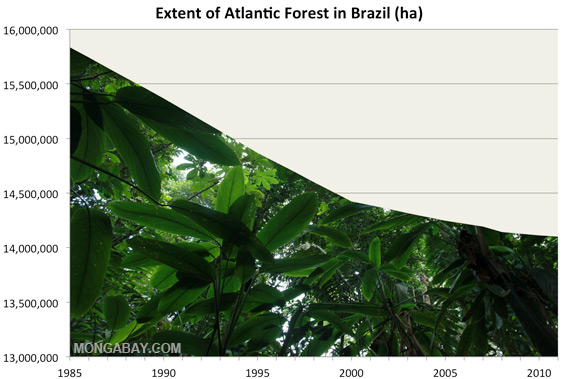 Deforestation of Brazil’s most threatened forest ecosystem dropped substantially during the 2008-2010 period according to new data released by Brazil’s National Institute for Space Research (INPE) and Fundação SOS Mata Atlântica.

Analysis of satellite images across 16 of the 17 states the Atlantic Forest spans found that 312 square kilometers of forest was cleared between 2008 and 2010, down from 1,029 square kilometers between 2005 and 2008. Deforestation was concentrated in the states of Minas Gerais, Bahia, Santa Catarina and Parana.

The new assessment finds only around eleven percent — 141,000 square kilometers — of the Atlantic Forest or Mata Atlântica remains intact. Logging and conversion for agriculture and cattle ranches have been the primary drivers of deforestation of the Mata Atlântica, which is a key source of water for some of Brazil’s richest and most populous states.

“We depend on natural resources and environmental services of the Atlantic that are essential for the survival of the 112 million people in the field of biome,” said Marcia Hirota of Fundação SOS Mata Atlântica in a statement.

In an effort to slow destruction of the Mata Atlântica, in November 2008 Brazilian president Luiz Inacio Lula da Silva signed a decree to protect and restore the ecosystem to 20 percent of its original cover. INPE, Brazil’s space agency, has since extended its advanced deforestation monitoring system to the region in an effort to measure emissions and catch deforesters.

But a new bill that aims to revise Brazil’s Forest Cost could undermine efforts to protect the Mata Atlântica, according to Mario Mantovani of the Políticas Públicas da Fundação.

“The approval in the House of Representatives of the proposed changes to the Forest Code only worsen the already dramatic situation of the Atlantic,” Mantovani said in a statement. 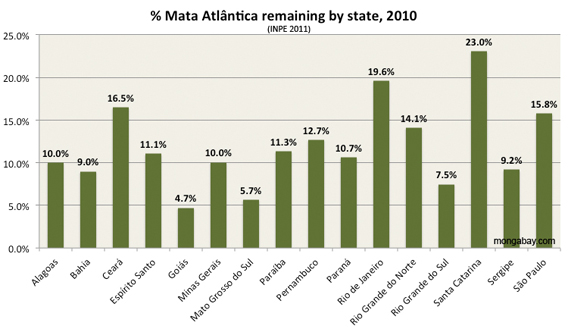 (06/17/2010) Brazil has designated an additional 65,070 hectare (161,000 acres) of land to be protected in the Mata Atlantica, or Atlantic Forest. The land is split between four new protected areas and an expansion of a national park.

(03/29/2010) Brazil’s golden-headed lion tamarin is a small primate with a black body and a bright mane of gold and orange. Listed as Endangered by the IUCN Red List, the golden-headed lion tamarin (Leontopithecus chrysomelas) survives in only a single protected reserve in the largely degraded Atlantic Forest in Brazil. Otherwise its habitat lies in unprotected patches and fragments threatened by urbanization and agricultural expansion. Currently, a natural gas pipeline is being built through prime tamarin habitat.

(05/31/2009) More than 100,000 hectares of Brazil’s most threatened ecosystem was cleared between 2005 and 2008, reports a study by the Fundação SOS Mata Atlãntica and the National Institute for Space Research (INPE). The “Atlas of Mata Atlântica Remnants”, released May 26, assessed the extent of the Mata Atlântica (Atlantic Forest) across 10 of the 17 states where the coastal rainforest occurs. It found that an 102,938 hectares were destroyed during the three year period. The annual loss of 34,121 hectares per year was 2.4 percent lower than the 34,965 ha recorded from the 2000-2005 period.