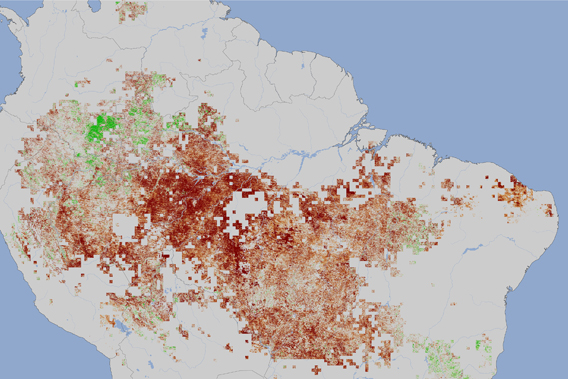 From NASA: image from the Moderate Resolution Imaging Spectroradiometer (MODIS) on NASA’s Terra satellite, the image shows vegetation ‘greenness’ during the 2010 drought, between July and September, compared to average conditions for the same period between 2000 and 2009 (except for 2005, the other drought year). The redder the image the less ‘green’ the forest. The “greenness index” measures how much photosynthesis could be happening based on how much leafy vegetation the satellite sees. In 2010, the vegetation index recorded lower values than in previous years, an indication that trees under drought stress either produced fewer leaves or the chlorophyll content of leaves was lower, or both. Image courtesy of NASA.
Click to enlarge.

NASA has revealed a satellite image of the crippling effect of last year’s record-breaking drought on the Amazon ecosystem. For those of you counting, that’s two record droughts in the Amazon Basin in 5 years.

Scientists are concerned that increasing droughts could turn the Amazon rainforest from a vast carbon sink into a carbon source, emitting excessive carbon due to increased wood rot during drought conditions.

The Intergovernmental Panel on Climate Change’s (IPCC) has argued, and top tropical scientists have concurred, that climate change in combination with deforestation and fire could ‘flip’ around 40% of the Amazon from tropical rainforest to savannah. 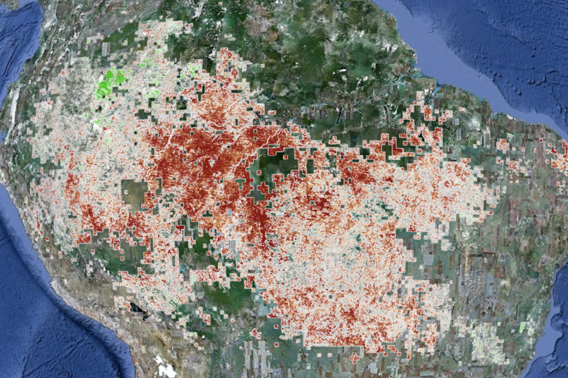 2010 Amazon drought as seen through Google Earth. For more detail see above. Image courtesy of NASA. Click to enlarge.