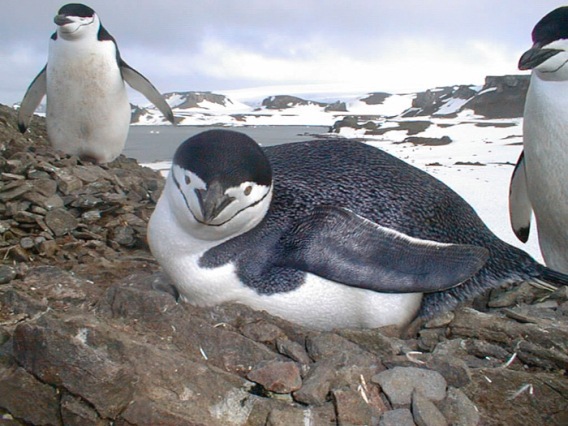 Climate change has hit species of Antarctic penguins by causing a staggering decline in their prey: krill. A new study in the Proceedings of the National Academy of Sciences (PNAS) has found that both chinstrap penguins (Pygoscelis antarcticus) and Adélie penguins (Pygoscelis adeliae) have seen their populations decline likely do to less krill, instead of habitat changes. Since 1970 krill populations have fallen by 80% in the Southern Ocean surrounding Antarctica. Because krill require sea ice to reproduce, shrinking sea ice from climate change has made it more difficult for them to breed.

“As warming continues, the loss of krill will have a profound effect throughout the Antarctic ecosystem,” says Dr. Wayne Trivelpiece, lead author of the paper with NOAA’s Antarctic Ecosystem Research Division, in a press release.

The study overturns conventional wisdom about how chinstrap penguins would fare in a warmer world. Chinstrap penguins select habitat without sea ice, allowing researchers to predict that this species may actually benefit from a warmer Antarctica. But the new study proves that the decline in krill has stolen any advantage chinstrap penguins might have seen in a changing Antarctic. Over the past 10 years chinstrap penguin populations have fallen by 4.3% annually.

“For penguins and other species, krill is the linchpin in the food web. Regardless of their environmental preferences, we see a connection between climate change and penguin populations through the loss of habitat for their main food source,” explains Trivelpiece.

Adélie penguins are faring little better than their chinstrap cousins: these penguins have fallen by 2.9% annually over the last decade. Researchers say Adélie penguins are probably in less danger than chinstrap because they have breeding populations outside of Western Antarctica, although unlike chinstrap penguins they depend on habitats with sea ice.

According to the study, fledgling penguins in both species have been feeling the pinch in krill availability. Fewer young penguins are surviving to adulthood and subsequently some penguin colonies have fallen by half.

“Penguins are excellent indicators of changes to the biological and environmental health of the broader ecosystem because they are easily accessible while breeding on land, yet they depend entirely on food resources from the sea. In addition, unlike many other krill-eating top predators in the Antarctic, such as whales and fur seals, they were not hunted by humans,” explains Trivelpiece. “When we see steep declines in populations, as we have been documenting with both chinstrap and Adélie penguins, we know there’s a much larger ecological problem.”

The problem may only become bigger as ongoing krill fisheries in the Southern Ocean may expand. The caught krill is mostly used in feeding aquaculture or as bait-fish.

Both chinstrap and Adélie penguins are currently listed as Least Concern by the IUCN Red List, however with this new information that status may change. Penguins worldwide are facing a crisis: 60% of the world’s penguins are currently threatened with extinction, and this does not include chinstrap or Adélie. Penguin-expert Dr. David G. Ainley recently told mongabay.com that the biggest cause of global penguin declines is the competition with humans for food.

“The main threat [to penguins] is depletion of fish by industrial fishing […] Penguins need lots of food, nearby, reliably available. It’s easy for fishing to negatively alter this.”