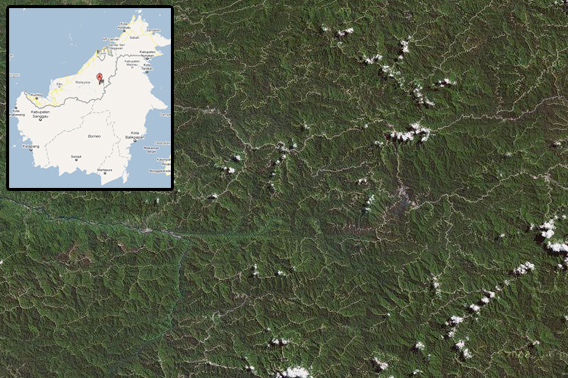 Logging roads in the rainforest of Sarawak. Image courtesy of Google Earth

Embattled Chief Minister of Sarawak Pehin Sri Abdul Taib Mahmud challenged independent observers to demonstrate that anything less than 70 percent of the Malaysian state’s forest cover is “intact” rain forest, according to an interview with Sarawak Reports, a pro-Taib web site created earlier this month.

Taib, who is caught up in a corruption scandal after 30 years of rule, was recently criticized by British former Prime Minister Gordon Brown, who described the deforestation of Sarawak as “probably the biggest environmental crime of our times”. Brown’s sister-in-law, Clare Rewcastle Brown, has led a campaign against Taib, whom she calls “one of the worst environmental criminals on the planet.”

In the interview Taib refuted claims that 90 percent of Sarawak’s primary forests have been impacted by logging.

“People can make many claims, but my government has been very deeply committed to sustainable management of our forest,” he said, claiming that 70 percent of Sarawak’s forest was “intact”, while 14 percent has been replanted or is undergoing conversion to plantations.

“These are the simple facts and if people want to verify, they are welcome to Sarawak. I’ll be open for… independent inspection and I have nothing to hide.”

Critics, led by Clare Rewcastle Brown’s Sarawak Report (not related to Taib’s Sarawak Reports) and Free Sarawak Radio, say that Taib, his family, and associates have earned billions in unreported income from logging and plantation development in Sarawak over the past three decades. The anti-Taib campaign has linked the Chief Minister to overseas properties worth hundreds of millions of dollars in the United States, Canada, and Australia.

Environmental and indigenous rights group assert that Sarawak’s forests have been heavy logged since Taib came to power. Last year, a massive logjam on the Rajang river, Malaysia’s longest river, proved an embarrassment for Sarawak’s logging industry. The government of Sarawak has since announced plans to covert more than one million hectares of forest, the majority of which is classified as native customary rights’ land, or belonging to indigenous communities, to oil palm plantations.