The Democratic Republic of Congo (DRC) has suspended oil exploration in Africa’s oldest national park, Virunga, until a Strategic Environmental Assessment (SEA) is conducted. The move ends oil companies, Soco and Dominion’s plans to explore for oil in blocs within the park that were awarded to the companies last year.

“We have rejected the recommendations of an environmental impact assessment conducted by the oil company, Soco, which we consider premature, superficial and which does not conform to the standards which we would expect,” said José E.B. Endundo, the Minister for the Environment, Nature Conservation and Tourism.

The companies have said they will respect the government’s decision and await the results of the SEA.

Home to a quarter of the world’s mountain gorillas, as well as chimpanzees, hippos, lions, forest elephants, okapi, and rare birds Virunga National Park is one of Africa’s most biodiverse parks and is classified by the UN as a World Heritage Site.

The UN along with several conservation organizations have criticized the plan to allowing oil exploration in the park. The oil companies, though, have contended they could improve the park’s security situation, which is unstable due to the presence of armed rebels hiding in the vast park. Over 130 rangers have died in the book due to conflict with rebels in the past 15 years. 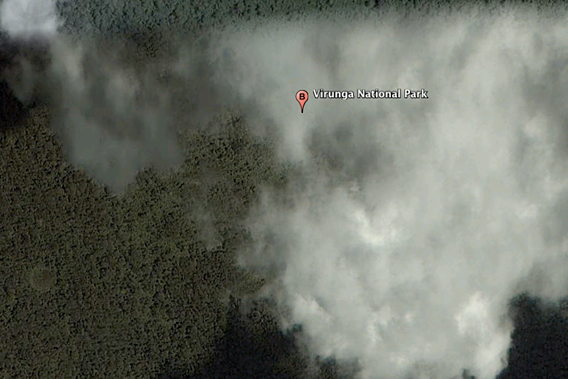 A portion of Virunga National Park swaddled in clouds as seen by Google Earth.

(03/17/2011) One of the major tenets behind the creation of a national park, or other protected area, is that it will not fade, but remain in essence beyond the pressures of human society, enjoyed by current generations while being preserved for future ones. The protected area is a gift, in a way, handed from one wise generation to the next. However, in the real world, dominated by short-term thinking, government protected areas are not ‘inalienable’, as Abraham Lincoln dubbed one of the first; but face being shrunk, losing legal protection, or in some cases abolished altogether. A first of its kind study, published in Conservation Letters, recorded 89 instances in 27 countries of protected areas being downsized (shrunk), downgraded (decrease in legal protections), and degazetted (abolished) since 1900. Referred to by the authors as PADDD (protected areas downgraded, downsized, or degazetted), despite its large impact on conservation efforts the trend has been little studied.

(01/20/2011) WWF, the International Union for the Conservation of Nature (IUCN), and the UN have all recently expressed concerns about two oil companies’ plan to explore for oil in Africa’s oldest and famed Virunga National Park. Home to a quarter of the world’s mountain gorillas, as well as chimpanzees, hippos, lions, forest elephants, and rare birds Virunga National Park in the Democratic Republic of Congo (DRC) is one of Africa’s most biodiverse parks and is classified by the UN as a World Heritage Site. But according to WWF plans by oil companies SOCO International and Dominion Petroleum could jeopardize not only the wildlife and ecosystems, but also local people.