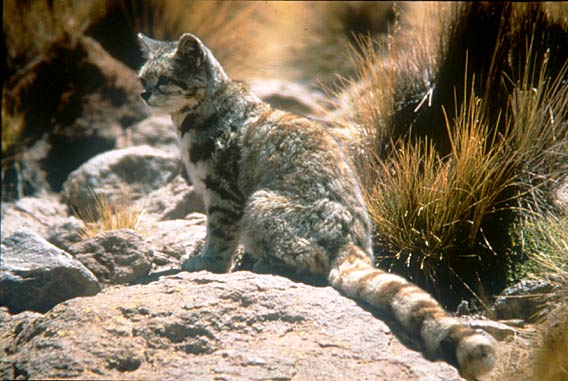 The elusive Andean cat (Leopardus jacobita), which until the late 1990s was only known to scientists by a couple photographs, has been discovered beyond the Andes mountain range for which it is named. According to researchers, the wild Andean cat resembles Asia’s snow leopard, both in appearance and its habitat above altitudes of 3,000 meters (9,800 feet), only in this case the wild cat is about the size of a domesticated feline. But, scientists have now discovered that the cat, which is listed as Endangered by the IUCN Red List, also inhabits the Patagonian steppe at elevations as low as 650 meters (2,100 feet).

“These confirmed records show the lowest elevations ever reported for the Andean cat,” said Wildlife Conservation Society (WCS) conservationist Andres Novaro, lead author of the study appearing in CATNews. “According to genetic studies underway led by Daniel Cossios, this new population appears to represent an evolutionary lineage distinct from the highland population.”

Andean cat presence was confirmed by conducting interviews, collecting scat, and analyzing the skins of cats killed by locals. Researchers now believe the Andean cats’ habitat follows that of its prey, the mountain vizcacha (Lagidium viscacia), a rodent that looks like a rabbit, but is related to the chinchilla.

Surprisingly, the Patagonia steppe is actually home to four wild cat species: Geoffroy’s cat (Leopardus geoffroyi), pampas cat (Leopardus pajeros), the jaguarundi (Puma yagouaroundi), and the Andean cat, which is the most endangered.

“Discovering a new population of Andean cats is an important finding for this elusive and rare species,” said Mariana Varese, acting director of WCS’s Latin America and Caribbean Program. “Determining the range of the Andean cat in the Patagonian steppe will provide conservationists with a foundation for later conservation plans.”

The Andean cat faces a number of threats including killing by locals both for the belief that is has supernatural powers and that it is a danger to livestock; industrial activities such as oil drilling; new road-building; locals eating mountain vizcacha; and climate change melting the glaciers on which the ecosystem depends.

There are around 36 species of wild cat in the world. More than half, 22 species, of these are dubbed ‘small cats’ and remain little known by the public and little aided by much of the conservation community.

For more information on the Andean cat and efforts to save it: Small Cat Conservation Alliance.

(09/28/2008) One of the world’s rarest cats is also one of its least known. The Andean mountain cat, sometimes called the “snow leopard” of the Andes, is an elusive species found only at high elevations of the Andean region in Argentina, Bolivia, Chile and Peru. Little is known about its ecology and behavior. While the species is known to be rare, no one knows how many individuals survive in the wild. Mauro Lucherini and his colleagues at the Andean Cat Alliance(AGA) are working to change this.

(02/14/2011) The Jeypore-Dehing lowland rainforest in Assam, India is home to a record seven wild cat species, more than any other ecosystem on Earth. While it took wildlife biologist Kashmira Kakati two years of camera-trapping to document the seven felines, the announcement put this forest on the map—and may very well save it. A year after the record was announced, officials are promising to pursue permanent preservation status for the forest, which is threatened by logging, poaching, oil and coal industries, and big hydroelectric projects.

(01/23/2011) Just six years ago the beautiful medium-sized Asian cat, the clouded leopard, was considered a single species. Then in 2006 researchers announced that there were, in fact, two unique species of clouded leopard: one species (Neofelis nebulosa) that inhabited mainland Asia (from Nepal to China and south to peninsular Malaysia) and a more threatened species living on the islands of Borneo and of Sumatra, dubbed the Sunda clouded leopard (Neofelis diardi). Now, researchers have confirmed that clouded leopards living on Sumatra are distinct from those on Borneo, further subdividing these two populations into unique subspecies.

(11/05/2009) Rare, elusive, and endangered by habitat loss, the bay cat is one of the world’s least studied wild cats. Several specimens of the cat were collected in the 19th and 20th Century, but a living cat wasn’t even photographed until 1998. Now, researchers in Sabah, Malaysian Borneo, have managed to capture the first film of the bay cat (Catopuma badia). Lasting seven seconds, the video shows the distinctly reddish-brown cat in its habitat.

(10/28/2008) Two years ago a mysterious wild cat was spotted in Peru. The cat was photographed recently by Aldo Sornoza of Fundacion Jocotoco (FJ) in Ecuador's Jorupe Reserve, close to the Peruvian border.