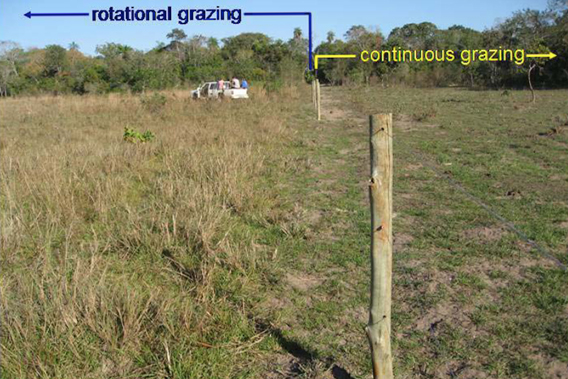 The Pantanal spanning Brazil, Bolivia, and Paraguay is the world’s largest wetland—the size of Florida—and home to a wide-variety of charismatic species, such as jaguars, capybaras, and giant anteaters. However, the great wetland is threatened by expansion in big agriculture and an increasingly intensive cattle industry. Yet there is hope: a new study by Wildlife Conservation Society of Brazil (WCS-Brazil) researchers has found that cattle and the ecosystem can exist harmoniously. By replacing current practices with rotational grazing, cattle ranchers gain a healthier herd and more profits while safeguarding the ecological integrity and wildlife of the world’s largest wetland system. The study published in mongabay.com’s open access journal Tropical Conservation Science is a rare instance of a win-win situation.

While the Pantanal has seen sustainable cattle grazing for some 200 years, recent practices including planting of non-native grasses, deforestation, burning, and higher density of cows has upset the equilibrium, threatening species and imperiling the wetland’s many ecosystem services. While these practices may bring short-term economic gain, they actually hurt the cattle industry overall by eroding soils, threatening water supplies, raising risk of disease, and undercutting nutrition for the cattle.

“To prevent further deforestation and protect the extraordinary biodiversity of the Pantanal and [adjacent grasslands] the cerrado, the areas already developed for farming and ranching need to be managed more efficiently and profitably, so that economic incentives for additional deforestation are minimized,” write the authors.

The WCS researchers tested rotational grazing, which has rarely been used in the Pantanal, as opposed to the standard of continuous grazing.

“In a rotational grazing system, livestock are moved frequently among small pasture enclosures […] Exclusion of the cattle from enclosures between grazing periods promotes pasture recuperation,” the authors explain.

Studying rotational grazing for over a year and a half, researchers found that cattle weights were 15% greater than in continuous grazing, and pregancy rates were nearly a quarter higher. Greater forage for cattle in the rotational system allowed researchers to estimate that cattle density could be increased by 2 to 6 times.

“Based on beef cattle and calf prices for the Pantanal in May 2009, the potential economic gain from the heavier cows and additional calves in the rotational system was approximately $68 (R$136 reais) per adult animal,” the researchers write.

The system benefits conservation, as well, in a region that is largely under private ownership. Ranchers using rotational grazing would have less reason to burn native grasses and plant non-native species. In addition, the system frees up more land for the Pantanal’s forests and wetlands, preserving important watersheds and mitigating erosion.

The Pantanal is home to a number of globally endangered species, including: jaguars (Panthera onca) and white-lipped peccary (Tayassu pecari) listed as Near Threatened by the IUCN Red List; marsh deer (Blastocerus dichotomus) and giant anteater (Myrmecophaga tridactyla) as Vulnerable; and hyacinth macaws (Anodorhynchus hyacinthinus) and giant otters (Pteronura brasiliensis) as Endangered.

(01/10/2006) Deforestation has destroyed 17 percent of the Pantanal, the world’s largest wetland, according to a new report from conservation International. The Pantanal, an area of flooded grassland and savanna covering 200,000 square kilometers during the rainy season, includes parts of Brazil, Paraguay, and Bolivia and is fed by the Rio Paraguay. The wetland is home to some 3500 species of plant and 650 species of birds. About 125 types of mammals, 180 kinds of reptiles, 41 types of amphibians, and 325 species of fish have been found in the region. The Pantanal in an important source of freshwater to neighboring farming areas and downstream urban areas.

Brazil may ban sugarcane plantations from the Amazon, Pantanal

(09/18/2009) Brazil will restrict sugarcane plantations for ethanol production from the Amazon, the Pantanal, and other ecologically-sensitive areas under a plan announced Thursday by President Luiz Inacio Lula da Silva’s administration, reports the Associated Press.

(03/13/2008) In a bizarre biological twist, a new study shows that the Hyacinth Macaw depends on its greatest predator, the Toco Toucan, for continued survival.