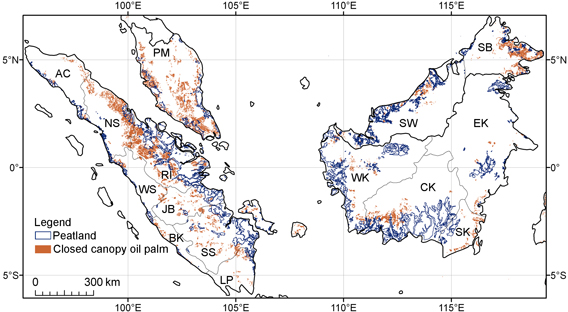 Distribution of closed canopy oil palm plantations and tropical peatlands in the lowlands of Peninsular Malaysia, Borneo and Sumatra. Click image to enlarge.

The research, published in the journal, Proceedings of the National Academy of Sciences (PNAS), finds that closed canopy oil palm plantations covered 8.3 million ha in 2010, including 2 million ha in Peninsular Malaysia, 2.4 million ha in Borneo, and 3.9 million ha in Sumatra. The analysis is conservative: it only accounts for mature plantations—those established in 2002 or earlier—that are over 200 ha. But while the map excludes smaller and/or immature plantations (thought to cover at least another 3 million ha in Malaysia and Indonesia), the work represents an important development in determining the extent of oil palm expansion in Southeast Asia.

“Conservationists have been asking for a satellite-based map of oil palm for a long time,” Lian Pin Koh, lead author and an ecologist at ETH Zürich, told mongabay.com. “Now that we have developed this semi-autonomous method for identifying mature oil palm from satellite images, researchers and environmental groups can use it to detect oil palm expansion. More importantly it can be used to monitor any encroachment of oil palm onto tropical rainforests.”

“The same tool can be used in other regions, such as Africa or Latin America, experiencing oil palm development.”

Importantly, the tool can be used to extrapolate the environmental impact of oil palm expansion. The authors did just this with two areas that are of major concern to environmentalists: biodiversity and carbon emissions.

Koh and colleagues applied a species-area model to the map to estimate biodiversity loss from land use change.

“Conversion of peatswamp forests to oil palm led to biodiversity declines of 1% in Borneo (equivalent to four species of forest-dwelling birds), 3.4% in Sumatra (16 species), and 12.1% in Peninsular Malaysia (46 species),” they write. Birds were used as a proxy for biodiversity loss.

Comparing the map with known peat forests, they found that at least 880,000 hectares of carbon-dense swamps had been converted to plantations by the early 2000s, contributing to the loss of more than 140 million metric tons of above-ground carbon stocks and resulting in annual carbon emissions of at least 4.6 million tons from peat oxidation.

“Our estimates of carbon emissions were based on a very recent review (PNAS 107:19655) of the carbon balance between intact peatswamp forests and oil-palm plantations in Southeast Asia, which takes account of aboveground biomass carbon, belowground peat oxidation, as well as forfeited carbon sequestration services due to lost forests,” Koh told mongabay.com via email. “Therefore we used the latest estimates of these emissions variables that are also specific to our study region.”

According to the study, some 2.3 million ha of peatswamp forests have been cleared, but not yet converted for oil palm agriculture or other land use. These include 450,000 ha in Riau Province (Sumatra), 400,000 ha in Central Kalimantan (Indonesian Borneo), 320,000 ha in South Sumatra (Sumatra), and 290,000 ha in Sarawak (Malaysian Borneo).

Restoration of these lands could boost local biodiversity but conversion to oil palm would exacerbate greenhouse gas emissions. Thus Koh and colleagues conclude with a call to prioritize conservation and reforestation efforts in regions that retain the bulk of remaining peatswamp forests in Southeast Asia: Central Kalimantan, Riau, and West Kalimantan. These three Indonesian provinces account for nearly three quarters of remaining peatswamp forests in Peninsular Malaysia, Borneo, and Sumatra.

Turning to the matrix: a more accurate way to predict extinction

(04/14/2010) According to most conservationists the globe is striding into the midst of the Sixth Mass Extinction. Species populations worldwide are dropping and in many cases species are vanishing all together due to pollution, climate change, poaching and hunting, overconsumption, invasive species, and exotic diseases, but no threat proves more pervasive and devastating for the world’s species than habitat loss.