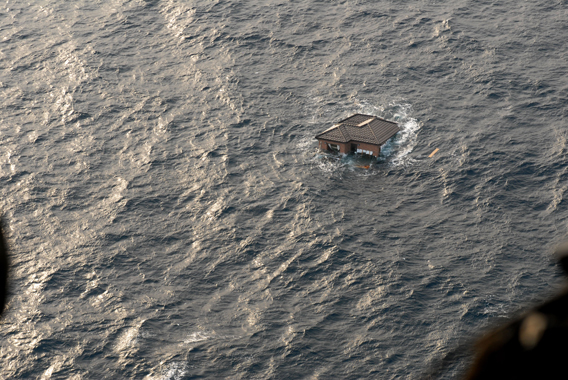 A Japanese home is seen adrift in the Pacific Ocean. Ships and aircraft from the Ronald Reagan Carrier Strike Group are searching for survivors in the coastal waters near Sendai, Japan. (U.S. Navy photo by Mass Communication Specialist 3rd Class Dylan McCord/Released)

Analysis of global positioning system data at the Geospatial Information Authority in Tsukuba found the 9.0-magnitude quake moved the peninsula 5.3 meters (17 feet) and dropped it by 1.2 meters (3.9 ft). The displacement was the largest on record for Japan, according to the agency.

The quake also shifted other points of Japan, including Tokyo, although the movements were smaller.

The earthquake triggered a devastating tsunami that killed thousands along the eastern coast of Japan. The tsunami also crippled the Fukushima Daiichi nuclear power plant.

Pictures of tsunami devastation, including a house floating in the open ocean

(03/17/2011) The U.S. Navy released shocking pictures showing widespread devastation in Japan following last week’s 9.0-magnitude earthquake and accompanying tsunami. The photos include a house floating in the open ocean, scenes of destruction in Ofunato, and piles of vehicles and debris, among others.

(03/11/2011) Could the earthquake that triggered Japan’s devastating tsunami be linked to climate change? The short answer is probably not, but recent research suggests that changing climate has the potential to influence earthquakes in some parts of the world