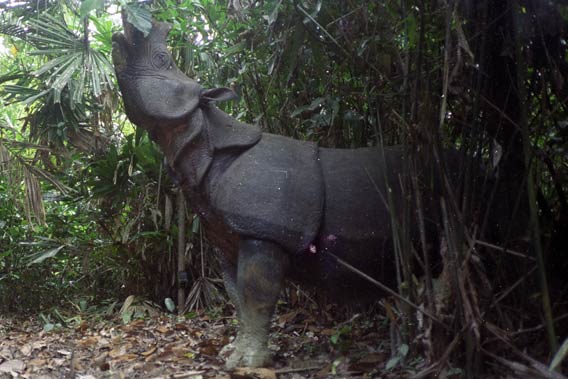 A Javan rhino (Rhinoceros sondaicus) captured on a camera trap browses for food. Javan rhinos are herbivores and eat around 110 lbs of food daily. Photo courtesy of WWF.

There may only be 40 left in the world, but intimate footage of Javan rhino mothers and calves have been captured by video-camera trap in Ujung Kulon National Park, the last stand of one of the world’s most threatened mammals. Captured by World Wildlife Fund (WWF) and Indonesia’s Park Authority, the videos prove the Javan rhinos are, in fact, breeding.

“The videos are great news for Javan rhinos,” said Dr. Eric Dinerstein chief scientist at WWF, adding that “there are no Javan rhinos in captivity—if we lose the population in the wild, we’ve lost them all.”

Given the situation, a single disease or natural disaster—such as a volcano explosion according to Dinerstein—could push the species to extinction. To ensure the species has a chance to survive, WWF is working on implementing a program to translocate a few of the rhinos in order to establish a second population.

The two videos filmed in November and December 2010 show two different rhino mothers, one with a young male calf and that another with a year-old female calf.

“It’s such a joy to see these healthy calves calmly ambling through the dense tropical forest,” Barry Long with WWF said. “It gives me hope for the future of the species and it’s moments like these that make all of the hard work of Indonesia’s dedicated field staff worthwhile.”

Although dubbed the Javan rhino, the species was once widespread through Southeast Asia. But demand for powdered rhino horn for traditional Chinese medicine decimated the species, along with the world’s other four rhino species, although there is no evidence that rhino horn has any curative properties. In addition habitat loss has pushed surviving rhino populations into smaller and smaller pockets. Not long ago, there was a small population of Javan rhinos still surviving in Vietnam, however many conservationists believe this population—if any rhinos still exist—is no longer viable. One of the last Vietnamese individuals was found last year killed by poachers with its horn sawed off.

Three of the world’s five rhino species, including the Javan, are listed as Critically Endangered. 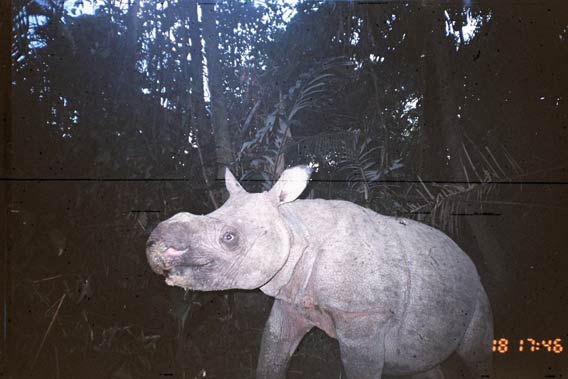 A baby Javan rhino captured on a camera trap in Ujung Kulon National Park. Mature female Javan rhinos breed only once every four or five years. Photo courtesy of WWF. 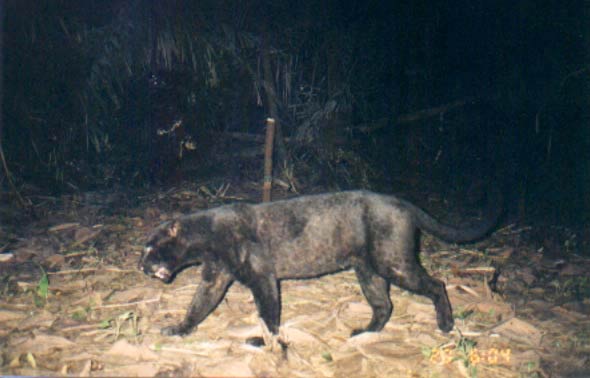 A melanistic (or black) leopard passes in front of a camera trap in Ujung Kulon National Park. Spotted and melanistic leopards are both found in the park. Photo courtesy of WWF. 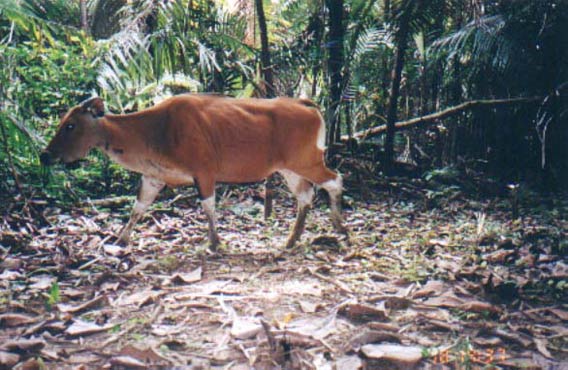 The Javan rhino share Ujung Kulon National Park with a globally significant population of Endangered banteng; a wild cattle and ancestor of domestic cows in the region.
Photo courtesy of WWF. 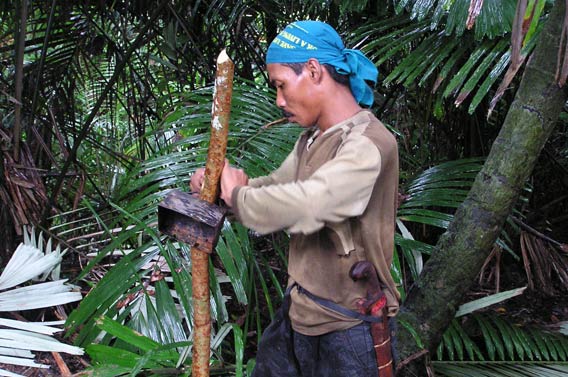 The protective case for a camera trap is secured to a pole in Ujung Kulon National Park, Indonesia. Photo courtesy of WWF.

(01/19/2011) Three hundred and thirty-three rhinos were killed in South Africa last year, the highest number yet. Ten of the rhino were black rhinos, which are listed as Critically Endangered by the IUCN Red List, the rest were white rhinos, listed as Near Threatened. In total South Africa has over 20,000 rhinos.

Reforestation effort launched in Borneo with nearly-extinct rhinos in mind

(11/18/2010) The Rhino and Forest Fund (RFF) has partnered with the Forestry Department of Sabah in northern Borneo to launch a long-term reforestation project to aid Malaysia’s threatened species with particular emphasis on the Bornean rhino (Dicerorhinus sumatrensis harrissoni), one of the world’s most imperiled big mammals. The reforestation project will be occurring in and adjacent to Tabin Wildlife Reserve, which is surrounded on all sides by oil palm plantations.