A photo of an illegally killed great pied hornbill (Buceros bicornis) by what appears to be Malaysian soldiers has angered environmentalists in Malaysia, according to the New Strait Times. The photo was posted on Facebook last year.

The Facebook profile that posted the photo commented in Bahasa that the bird was ‘tasty’. Great pied hornbills, however, are protected by Malaysia’s Wildlife Protection Act, and a number of conservation groups have asked that officials look into the incident.

“It goes against the society’s conservation stance. It also sends a wrong message, especially to the younger generation, with regard to treating wildlife,” Andrew Sebastian, the head of the Malaysian Nature Society, told the New Strait Times.

TRAFFIC, a group countering the illegal trade in wildlife, has lodged a police report over the photo.

Hornbills play a major ecological role throughout Asia as they disperse a wide variety of seeds. The great pied hornbill is listed as Near Threatened by the IUCN Red List and is believed to be declining throughout its range largely due to habitat loss and hunting. 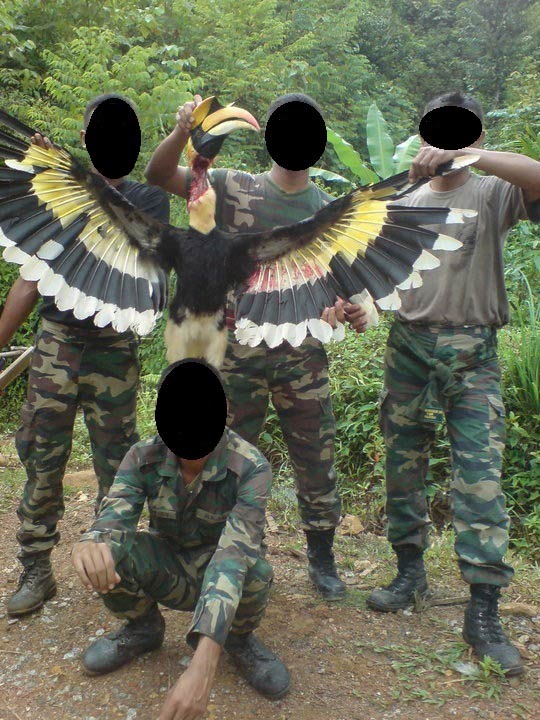 How hornbills keep Asian rainforests healthy and diverse, an interview with Shumpei Kitamura

(04/26/2010) Hornbills are one of Asia’s most attractive birds. Large, colorful, and easier to spot than most other birds, hornbills have become iconic animals in the tropical forests of Asia. Yet, most people probably don’t realize just how important hornbills are to the tropical forests they inhabit: as fruit-eaters, hornbills play a key role in dispersing the seeds of tropical trees, thereby keeping forests healthy and diverse. Yet, according to tropical ecologist and hornbill-expert Shumpei Kitamura, these beautiful forest engineers are threatened by everything from forest loss to hunting to the pet trade.

Long-distance seed dispersal and hunting, an interview with Kimberly Holbrook

(05/24/2010) Scientists are just beginning to uncover the complex relationship between healthy biodiverse tropical forests and seed dispersers—species that spread seeds from a parent tree to other parts of the forest including birds, rodents, primates, and even elephants. By its very nature this relationship consists of an incredibly high number of variables: how abundant are seed dispersers, which animals spread seeds the furthest, what species spread which seeds, how are human impacts like hunting and deforestation impacting successful dispersal, as well as many others. Dr. Kimberly Holbrook has begun to answer some of these questions.