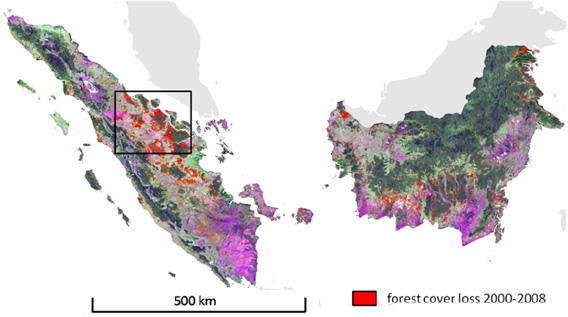 Forest cover loss for Sumatera and Kalimantan mapped at moderate spatial resolution for the 2000–2008 interval superimposed on a Landsat image composite (bands 5/7/4 as R/G/B). Image and caption courtesy of Broich 2011

Kalimantan and Sumatra lost 5.4 million hectares, or 9.2 percent, of their forest cover between 2000/2001 and 2007/2008, reveals a new satellite-based assessment of Indonesian forest cover.

The research, led by Mark Broich of South Dakota State University, found that more than 20 percent of forest clearing occurred in areas where conversion was either restricted or prohibited, indicating that during the period, the Indonesian government failed to enforce its forestry laws.

“Our analysis showed that the majority of all mapped forest cover loss (79.9%) occurred in land allocation zones that permit permanent or temporary clearing, while 20.1% occurred where clearing is either prohibited or restricted,” the authors write. Under Indonesian law, clearing of conservation forest, protection forest, and limited production forest is illegal. 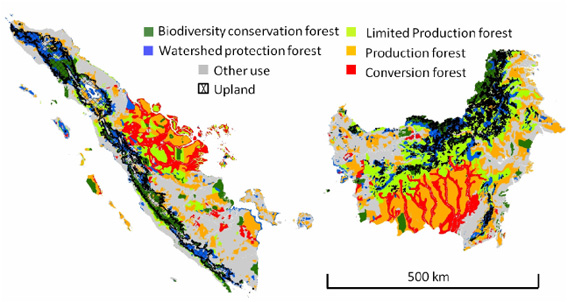 Land allocation zones (Ministry of Forestry Indonesia 2008) and upland areas for Sumatera and Kalimantan. Image and caption courtesy of Broich 2011.

Forest loss was higher in Sumatra, which saw large areas of forest converted for pulp and paper plantations and oil palm estates. Both Sumatra and Kalimantan suffered from large-scale fires set for land-clearing purposes.

Overall, deforestation peaked in 2006, when forest loss topped 900,000 hectares. Riau and Central Kalimantan provinces accounted for nearly half of the total forest cover loss, according to the analysis. 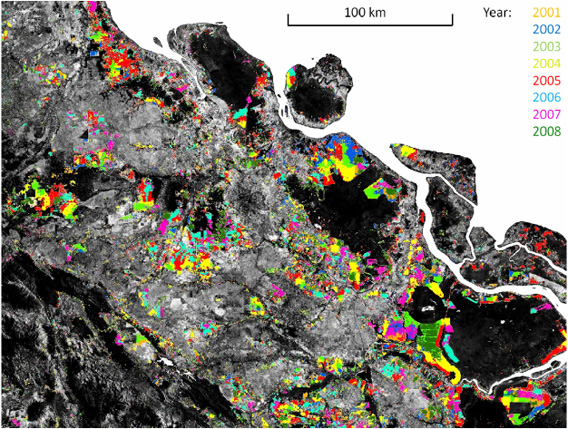 Temporal disaggregation of the moderate spatial resolution forest cover loss map for Riau province, Sumatera. Landsat band 5 is displayed in grayscale with dark tones representing forest cover. Colors mark the year of MODIS-detected forest cover loss. This map is a magnification of the box in the top-most image. Image and caption courtesy of Broich 2011.

The figures suggest that deforestation in Indonesia is worse than thought by the U.N. Food and Agriculture Organization (FAO), which estimated the country lost an average of 485,000 hectares of natural forest per year between 2000 and 2010. Broich’s research puts average annual forest loss at 675,000 hectares per year in just Kalimantan and Sumatra between 2000/2001 and 2007/2008. 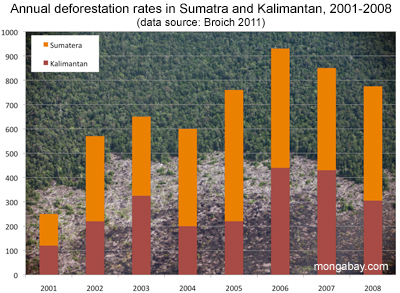 The research comes shortly after an investigation by a task force set up by President Susilo Bambang Yudhoyono found that deforestation in Central Kalimantan costs the province 158.5 trillion rupiah ($17.6 billion). A separate analysis published this week by Indonesian Corruption Watch estimated state losses from deforestation country-wide at 71 trillion Rupiah ($8 billion) between 2005 and 2009, or roughly $1.6 billion per year.

But Indonesia has lately signaled an interest in slowing deforestation. In 2009, President Yudhoyono announced Indonesia would cut greenhouse gas emissions by 26-41 percent from a projected 2020 baseline, provided it receive international assistance. The country has since signed a ‘REDD+’ (Reducing Emissions from Deforestation and Degradation) partnership with Norway that would generate up to $1 billion if Indonesia meets deforestation reduction targets.

More than 85 percent of Indonesia’s emissions result from land use according to the country’s National Climate Change Council (DNPI).