The spiky, odorous, weighty, and almost impenetrable durian fruit is considered by some to be a fine delicacy, but others a putrid horror. Its taste has been described between a delicious custard and old gym socks. Still, even durian lovers may be uncomfortable with the idea of eating the fruit after it has been consumed and expelled by a wild Asian elephant. But according to the New Straits Times recently wealthy businessmen are willing to pay over $300 for a sample of elephant-ingested durian, which they believe acts as an aphrodisiac.

“The fruit remains clean as no dirt or bacteria can penetrate the hard and fibrous husk within the short time span. Tycoons claim that the fruit will become an aphrodisiac after passing through the elephant’s digestive tract. Although there is no scientific evidence to suggest so, the high demand and good price for the fruit speak for itself,” Vincent Chow with the Malaysia Nature Society told the New Straits Times.

In order to obtain the elephant-digested durians, members of the Malaysian indigenous group Orang Asli follow a wild elephant, often for hours, after it is observed swallowing durians. Once the elephant passes the fruit, the Orang Asli gather it and sell it for a price that can reach 100 times the price of a regular durian.

In order to find durians, elephants follow its infamous odor. While a variety of species find the durian appetizing, including both tigers and orangutans, only those digested and expelled by an elephant is sought after.

Elephant ingested durian isn’t the only costly fecal delicacy in Asia. On the Indonesian island of Sumatra, coffee beans that have been eaten and expelled whole by civets are sold as the world’s most expensive coffee. 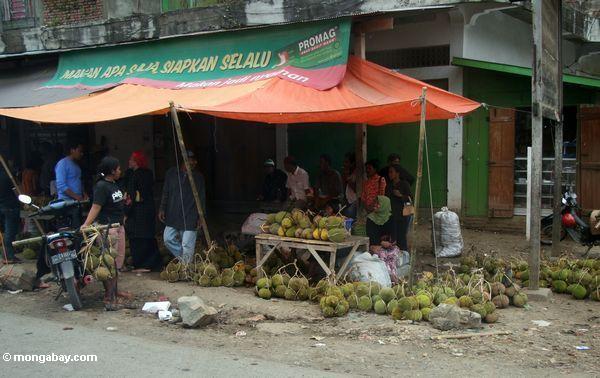 Durians for sale on the Indonesian island of Sulawesi. Photo by: Rhett A. Butler.

(12/19/2010) One would think that it would be easy to track Asia’s largest land animal, but in fact Asian elephants (Elephas maximus) are generally shy, mostly nocturnal, and stick to the forest whenever possible. Yet, it’s vital for conservationists to track the herd, if they are to keep them safe from poaching and protect both elephants and locals from potential conflict. However, a new study in mongabay.com’s open access journal Tropical Conservation Science has developed a unique strategy to track elephant herds in Sri Lanka by sticking to the water.

(11/30/2010) Local conservationists are urging the Indonesian government to halt the destruction of a 42,000 hectare forest in the renowned Bukit Tigapuluh Forest Landscape for a pulpwood plantation. According to researchers, the forest concession—owned by PT Lestari Asri Jaya, a subsidiary of Barito Pacific Group—contains the last population of Sumatran elephants (Elephas maximus sumatranus) in the Bukit Tigapuluh and approximately 5% of the island’s total population. In a letter being sent to the Ministry of Forests, conservationists write that the destruction of the forest “would immediately lead to local extinction of elephants in Bukit Tigapuluh”. They argue that given its ecological importance, the PT Lestari Asri Jaya forest concession should be placed under permanent protection.