Add financial markets to the long list of threats to wildlife 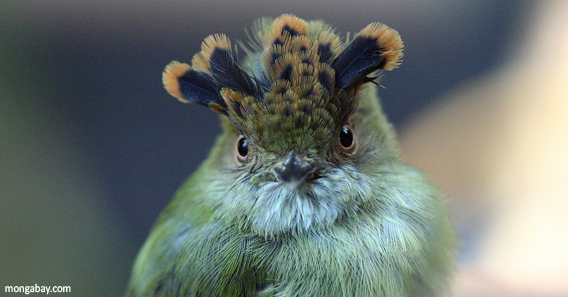 The emergence of a Reducing Emissions from Deforestation and Degradation (REDD) mechanism for protecting forests could introduce new risks for biodiversity by linking conservation finance to exotic financial derivatives, warn researchers writing in the journal Conservation Letters.

Jacob Phelps, Edward L. Webb, and Lian P. Koh argue that REDD could effectively link the fate of some species to the short-term whims of the carbon market. Conservation projects funded primarily by REDD are most at risk of being undermined by declining in carbon prices or changing investor preference. The authors add that the short-term nature of REDD—which is seen as a stop gap measure of at most 30 years—may fail deliver benefits over the time-scale need to safeguard biodiversity.

“Conservation initiatives generally require long-term, stable sources of funding,” they write. “Given the scale of REDD+ projects and financing, and the high expectations in some quarters that REDD+ will reform conservation finance and protect imperiled biodiversity, current and future projects tied to REDD+ financing might be exposed to significant risks.”

Acknowledging and understanding this risk should therefore be a priority for conservation planners, who need to avoid over-leveraging short-term carbon finance and overlooking potential long-term finance.

“It makes sense to capitalize on the opportunities created by REDD+ to enhance biodiversity conservation. Even short-term and less-than-ideally structured funding for conservation is better than no funding at all,” Phelps, Webb, and Koh write. “However, the rapid development of new REDD+ initiatives, many of which are heavily reliant on REDD+ readiness funding from donors, raises questions about whether some projects are overleveraged and overlooking long-term financial resilience.”

“Diversification
might include drawing on market, traditional donor,
and philanthropic contributions. It might also rely on
bundling other ecological services (largely water related)
with carbon for payment as ecosystem services, especially
to raise resources for high-opportunity cost areas. Biodiversity might eventually be similarly
monetized.”

Phelps, Webb, and Koh conclude by emphasizing the need to not let the potential upside of REDD overshadow the potential risks of depending on the mechanism for long-term financial sustenance.

“Given prudent safeguards
and planning, REDD+ will contribute not only to
reducing emissions and ensuring forest conservation, but
also to protecting biodiversity. However, there remains
little certainty that REDD+ funding will fuel long-term
biodiversity conservation. We need to acknowledge the
associated risks in order to better prepare conservationists,
governments, local land-owners, and forest users to
deal with the incoming, but by no means reliable or permanent,
investments in forests.”