King of dinosaurs was a hunter, not a scavenger

Ecologists say they have used a computer model to put to rest a nearly century-old debate. Did Tyrannosaurus Rex, one of the world’s most well-known dinosaurs, hunt down its prey like a lion on the plains, or, instead, did it scavenge meals from other hunters like a vulture? According to scientists with the Zoological Society of London (ZSL) the Tyrannosaurus had only one choice in order to survive: hunt.

Employing an ecological model based on predator relationships in the Serengeti—home to wide-variety of both hunters and scavengers—the scientists conclude that Tyrannosaurus must have been a hunter, because the king of dinosaurs would have failed as a scavenger.

“By understanding the ecological forces at work, we have been able to show that scavenging was not a viable option for T .rex as it was out-competed by smaller, more abundant predatory dinosaurs,” explains lead author Dr Chris Carbone. “These smaller species would have discovered carcasses more quickly, making the most of ‘first-come-first-served’ opportunities.”

The researchers also conclude that the Tyrannosaurus would have hunted over great distances like contemporary predators such as polar bears and lions.

Published in Proceedings of the Royal Society B., the study says that previous arguments for or against the scavenger-theory have focused too much on the Tyrannosaurus’s morphology. Many scavengers and hunters share similar morphology, yet use completely different methods of getting a meal. Still, many paleontologists have argued for a broader view of Tyrannosaurus as both a hunter and a scaveneger, something like the modern-day spotted hyena.

While this study may not put to rest the scavenger-theory, amateur dinosaur-lovers will likely be pleased to think of the seven ton behemoth as stalking, ambushing, and killing its prey again. 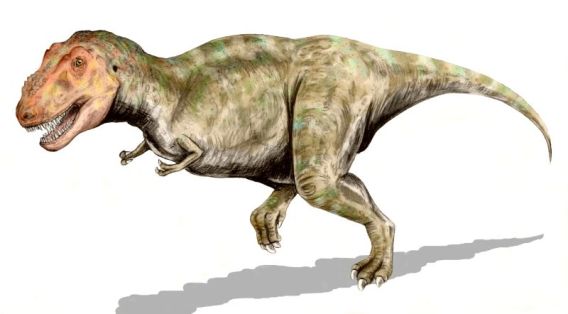 Reconstruction of a Tyrannosaurus rex. Illustration by Nobu Tamura.

(01/25/2011) Paleontologists working in China have discovered a first for dinosaurs: a species with only one finger. Named Linhenykus monodactylus, the extinct species stood only about two feet high and weighed about as much as a large parrot. Although small, the new dinosaur was a member of the carnivorous therapod dinosaurs, which include the infamous Tyrannosaurus Rex. The find was announced in the Proceedings of the National Academy of Sciences.

(01/13/2011) Scientists have announced the discovery of a new species of carnivorous dinosaur which lived 230 million years ago in what is today Argentina.