I have a declarative statement to make: cycads are mind-blowing. You may ask, what is a cycad? And your questions wouldn’t be a silly one. I doubt Animal Planet will ever replace its Shark Week with Cycad Week (perhaps the fact that it’s ‘animal’ planet and not ‘plant’ planet gave that away); nor do I expect school children to run to see a cycad first thing when they arrive at the zoo, rushing past the polar bear and the chimpanzee; nor do I await a new children’s book about a lonely little anthropomorphized cycad just looking for a friend. In the world of species-popularity, the cycad ranks pretty low. For one thing, it’s a plant. For another thing, it doesn’t produce lovely flowers. And for a final fact, it looks so much like a palm tree that most people probably wouldn’t know it wasn’t. Still, I declare the cycad to be mind-blowing.

Here’s why: cycads are ancient plants unrelated to anything on Earth. They are in a way living fossils of a bygone world, not unlike crocodiles. According to the fossil record, the cycads heyday was during the time of the dinosaurs, and, according to Dr. Thomas Marler, an expert on the plants of Guam, these great trees with massive sex organs (i.e. cones) look exactly like what one expects from an era when great beasts roamed antediluvian forests.

“The primitive features of the plant conjure up thoughts of ancient life on Earth. That cycads ruled the plant kingdom during the dinosaur era is a concept that is easy to imagine when admiring the beauty of a contemporary cycad species,” Marler told mongabay.com. As to the point that cycads are palm-like, Marler says it should be the other way around: since cycads came first, it’s palms that are actually cycad-like.

Marler first became captivated by the cycad when as a child he observed the Cycas micronesica, one of some 300 known species of cycad, on the island of Guam. In particular the species’ massive cones left him in awe.

“I was so impressed as a young child that something that massive and beautiful could develop so rapidly on a tree. The mature male cone, which can reach heights greater than 50 centimeters, emerges from the stem tip and develops into its full geometric grandeur in less than 2 months,” Marler says.

“Consumption of flour made from the seeds of Cycas micronesica trees is one viable candidate as the source of this environmental toxin,” says Marler. But “continuing loss of trees is acutely compromising the ongoing research on these human neurological diseases.”

While Cycas micronesica was once a common sight on the island, today it is listed as Endangered by the IUCN Red List.

“The speed with which Cycas micronesica plummeted from the most abundant tree species on Guam in 2002 forestry surveys to IUCN endangered status in 2006 is perhaps unrivaled,” Marler says, who adds that 90% of the trees have vanished in the last seven years.

“In 2003 the armored scale Aulacaspis yasumatsui [a parasitic insect of plants] invaded Guam. I predicated this invasion in writing in 2000, shortly after the scale invaded Hawaii. I also tried to secure a ban on ornamental cycad imports as a means of keeping the scale out of Guam’s Cycas micronesica habitat. We don’t really know how the scale invaded Guam, but within a year of its invasion it had already become established […] Mortality of all Cycas micronesica seedlings and small juvenile trees was rapid, and mortality of large trees has been sustained for 4-5 years as of the end of 2010. This devastating insect has immigrated to Rota and some Palau islands, and is now threatening the Cycas plants in these islands,” says Marler.

As if this wasn’t enough another invasive species, a butterfly which deposits it’s young on cycads to feed off of them, landed in Guam in 2005 causing what Marler says is a “double-whammy to any [Cycas micronesica] population “.

Now, once non-lethal damage to the species—such as from feral pigs, deer, and local insects—are finishing off plants one-by-one. So, what can be done? Or is the Cycas micronesica doomed to go the way of its long-lost neighbors, the dinosaurs?

Marler suggests that infected islands fight invasive species with invasive species: researchers are looking at bringing in a natural predator of the scale insect—a “small, parasitic wasp” to keep the other invasive in check.

In addition the population of Cycas micronesica that is still free of invasive species must be protected from them.

“The Cycas micronesica plants in Yap [Island] habitats are currently the only plants that remain free of these lethal exotic insect pests. Our studies have revealed these Yap populations are also the most genetically isolated and oldest insular populations. Therefore, any effort that minimizes the risks associated with the scale or butterfly immigrating from Guam or Palau to Yap should be pursued,” Marler says.

Still, it’s not easy to rally the public around saving plants. Even though they provide us with much of our food, shelter, and medicine, they are often seen as an element of the background, rather than something immediate and important.

“As normally sessile [i.e. immobile] organisms, the recognized ability for humans to interact with plants pales in comparison to cute, fuzzy, highly mobile animals. While plants do respond to human stimulus, those responses are largely unimpressive and unnoticed by the general public,” Marler says.

But the more we realize how incredible all species are—from scales to polar bears to cycads—the better chance we have of saving the world’s varied and important life forms. 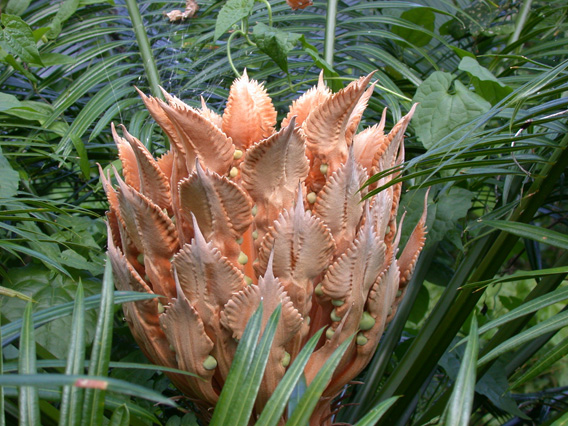 The healthy female reproductive structure of a Cycas micronesica, known as a “megastrobilus”. Photo courtesy of Thomas Marler. 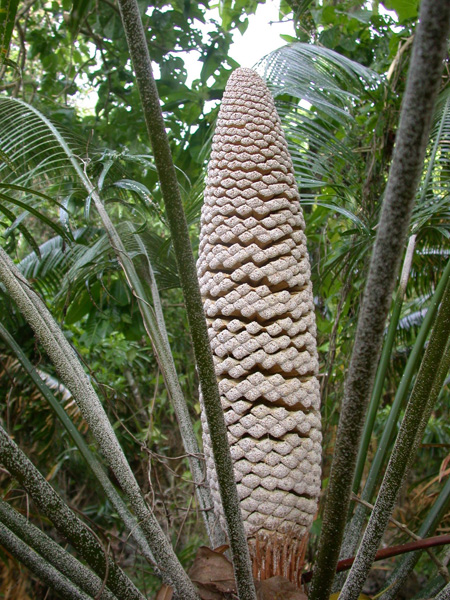 (10/04/2010) In all the discussions of saving the world’s biodiversity from extinction, one point is often and surprisingly forgotten: the importance of the world’s species in providing humankind with a multitude of life-saving medicines so far, as well as the certainty that more vital medications are out there if only we save the unheralded animals and plants that contain cures unknown. Already, species have provided humankind everything from quinine to aspirin, from morphine to numerous cancer and HIV-fighting drugs. “As the ethnobotanist Dr. Mark Plotkin commented, the history of medicine can be written in terms of its reliance on and utilization of natural products,” physician Christopher Herndon told mongabay.com. Herndon is co-author of a recent paper in the journal Biotropica, which calls for policy-makers and the public to recognize how biodiversity underpins not only ecosystems, but medicine.

(01/17/2008) A gigantic palm that flowers itself to death and exists as part of an entirely unique genus has been discovered in Madagascar; its name will be published in the Botanical Journal of the Linnean Society on 17 January 2008. The mystery palm has a huge trunk which towers over 18m high and fan leaves which are 5m in diameter – among the largest known in flowering plants. This is the most massive palm ever to be found in Madagascar.