The conservation program, EDGE, takes a second look at the world’s unique and threatened mammals.

What do the New Zealand greater short-tailed bat, the black-and-white ruffed lemur, and the numbat have in common? They are all new members of the Zoological Society of London’s EDGE’s top 100 most endangered and unique mammals list. Arguably the most innovative conservation program in the world, EDGE decides which species to focus conservation efforts on not based on popularity or fund-raising potential, but on hard data, only working with species that are considered the most endangered and evolutionarily distinct.

“EDGE mammals are one-of-a-kind and they represent the true diversity of life on earth. If we let these species disappear, their extraordinary features and unique behaviors will be lost forever,” explains Carly Waterman, EDGE Program Manager, in a press release.

The EDGE Top 100 Mammals List was created in 2007, but given new scientific discoveries and more data, the program decided it was time for a re-do. They were right: three years has overturned almost half of the list (49 of 100 mammals). Such drastic changes prove just how much new information on rare mammals has been collected recently.

“A lot has changed over the past three years. Some species (e.g. long-beaked echidnas) have become more threatened, while others (e.g. bumblebee bats) have become less so. Knowledge about the evolutionary relationships between species has also advanced, and several newly discovered species have, for the first time, been included in the mammal supertree,” explains EDGE’s blog.

While some of the new species are likely familiar to conservationists and the public—such as the Asian tapir and the dugong—many not only lack conservation attention, but lack any attention whatsoever: who’s heard of (let alone helped) the Bolivian chinchilla rat, the Rondo dwarf galago, or the black spotted cuscus? Yet, the EDGE hopes to change the fate of these dwindling forgotten species.

“There are mammals across the world requiring conservation attention, but EDGE species must be our top priority. Variety is truly the spice of life when it comes to the natural world and if we fail to preserve this variety, we are threatening our very own existence,” says Craig Turner, EDGE Conservation Biologist.

Some mammals’ fates may be impossible to change: a number of species on the list could already be extinct. No one has seen the New Zealand greater short-tailed bat since before the Beatles split-up, the lesser stick-nest rat has already been declared extinct once (but may survive), and a recent expedition—including EDGE scientists—has stated that the baiji, a river dolphin endemic to China’s Yangtze River, is likely vanished. Despite such dire predictions, optimism is a key trait of any conservationist, and EDGE hopes this new list will bring first-time attention to some of the world’s strangest.

Founded in 2007, EDGE objectively measures a species’ need for conservation attention by evaluating a species’ ‘evolutionary distinctness’ (its ED score) and its level of ‘global endangerment’ (GE score) to create a unique score for each species. The organization ranks the world’s species according to this EDGE score, or, in other words, their rarity and weirdness. The conservation program then selects 10 species to focus its efforts on. 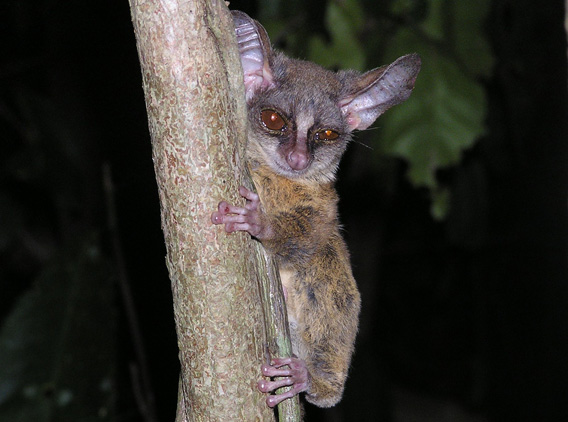 Only described by scientists in 1996, the Rondo dwarf galago (Galagoides rondoensis) is number 31 on the updated EDGE Mammals List. The species is surviving in two small pockets of forest in Tanzania. Photo by: Johan Karlsson. 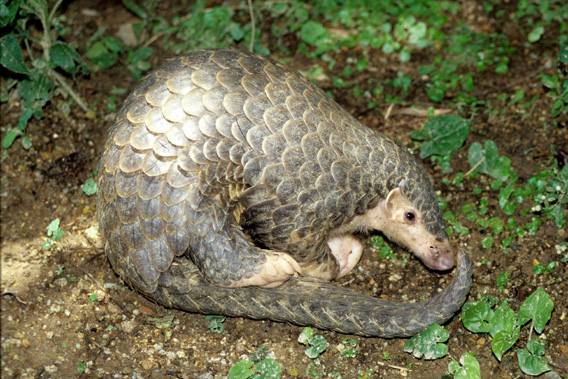 Poaching for its meat and the traditional medicine trade has pushed the Chinese pangolin (Manis pentadactyla) to number 79 on the new list. Photo by: Kadoorie Farm and Botanic Garden. 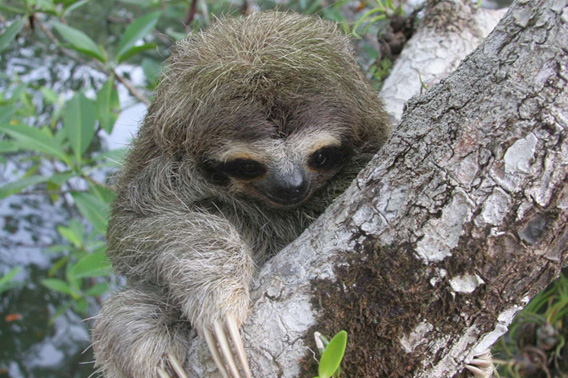 Endemic to a small island off Panama, the pygmy three-toed sloth (Bradypus pygmaeus) is threatened by destruction of its already small habitat. The sloth is number 15 on the new mammals list. Photo by: Bryson Voirin. 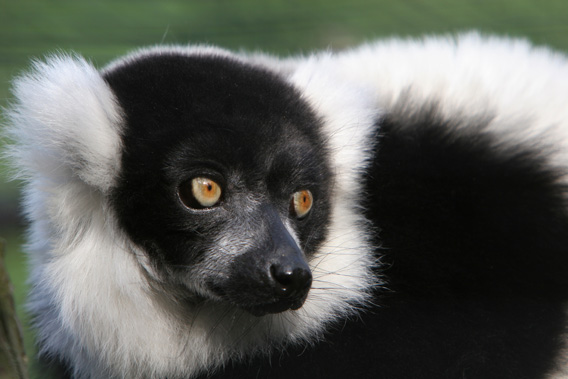 Habitat destruction, hunting, and selective logging has knocked the black-and-white ruffed lemur populations by 80% in less than 30 years. The species is listed as number 36 on the new list. Photo by: Tomalin Wildviews. 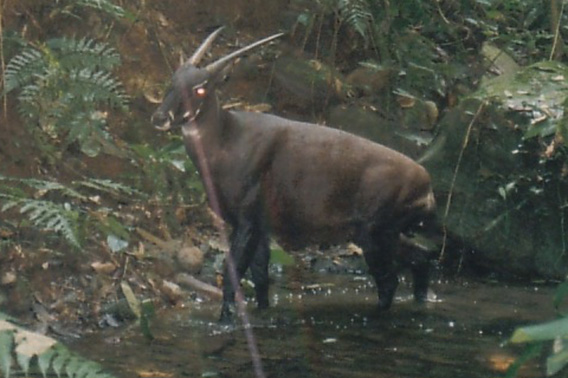 Only discovered in 1992, the saola (Pseudoryx nghetinhensis) is a shy forest antelope from the Annamite Mountains in Southeast Asia. Numbered at 42, the species is likely down to only a few dozen survivors. Habitat loss, trapping, and hunting could wipe it out rapidly. Photo by: Wildlife Conservation Society (WCS) .

Saving forgotten species: An interview with Carly Waterman, Program Coordinator of EDGE
(02/28/2008) In January 2007 a new conservation initiative arrived with an unusual level of media attention. The attention was due to the fact that the organization was doing things differently—very differently. Instead of focusing their efforts on the usual conservation-mascots like the panda or tiger, they introduced the public to long-ignored animals: photos of the impossibly unique aye-aye and a baby slender loris wrapped around a finger appeared in newsprint worldwide. The new initiative EDGE (Evolutionary Distinct and Globally Endangered), launched by the Zoological Society of London, was not concerned with an animal’s perceived popularity, rather the chose their focal species on a combined measurement of a species’ biological uniqueness and its vulnerability to extinction. Consequently, they hoped to make celebrities out of animals (big and small) most people had never heard of: the hairy-eared dwarf lemur, anyone?

Photos of the top 10 most threatened amphibians
(01/21/2008)Due to numerous factors—including habitat destruction, pollution, climate change, and chytrid fungus—amphibians are probably the most threatened taxon in the world, with more than one-third of species at risk of extinction. “Tragically, amphibians tend to be the overlooked members of the animal kingdom, even though one in every three amphibian species is currently threatened with extinction, a far higher proportion than that of bird or mammal species,” said Dr Jonathan Baillie, head of the EDGE organization which has just established an amphibian conservation program.

Saving the beautiful – and the ugly – creatures of the world: Why the EDGE Matters
(08/30/2007)
Allow me to wax poetic about the world’s newest wildlife organization, EDGE. I must admit I’m a little in love. This singular organization was founded in January as a part of the London Zoological Society. Its basic tenants remain similar to other endangered species programs: survey populations, set up conservation programs, work with local governments and communities to ensure protection. However, what is unique about EDGE is not their approach to saving species, but rather the species they choose to focus their efforts on. This year they have selected ten mammalian species: the Yangztee River Dolphin, Attenborough’s Long-Beaked Echidna, Hispaniolan Solenodon, Bactarian Camel, Pygmy Hippopotamus, Slender Loris, Hirola, Golden-rumped Elephant Shrew, Bumblebee Bat, and the Long-eared Jerboa.

Vietnam implements project to save one of the world’s rarest mammals, the shy soala

(02/24/2010) Vietnam’s central province of Thua Thien-Hue has approved a project to save the enigmatic saola. Listed as Critically Endangered, the saola (Pseudoryx nghetinhensis)—a type of forest antelope—is so rare and secretive that it was only discovered in 1992. It is considered by many to be one of the world’s rarest mammals.

(02/18/2010) Of the known 634 primate species in the world 48 percent are currently threatened with extinction, making mankind’s closes relatives one of the most endangered animal groups in the world. In order to bring awareness to the desperate state of primates, a new report by the International Union for the Conservation of Nature highlights twenty-five primates in the most need of rapid conservation action. Compiled by 85 experts the report, entitled Primates in Peril: The World’s 25 Most Endangered Primates, 2008–2010, includes six primates from Africa, eleven from Asia, three from Central and South America, and five from the island of Madagascar.