An expedition to the seamounts of the southern Indian Ocean has proven that the region is a biodiverse hotspot for squids. To date, the expedition has identified 70 species of squid comprising 20% of the world’s known squid species. But that’s not all: they have also uncovered new species.

At just over 2 feet long (27 inches or 70 centimeters), a species of squid found by the expedition proves to a brand new member of the chiroteuthid family. Squids from this family, which number around a dozen known species, employ bioluminescent organs to attract unwary prey.

Undertaken last year, the International Union for the Conservation of Nature (IUCN) expedition spent six weeks searching in the Indian Ocean. Now, researchers are busy sorting out the 7,000 samples.

“For ten days now 21 scientists armed with microscopes have been working through intimidating rows of jars containing fishes, squids, zooplankton and other interesting creatures,” Alex Rogers from the Department of Zoology of the University of Oxford said in a press release. “Many specimens look similar to each other and we have to use elaborate morphological features such as muscle orientation and gut length to differentiate between them.” 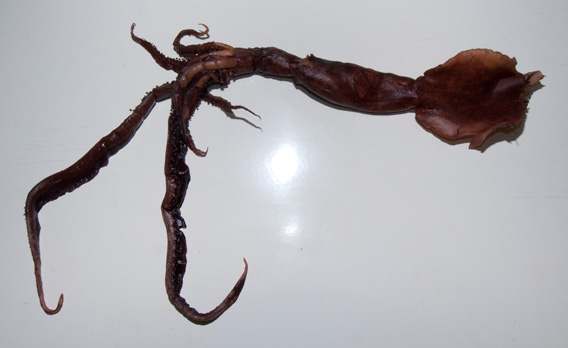 (04/29/2008) Marine biologists in New Zealand are thawing the corpse of the largest squid ever caught in order to learn more about one of the ocean’s most mysterious creatures.

(02/22/2007) Fishermen in New Zealand may have captured the largest Colossal squid ever recorded. It may be the first time a Colossal squid has ever been seen alive. The beast, weighing 450 kilograms (990 pounds), was eating a Patagonian toothfish (Chilean sea bass) hooked by fishermen when it was captured in the deep, frigid waters in the Ross Sea near Antarctica. The squid was reported to be 10 meters (33 feet) in length and took more than two hours to land.

(07/11/2007) A giant squid has washed up on a beach on the western coast of the Australian island Tasmania, reports Reuters.