A mysterious—and extremely hairy—animal has been photographed again in the Serengeti plains, known as the Masai Mara in Kenya. Robert Berntsen, a frequent traveler to East Africa, photographed the creature, almost certainly a gazelle, in Kenya’s Masai Mara Reserve. It was earlier photographed by Paolo Torchio in the same reserve.

“The driver’s first comment was if this was a young wildebeest left behind, but as we closed in on it obviously it wasn’t the case,” Berntsen told mongabay.com. “Could it be a hybrid of some kind or perhaps a mutation? We could not conclude but after several minutes of just observing and discussing I eventually woke up, grabbed my camera and made a few shots.”

According to Berntsen, the animal was near a group of Thomson’s gazelles, though on the “outskirts”. After discussion, Berntsen and his traveling partners decided that most likely the animal was a “mutant Thomson’s gazelle, probably a young male.” However, he says “this explanation was just concluded on what we had seen while eliminating other explanations we found less probable.”

After watching the animal for ten minutes Berntsen describes its unique features as such:
“its head in particular had a lot of dark long hair which in a way hided the true form of its head and mouth. All my pictures are showing the animal from its left side, but observing the head from the front it seems to be significantly broader than with a normal gazelle. In addition I had the impression that it had an undershot jaw. Perhaps was this impression caused by the thickness of the lower lips or the tissue in the chin, or the general prominence of the cheeks and the chin?”

Berntsen also noticed what he thought were enlarged blood vessels on the head, which, he says, “is supported by looking at my pictures, but it might be an illusion caused by hair twinned together.”

Berntsen saw a number of healthy cheetahs in the area, including a well-fed mother with six cubs, which may not bode well for the mystery animal.

“Cheetahs are very good at seeing gazelles with any kind of problems, so I believe our special gazelle would have a high risk of falling victim to one of the many predators looking for a meal if it should have any problem in moving or running.”

Past commentators have mentioned that the animal could be suffering from Cushing’s disease or a mutation.

Special thanks to Wildlife Extra for the tip on this. 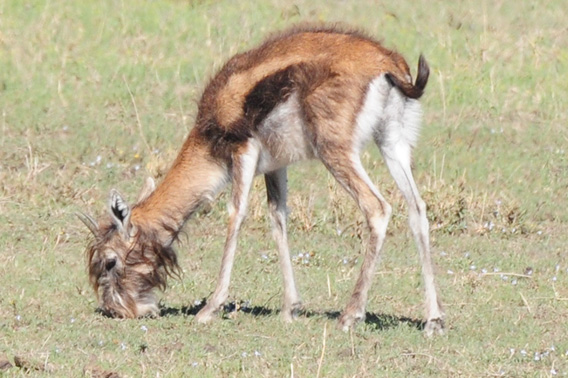 The strange animal of the Serengeti. Photo copyrighted by: Robert Berntsen.

(08/19/2010) Is it a hairy goat roaming the plains? An antelope with some genetic mix-up? At this point no one knows. This strange creature was photographed in Kenya’s Masai Mara National Reserve. Apart of the Serengeti plains, the Masai Mara covers 1,500 square kilometers and is home to a wide-range of iconic African savannah species, from elephants to lions and giraffes to hippos.The photos were first published on conservation organization WildlifeDirect’s website.

(10/22/2010) The mystery of the legendary chupacabra, a beast that is said to drain the blood of domestic animals at night, has been solved according to a scientist at the University of Michigan.

Photo: Mystery ‘alien-beast’ in Panama is likely a sloth

(09/19/2009) The ‘mystery alien-beast’ discovered by four teens in a community in Panama and widely reported in the media over the past few days is likely a deformed sloth.

(02/20/2009) A photo of ‘100-foot monster snake’ that has surfaced on the Internet and is certainly fake has stirred up a lot of interest in recent days, reports the Telegraph Online.

(10/14/2008) In 2003 an Indian forester claimed to have seen a Yeti three days in a row. Dipu Marak, general secretary of the Achik Tourism Society and Yeti enthusiast, followed the man’s trail and discovered strands of hair that he believed belonged to the mysterious creature. According to popular tradition, the Yeti is an ape-like animal that lives in the Himalayan forests.

Bigfoot “discovery” looks to be a hoax

(08/18/2008) A much-hyped press conference claiming to present evidence of the existence of Bigfoot offered little in the way of proof but a lot of shameless self-promotion by the “discoverers”.