As more nations adopt better laws and policies to save and restore forests at home, they may, in fact, be outsourcing deforestation to other parts of the world, according to a new study in the Proceedings of the National Academy of Sciences (PNAS). Looking at six developing nations where forests are recovering—instead of receding—the study found only one of them did not outsource deforestation to meet local demand for wood-products and food, a process known as ‘leakage’.

“Our study found that strengthened forest-conservation policies and economic expansion often increased the demand for imported timber and agricultural products, which contributed to deforestation abroad.” explained study co-author Eric Lambin of Stanford University in California and the University of Louvain in Belgium, in a press release.

The study looked at China, Chile, Costa Rica, El Salvador, India, and Vietnam, each of which went from a country with net deforestation to net reforestation over the past 50 years. However, saving trees locally in some cases meant cutting trees abroad: in all the countries but India, net reforestation meant a decline in timber harvests and new agriculture, thereby creating increased demand for exports from nations with illegal logging (such as Brazil) or corruption (such as Indonesia).

On average for every 100 acres reforested locally in the five nations (not including India) 22 acres were cut abroad. However, that figure has jumped in the last five years to 52 acres cut abroad for every 100 reforested. This means that for every two acres saved locally, one acre was lost abroad to feed consumption.

“If local forest protection merely shifts forest-conversion pressure to natural forests elsewhere in the world, we will not achieve a net gain for nature at a global scale,” Lambin said. In fact, despite decades of efforts by conservationists and policymakers, forest cover continues to decline worldwide.

But, Lambin urged the public not to misunderstand the findings.

“This study does not imply that the efforts of these countries to protect their forests was useless, but that international trade in wood and agricultural products can decrease the global environmental benefits of national forest-protection policies,” he said.

Authors said officials at the up-coming Climate Summit in Cancun, Mexico should take the paper’s findings into account, especially when negotiating a program to pay nations to keep forests standing called Reducing Emissions from Deforestation and Forest Degradation (REDD).

“The REDD mechanism that is under negotiation should include guardrails to assure that countries that commit to decrease their rate of deforestation do not export their deforestation,” said co-author Patrick Meyfroidt, also with the University of Louvain.

Last year, a report by the Environmental Investigation Agency (EIA) warned that REDD would not work unless policymakers addressed consumption issues worldwide and put the responsibility as much on the consuming country as on the producer. 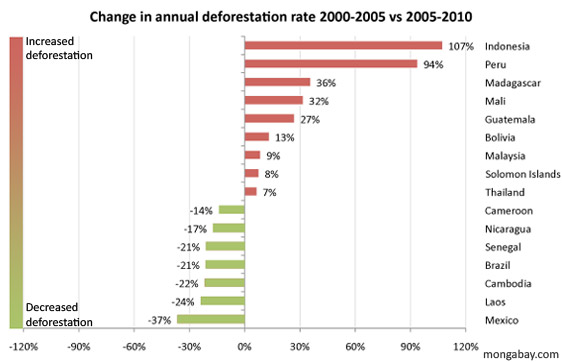 (10/07/2010) Deforestation rates in tropical countries dropped significantly during the first decade of the 21st century relative to the 1990s, reveals new data released by the Food and Agriculture Organization of the United Nations (FAO). FAO figures show deforestation across 121 tropical countries averaged 9.34 million hectares per year between 2000 and 2010, down from 11.33 million hectares per year in the 1990s. The decline has accelerated since 2005 due Brazil’s dramatic reduction of deforestation in the Brazilian Amazon, which peaked at 27,772 square kilometers in 2004 but is expected to come in at less than 8,000 for 2010.