Evo Morales for the Nobel Prize?

Does Evo Morales merit a Nobel peace prize for his admirable work on climate justice? Former prize winners, as well as the Bolivian Congress, believe he deserves it and both have launched an international campaign on behalf of Bolivia’s indigenous president. In April of this year, Morales helped to organize the First World People’s Conference on Climate Change and the Rights of Mother Earth, which drew a whopping 35,000 people to the Bolivian city of Cochabamba. Designed as a kind of counter summit to the official Copenhagen conference of 2009, which proved a debacle in terms of reining in climate change, Cochabamba represented a milestone in social mobilization.

The Andean leader argues that Copenhagen was inadequate in fighting climate change. Indeed, the agreement only pledged to raise approximately $30 billion over three years to help impoverished nations counter the worst effects of global warming. Morales’ inspired Cochabamba summit by contrast has declared that $300 billion a year is necessary to cope with global warming and calls for the formation of an innovative international climate court. The Bolivian President’s right hand man, Bolivia’s ambassador to the United Nations Pablo Solón, has remarked “you might be on one side of the world, but what you do is affecting somebody else in another continent very far away. There might be, there will be, millions of people who are affected, and may even die, because of those actions. Is this not genocide?”

Needless to say, Morales’ climate activism has not gone over well in Washington. When Evo struck out on his own and opposed the Copenhagen accord, which was strongly backed by the U.S. and other heavy emitters at the eleventh hour, the State Department cut its climate aid to Bolivia by $3 million. “We weren’t necessarily expecting this administration to…so blatantly use [the aid cutoff] against one of the poorest countries in Latin America,” indignantly remarked Angélica Navarro, Bolivia’s lead climate negotiator. 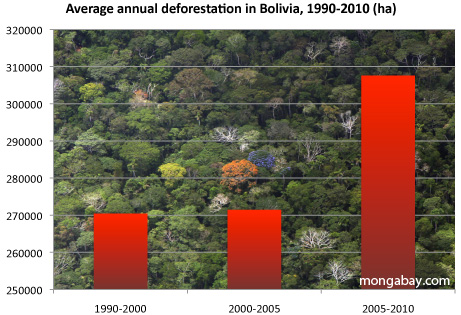 Despite the threats, Morales refuses to back down from his controversial stances. Striking an anti-imperialist theme, the Bolivian remarks that the atmosphere must be “decolonized” and that rich nations are using more than their fair share of the atmosphere by emitting too much carbon. In a nod to his own socialistic bent, Morales declares “there are two ways forward: either save capitalism, or save Mother Earth.”

Even as the Obama administration obstructs and delays, Bolivians suffer the worst ravages of climate change. Take for example the Andean nation’s glaciers which supply drinking water to cities and which are rapidly disappearing. If Bolivia suffers from acute water shortages, this in turn could give rise to internal climate refugees, thus further destabilizing an already very impoverished nation. If that were not serious enough, Bolivia also shares a wide swath of the Amazon rainforest which could be subject to drought [for a further discussion of these problems, see my recent book No Rain in the Amazon: How South America’s Climate Change Affects the Entire Planet].

Later this month, Morales will be taking his climate justice crusade to Cancún, Mexico for yet another international summit on global warming. “If Cancun is the same as Copenhagen,” Morales says, “then…the United Nations will lose their authority among people in the world.” It’s unlikely, however, that Evo’s radical environmental critique will resonate with the world’s chief carbon emitters: while Bolivia is pushing for the world to cut its emissions by at least 95 per cent by 2050 and for affluent countries to cut their emissions by more than 100 per cent by 2040 — meaning they would have to plant trees that more than make up for the fuel they burn —- a UN climate draft only recommends cutting world emissions by at least 50-85 per cent by mid-century and at least 80-95 per cent for developed nations. There’s a lot riding on Cancún, though unfortunately the event is not expected to draw many world leaders and some believe that no legally binding agreement will result from the meeting’s lengthy deliberations.

While a diplomatic fiasco at Cancún would surely be disappointing, the Nobel committee can focus more attention on future summits by awarding its coveted prize to Bolivia’s famed indigenous president. Technically, climate change does not fall under the rubric of peacemaking and disarmament, but in recent years the Nobel committee has been using its prize to throw a spotlight on worthy causes and today the award recognizes the fight for human rights, democracy, elimination of poverty, the sharing of resources and the environment.

In 2004 the committee awarded a Nobel to Kenyan environmentalist Wangari Maathai, and, three years later, to Al Gore for his work on climate change. The former U.S. vice president shared the prize with the United Nations’ Intergovernmental Panel on Climate Change or IPCC which had been writing scientific reports on global warming for two decades. The panel comprised more than 2,000 researchers from more than 100 countries, and its reports blamed human activities for climate changes ranging from increased heat waves to floods.

It’s time for the Nobel Committee to recognize not only high profile former statesmen in the United States but those who campaign most vociferously for climate justice in the Global South. Many people in the developed world have little understanding of how their actions may affect South America. That however could change if the Nobel Committee placed a spotlight on Morales, a politician who represents a poor and disadvantaged nation which will be on the front lines of devastating climate change.

Nikolas Kozloff is the author of No Rain in the Amazon: How South America’s Climate Change Affects the Entire Planet (Palgrave, 2010) and Revolution! South America and the Rise of the New Left (Palgrave, 2008). Visit his website, www.nikolaskozloff.com