Paleontologists have unearthed fossil remains of a giant species of penguin that roamed the Earth 36 million years ago, according to research published in Science.

Excavating a site in Peru, Julia Clarke, of The University of Texas and colleagues, found the first extinct penguin with preserved evidence of scales and feathers. The new species Inkayacu paracasensis, or Water King, stood nearly five feet tall, roughly twice the size of the Emperor penguin, the largest living penguin.

“Before this fossil, we had no evidence about the feathers, colors and flipper shapes of ancient penguins. We had questions and this was our first chance to start answering them,” Clarke said in a statement. 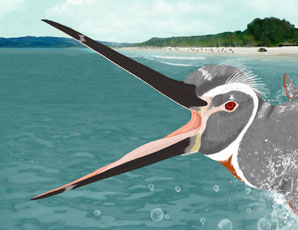 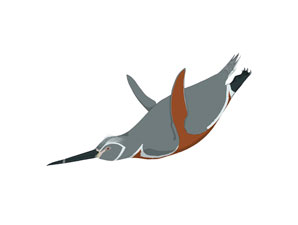 
The researchers say the find sheds light on the evolution of penguins, revealing that ancient penguins had similar flipper and feather shapes of present-day penguins, but different coloration. The University of Texas statement explains:

Like living penguins and unlike all other birds, Inkayacu’s wing feathers were radically modified in shape, densely packed and stacked on top of each other, forming stiff, narrow flippers. Its body feathers had broad shafts that in living penguins aid streamlining the body.

Bird feathers get some of their colors from the size, shape and arrangement of nanoscale structures called melanosomes. Matthew Shawkey and Liliana D’Alba, coauthors at the University of Akron, compared melanosomes recovered from the fossil to their extensive library of those from living birds to reconstruct the colors of the fossil penguin’s feathers.

Melanosomes in Inkayacu were similar to those in birds other than living penguins, allowing the researchers to deduce the colors they produced. When the team looked at living penguins, they were surprised to find their colors were created by giant melanosomes, broader than in the fossil and in all other birds surveyed. They were also packed into groups that looked like clusters of grapes.

The researchers conclude that ancient penguins were reddish-brown and gray, rather than the black and white “tuxedo” pattern that characterizes present-day penguins. The scientists speculate the color change may be a product of shifts in predators and environmental conditions over time.

“Insights into the color of extinct organisms can reveal clues to their ecology and behavior,” said co-author Jakob Vinther at Yale University.