Researchers have identified a previously unknown species of carnivore lurking in one of the world’s most endangered lakes.

“We have known for some time that a carnivore lives in the Lac Alaotra marshes, but we’ve always assumed it was a brown-tailed vontsira that is also found in the eastern rainforests,” said Fidimalala Bruno Ralainasolo, a conservation biologist working for Durrell Wildlife Conservation Trust who originally captured the new carnivore. “However, differences in its skull, teeth, and paws have shown that this animal is clearly a different species with adaptations to life in an aquatic environment.”

Durrell’s vontsira is the first new carnivorous mammal discovered in Madagascar in 24 years. Little is known about the species, which is roughly the size of a cat and is described in the latest issue of the taxonomic journal Systematics and Biodiversity.

“It is a very exciting discovery. However, the future of the species is very uncertain.” 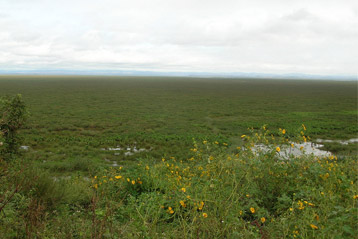 Lac Alaotra, Madagascar’s largest lake, was the country’s rice bowl, responsible for feeding a large part of the island’s population. At one time the vast lake was surrounded by tropical forest, but today this has been cleared for agriculture, and the hills are now bare and riddled with “lavaka,” deep, red, eroded gullies. With rain – the soil left unprotected without forest cover – tons of red earth bleed into the lake, leading it to disappear. Today the lake has a maximum dry season depth of only two feet (60 cm) and the region can no longer produce enough rice to supply the growing population. Photo © Durrell Wildlife Conservation Trust.

Lac Alaotra is Madagascar’s largest, and most endangered lake. Sedimentation from deforested watersheds, pollution from pesticides and fertilizers, and burning and agricultural conversion of the lake’s reed beds have left Lac Alaotra’s ecosystem in dire straights.

Habitat loss and introduction of alien plants have already driven at least well known species to extinction: the Alaotra grebe (Tachybaptus rufolavatus), which was last seen in 1985.

“This species is probably the carnivore with one of the smallest ranges in the world, and likely to be one of the most threatened,” said Frank Hawkins of Conservation International. “The Lac Alaotra wetlands are under considerable pressure, and only urgent conservation work to make this species a flagship for conservation will prevent its extinction.”

(08/19/2010) Is it a hairy goat roaming the plains? An antelope with some genetic mix-up? At this point no one knows. This strange creature was photographed in Kenya’s Masai Mara National Reserve. Apart of the Serengeti plains, the Masai Mara covers 1,500 square kilometers and is home to a wide-range of iconic African savannah species, from elephants to lions and giraffes to hippos.The photos were first published on conservation organization WildlifeDirect’s website.

(01/26/2010) A species dubbed “the world’s most miserable-looking fish” is at risk of extinction due to poor fishing practices, reports The Daily Telegraph. The Blobfish (Psychrolutes marcidus), a gelatinous fish that lives at depths up to 800 meters, where it feeds on drifting organic matter, is being accidently captured by deep-sea trawlers seeking crabs and lobsters off southeastern Australia, according to Callum Roberts, a marine scientist with the University of York.

(01/20/2010) Imagine, forty million years ago a great tropical storm rises up on the eastern coast of Africa. Hundreds of trees are blown over and swept out to sea, but one harbors something special: inside a dry hollow rests a small lemur-like primate. Currents carry this tree and its passenger hundreds of miles until one gray morning it slides onto a faraway, unknown beach. The small mammal crawls out of its hollow and waddles, hungry and thirsty, onto the beach. Within hours, amid nearby tropical forests, it has found the sustenance it needs to survive: in a place that would one day be named Madagascar.

(11/19/2009) Federal agents from the U.S. Fish and Wildlife Service raided Gibson Guitar’s factory Tuesday afternoon, due to concerns that the company had been using illegally harvested wood from Madagascar, reports the Nashville Post.

Rediscovery of the solenodon, a rare venomous mammal, in Haiti

(01/09/2009) In the journal Oryx researchers from EDGE, a program of the Zoological Society of London (ZSL), have announced the rediscovery of a small population of Hispaniolan solenodons in Haiti. At the same time scientists in the Dominican Republic have taken the first ever footage of this endangered mammal.

(01/17/2008) Scientists have discovered a parasite that transforms the appearance of its host, an ant, into that of a juicy red berry that birds are more likely to eat and disperse into new habitats, reports an article published in The American Naturalist. It is the first example of fruit mimicry caused by a parasite, say the researchers who discovered the parasite, a nematode or roundworm found in the canopy of tropical forests ranging from Central America to the lowland Amazon.

(02/14/2007) A pink worm-like snake has been rediscovered in Madagascar more than 100 years after it was first found. The snake, which is blind and measures about ten inches long, is described in the February 1, 2007 edition of Zootaxa, a leading taxonomic journal.

(02/13/2007) A new study published in PLoS ONE, an open online journal, reports that nocturnally migrating songbirds are preyed upon by giant bats. The findings go against the belief that night-flying birds lacked predators.

(01/29/2007) A new study shows that the Asian snake Rhabdophis tigrinus becomes poisonous by sequestering toxins from its prey which consists of venomous toads. While sequestering defensive toxins from prey is unusual among terrestrial vertebrates it is not unknown. Research published last year by Valerie C. Clark of Cornell University showed that poison dart frogs (Dendrobates species) and their Madagascar counterparts, the Mantella frogs, sequester toxic skin chemicals, called alkaloids, from the ants they eat. These alkaloids protect the frogs from predation. Similarly, some garter snakes are known to store tetrodotoxin from ingested newts while birds in New Guinea appear to sequester poisons from insects.

(05/03/2005) A group of English scientists are spending a month in the Gobi desert in search of the Mongolian Death Worm, a fabled creature said to lurk in the sands of the hostile region. The three to five feet long long creature is known to the locals as Allghoi khorkhoi, Mongolian for intestine worm because it is reported to look like the intestine of a cow. Mongolian nomads have made extraordinary claims about the animal, reporting that the death worm can spit a corrosive yellow saliva that acts like acid and that they have the ability to generate blasts of electricity powerful enough to kill a full grown camel.