Fish were not expected to be able to survive so deep, but scientists have captured footage of a new species of a scavenger-hunting snailfish swimming at an astounding 7,000 meters below the surface. The video, taken from an 8,000 meter-deep sea trench in the Southeast Pacific Ocean, showed a level of biodiversity that surprised seasoned marine biologist, who have previously surveyed five other deep sea trenches.

“Our findings […] will prompt a rethink into marine populations at extreme depths,” said Alan Jamieson from the University of Aberdeen’s Oceanlab, who led the expedition.

The expedition also captured footage of cusk-eels feeding for 22 hours. Researchers aren’t yet sure if the cusk-eels are new to science, but believe it’s a possibility. Jamieson told the BBC that a cusk-eel would need to be brought to the surface to determine whether or not it’s a new species.

“Our investigations also revealed a species of crustacean scavengers—known as amphipods—which we previously did not know existed at these depths in such great numbers,” Jamieson said. “These are large shrimp-like creatures of which one particular group, called Eurythenes, were generally far larger and occurred much deeper in this trench than has ever been found before.” The amphipods were photographed at 7000 and 8000 meters below the surface.

Researchers used fish bait bought on land to attract scavengers like the amphipods and cusk-eels. For their part, snailfish feed on the scavengers.

The expedition was apart of the HADEEP program—a collaborative research project between the University of Aberdeen’s Oceanlab and the University of Tokyo’s Ocean Research Institute, including support from New Zealand’s National Institute of Water and Atmospheric research institute (NIWA). 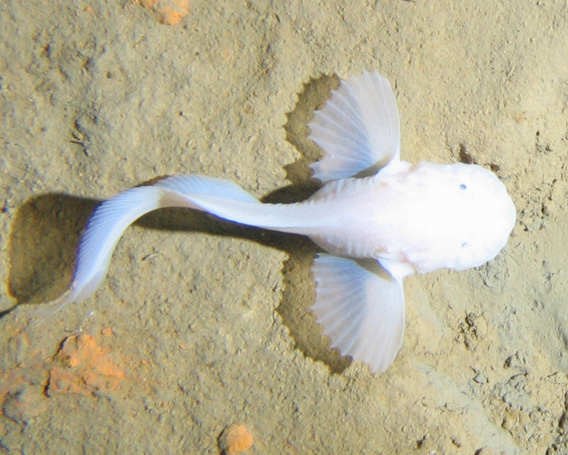 New snailfish species at 7,000 meters below sea level. Photo courtesy of the University of Aberdeen. 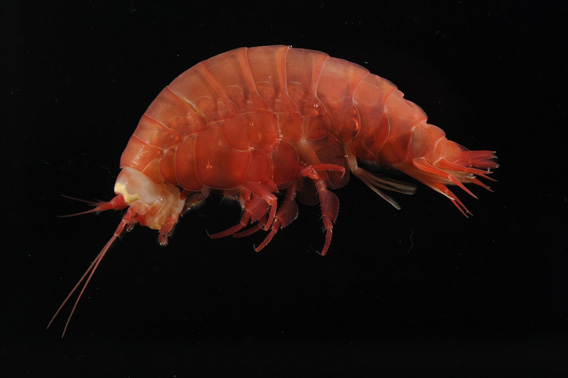 Amphipod. Photo courtesy of the University of Aberdeen. 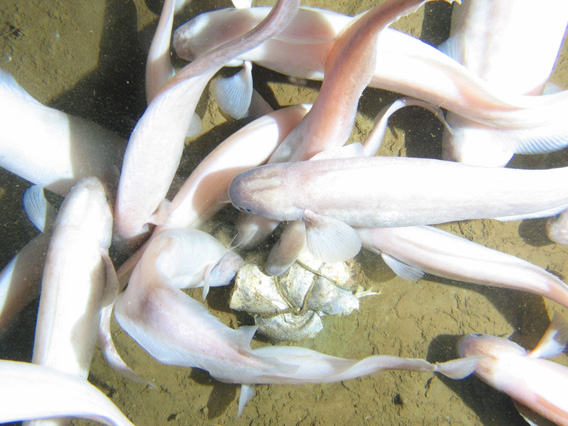 Cusk-eels in a feeding frenzy. Photo courtesy of the University of Aberdeen. 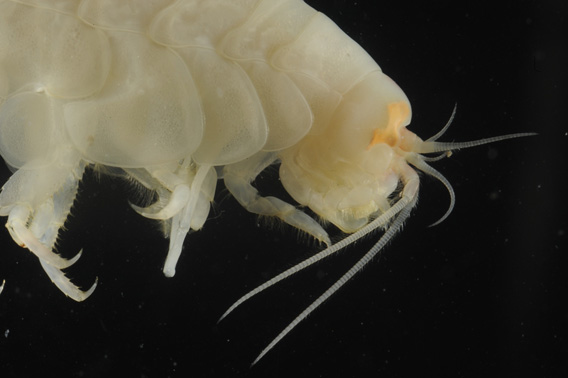 Another amphipod. Photo courtesy of the University of Aberdeen.

(10/05/2010) After a decade of research in oceans around the world, scientists released the final results of the first Census of Marine Life (CoML) on Monday. The research, which involved 2,700 scientists from more than 80 countries, increased the number of known marine species from 230,000 to 250,000.

What is the most unexplored ecosystem on Earth?

(08/02/2010) One should be forgiven for thinking that the most under-explored ecosystem in the world is tropical rainforests or cave systems since new species are frequently uncovered in such places. But new research in the open-access journal PLoS ONE finds that the least explored part of the world is the deep sea, especially what lies beneath the open ocean. Ironically, not only does this ecosystem remain the least explored, it is also the world’s largest habitat.

(03/16/2010) In a discovery at the bottom of the world that could have implications on the search for extraterrestrial life, researchers were astounded to find an amphipod swimming beneath a massive Antarctic ice sheet.

Videos and Photos: over 17,000 species discovered in waters beyond the sun’s reach

(11/23/2009) Deep, deep below the ocean’s surface, in a world of ever-present darkness, one would expect few, if any, species would thrive. However, recent expeditions by the Census of Marine Life (CoML) have found an incredible array of strange, diverse, and amazing creatures. To date a total of 17,650 species are now known to live in frigid, nearly lightless waters beyond the photic zone—where enough light occurs for photosynthesis—approximately 200 meters deep. Nearly 6,000 of these occur in even harsher ecosystems, below depths of 1,000 meters or 0.62 miles down.

(09/22/2009) The discovery of Eastern Pacific black ghostshark Hydrolagus melanophasma is notable for a number of reasons. It is the first new species of cartilaginous fish—i.e fish whose skeletons are made entirely of cartilage, such as sharks, rays, and skate—to be described in California water since 1947. It is also a representative of an ancient and little-known group of fish.

(09/22/2009) The importance of a whale to the oceanic ecosystem does not end with its life. After dying, a whale’s body sinks to the bottom of the ocean and becomes food for many species, some of whom specialize on feeding on these corpses.