A new global assessment of forest stocks by the U.N. Food and Agriculture Organization (FAO) shows continuing loss of primary forests since 2005 despite gains in the extent of protected areas.

Among countries with significant primary forest cover, Nigeria had the fastest rate of loss (which does not neccessarily reflect dforestation, but can mean first time selective logging of old growth forest), approaching 20 percent per year from 2005 to 2010, followed by South Korea (3.95 percent per year), Malawi (3.77 percent), Guatemala (3.72 percent), Sierra Leone (3.21 percent), Central African Republic (2.94 percent), Gabon (2.16 percent), and Nicaragua (2.16 percent). Brazil led all countries in total primary forest loss during the 2005-2010 period, losing 2.3 million hectares per year. It was followed by Papua New Guinea (427,000 hectares per year) and Gabon (330,000 ha). Primary forests today account for 36 percent (1.4 billion ha) of the world’s forest area. 81 countries reported they have no remaining primary cover, although in some cases this may be due to a lack of data. 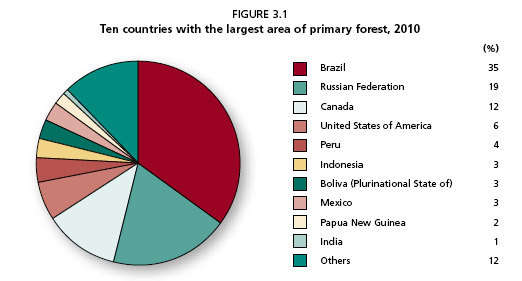 The FAO report finds that tree plantations continue to expand, helping offset the loss of natural forests. Temperate countries report the largest extent of planted forests, but China led the world in expansion over the past 20 years, planting an average of 1.9 million hectares of plantations per year. In the tropics, India reported the largest total increase in planted forest area (5 million hectares) over the past two decades. Oil palm plantation expansion in Indonesia and Malaysia was excluded from the estimates since FAO considers oil palm an agricultural crop, rather than a ‘planted forest’.

FAO’s assessment finds that the forestry sector is generally a money-losing proposition for governments. Public expenditure on forestry averaged $7.50 per hectare worldwide, but exceeded $20 per hectare in Asia. Total forest revenue collection was about $4.50 per hectare globally. Forest management and conservation directly employs about 10 million people worldwide, although many more depend on forests for informal livelihoods. The total value of forest products was estimated at $122 billion for 2005. Timber accounted for 71 percent of the value, followed by non-wood forest products (15 percent) and fuelwood (14 percent). Industrial roundwood (logs) had an average value of $51 per cubic meter.

About 80 percent of the global forest area is publicly owned, while 18 percent is privately held.

FAO reports fire is significantly under-appreciated as a threat to forests. An average of 1 percent of forest cover was reported to be “significantly affected” each year by forest fires, but this figure likely represents a significant underestimate since many countries did not report data. More than 90 percent of fires are classified as wildlifes, rather than prescribed burns.

The Forest Resources Assessment 2010 contains data from 233 countries. More than 900 experts from 178 countries contributed to the report, which was four years in preparation.

While the FAO remains the standard for statistics on forest cover, the data collection process suffers from self-reporting: some countries report more accurately than others. FAO is working with partners on a global remote sensing survey of forests that will help better monitor changes in forest cover and land use. Furthermore, rising interest in the proposed reducing emissions from deforestation and degradation (REDD) mechanism, has sparked new independent efforts to track forests.

NOTE: The text on primary forest loss has been clarified under the final photo caption and in the text. Some readers have been confused about the menaing of “loss of primary forest”. This refers to undisturbed (old growth) forest that is reclassified as ‘other naturally regenerated
forest’ because of selective logging and other human interventions. It does not neccessarily mean deforestation.

(10/07/2010) Deforestation rates in tropical countries dropped significantly during the first decade of the 21st century relative to the 1990s, reveals new data released by the Food and Agriculture Organization of the United Nations (FAO). FAO figures show deforestation across 121 tropical countries averaged 9.34 million hectares per year between 2000 and 2010, down from 11.33 million hectares per year in the 1990s. The decline has accelerated since 2005 due Brazil’s dramatic reduction of deforestation in the Brazilian Amazon, which peaked at 27,772 square kilometers in 2004 but is expected to come in at less than 8,000 for 2010.

(09/29/2010) In recent years there has been an explosion in the number of satellite-based monitoring applications and technologies, which is perhaps best exemplified in the eyes of the public by Google Earth, which allows anyone with a decent internet connection to view overhead images of nearly any place on Earth. But these new applications are also helping scientists more effectively monitor environmental change, including the fluctuations in polar sea ice, shifts in oceanic plankton, and deforestation. An important factor in the expanded use of satellite imagery has been the U.S. government’s free Landsat Data Distribution Policy, which allows free or inexpensive access to data captured by Landsat satellites, which have been collected data on a regular basis since 1972. But the Landsat program is not presently operating at its full capacity, increasing the risk of a ‘data gap’ before a new system is in place in 2012.

Amazon deforestation falls significantly in 2010, according to preliminary data

(08/31/2010) Deforestation in the Brazilian Amazon is down significantly since last year, according to preliminary estimates released by Brazil’s National Institute for Space Research (INPE) and Imazon, a Brazil-based NGO that tracks forest loss and degradation across the Amazon. Analysis of NASA MODIS data by Imazon found some 1,488 square kilometers of forest were cleared during the 12 months ended July 31, 2010, down 16 percent from the same period last year, when 1,766 square kilometers were deforested. Meanwhile analysis by INPE shows an even steeper drop from 4,375 square kilometers in August 2008 through July 2009 to 2,296 square kilometers in the current period, a decline of 48 percent. The discrepancy between INPE’s and Imazon’s estimates results from differences in how deforestation is tracked.

(06/24/2010) The Association for Tropical Biology and Conservation (ATBC) has released a resolution urging the UN to change its definition for ‘forest’, before the controversial definition undermines conservation efforts, biodiversity preservation, carbon sequestration, and the nascent REDD (Reducing Emissions through Deforestation and forest Degradation).