Coral reefs and rainforests seem to have little in common beyond the fact that they are both hotspots of diversity, yet groundbreaking research is showing how these different ecosystems—when intact—may actually seed clouds and produce rainfall.

According to a recent study in Science, an undisturbed Amazon rainforest acts as its own ‘bioreactor’, whereby clouds and precipitation are produced by the abundance of plant materials in the ecosystem.

“The trees basically ‘sweat out’ organic molecules that react with compounds in the atmosphere, producing tiny particles that are around 20 to 200 nanometers in size,” explains Markus Petters, an assistant professor at North Carolina State University and one of the members of the study, in a press release. “These particles seed the clouds. In addition, other biological particles form the ice nuclei for the clouds.”

Rainfall over the Amazon River in Colombia, photo by Rhett A. Butler 2010. 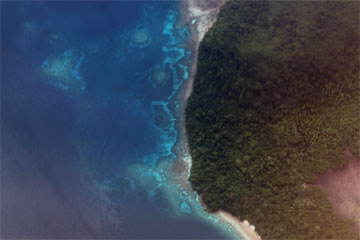 Essential for the formation of precipitation, these ice nuclei are produced by supermicron particles, i.e. with a diameter measuring greater than a micrometer. Eighty percent of supermicron particles above the Amazon were produced by rainforest life. In other words, in a pristine rainforest clouds and precipitation are instigated by organic materials from the forest.

But, it’s not just tropical forests that new research is showing have the power to produce rain. Dr. Graham Jones of Australia’s Southern Cross University believes that a substance produced by thriving coral reefs also seeds clouds and brings precipitation.

“Coral reefs produce a volatile substance called dimethylsulphide or DMS which oxidizes in the atmosphere to produce cloud condensation nuclei (CCN). These are tiny sulfur aerosol particles around which water vapor condenses to form clouds,” Jones explained to mongabay.com, adding that, “water vapor cannot form clouds without these tiny aerosol particles being present.”

The DMS is produced by the algae living in coral tissues, causing the corals to produce the cloud-seeding substance, DMS, on a daily basis.

Rainfall over the Pantanal in Brazil, photo by Rhett A. Butler 2009. 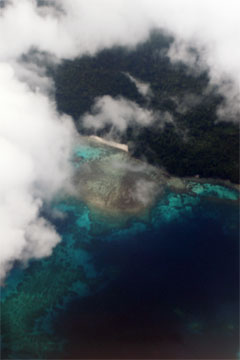 Jones says that his research shows that the coral reef-produced rain may actually feed rainforests along Australia’s northern coast.

However amazing these studies sound, the boldest theory to date linking ecosystems and precipitation was produced by two Russian scientists who say forests, both temperate and tropical, act as biotic pumps to move rainfall from coastlines to the interior of continents. Long-ignored by the scientific community, the theory received some attention over the past couple years, yet remains controversial.

While scientists are still trying to understand to what extent forests and reefs are responsible for precipitation and rainfall patterns, there is no question that these ecosystems are hugely imperiled.

The Amazon faces myriad threats from commercial agriculture, cattle ranching, logging, oil and gas, dams, road construction, and slash-and-burn farming. From 1970-2005, the Amazon was been reduced by 600,000 square kilometers (232,000 square miles) in Brazil, an area the size of Ukraine and nearly 20 percent of Brazil’s total rainforest.

Coral reef and clouds off Mexico’s Yucatan Peninsula, photo by Rhett A. Butler 2004.

Coral reefs are no better off. Pollution, ocean acidification, overfishing, and climate change may cause many coral reefs to vanish before the end of the century. In addition, Jones has found in his studies on reefs that even a slight rise in ocean temperatures could affect the coral’s ability to produce the aerosol particles, making climate change a significant threat to clouds (and precipitation) produced by coral reefs.

If these theories withstand the test of time, and science, they could have widespread implications for the conservation of both forests and coral reefs, adding a new and vital ecosystem-service provided by these two threatened environments: the ‘makers’ and ‘movers’ of precipitation.

This blog post is part of a larger online conversation about water. October 15, 2010 is Change.org’s Blog Action Day and this year, we’re all talking about water. Visit change.org to join the discussion.