The effect of forest regeneration strategies on beetles

As conservationists attempt to find the best way to re-establish forests in abandoned areas, a new study in the open-access journal Tropical Conservation Science compares the impacts on bess beetles of different method to regeneration forest. Bess beetles are important dead wood-recyclers in the forest. Looking at three different forests in the Colombian Andes—natural regeneration, monoculture reforestation, and an old-growth forest as a baseline—researchers found that old-growth and natural regeneration had the highest diversity of bess beetles, while old-growth sported the greatest abundance of beetles.

Over 40 years ago pastureland in Ucumarí Natural Regional Park in the Colombian highlands was replanted with Andean alders (Alnus acuminate) in an attempt to jump start reforestation and aid soil recovery. Researchers found 3 bess beetle species in these monoculture stands, while both naturally recovering forests—also forty years old—and primary forests sported 4 species each. In all researchers recorded 6 species of beetles throughout the different forest types.

“Restoration of bess beetles and other wood decomposing fauna is a process that requires many decades, as the presence of large fallen logs depends on forest age. Clearly 40 years is not sufficient to restore a full community of bess beetles in these forests,” the authors conclude. Yet they add that monocultures and natural recovering forest both provided habitat for beginning communities of bess beetles. 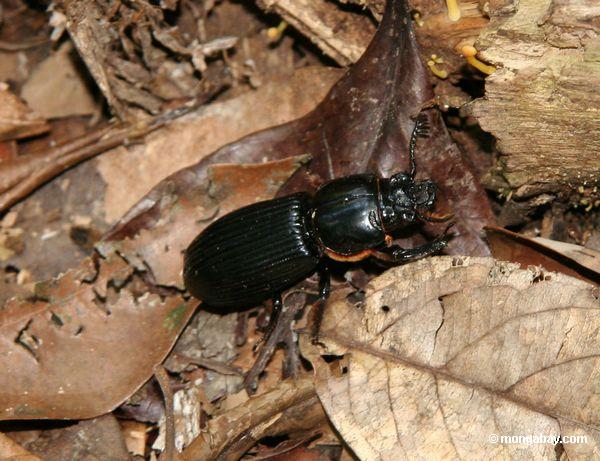 Bess beetle in Peru. Photo by: Rhett A. Butler.

(11/25/2009) A study by Britain’s Forestry Commission found that planting 23,000 hectares of forest every year for the next 40 years would lower the island nation’s greenhouse gas emissions by 10 percent, according to reporting by the BBC.

(11/23/2009) Deforestation in the Brazilian Amazon is a timeless issue that has been propounded into the public knowledge sphere since I was a child. Always eager to learn the actuality of environmental propaganda, I have been tracking reforestation practices since 2001. I first ground-truthed the realities of sustainable development in Costa Rica the summer after my freshman year at Vassar. We visited various national parks throughout the country and had the opportunity to conduct interviews with locals surrounding Monteverde on the impacts of ecotourism. This program was conducted through the School for Field Studies. My impressions were of surprise and delight at how eco-conscious Ticos appeared to be.