Brought together by the Pew Environment Group, nine shark attack victims—Achmat Hassiem of South Africa, Paul de Gelder of Australia, James Elliott of Britain, Yann Perras of France, Vincent Motais de Narbonne of Réunion, Debbie Salamone of Florida, Chuck Anderson of Alabama, Mike Coots of Hawaii, and Krishna Thompson of New York—called for a ban on fishing of threatened or near-threatened with extinction and an end to the practice of “finning”, whereby sharks are fished only for their fins, which are usually used in shark fin soup, a delicacy for the Chinese. Up to 73 million sharks are killed annually for their fins alone and overall, at least 30 percent of shark species are now threatened or near-threatened with extinction.

“Do we have the right to drive any animal to the brink of extinction before any action is taken?” said Paul de Gelder, a diver for the Australian Navy who lost his right hand and right lower leg to a bull shark last year while conducting anti-terrorism exercises. “Regardless of what an animal does according to its base instincts of survival, it has its place in our world. We have an obligation to protect and maintain the natural balance of our delicate ecosystems.”

“Even if the movie ‘Jaws’ has scared entire generations, we have to remember that it is only fiction,” said Yann Perras of LeMans, France, whose leg was severed by a shark when windsurfing off the coast of Venezuela in 2003. “This animal is, like people, at the top of the food chain. We absolutely cannot accept fishing practices that menace the natural balance of the ocean environment.”

The loss of sharks, important predators that help maintain the balance of the ocean food chain, is already having impacts. Researchers have found a decline in shellfish off the Atlantic seaboard of the United States associate with a population boom of shellfish predators which are usually kept in check by sharks. Other scientists have documented a decline in the health of coral reefs where sharks have disappeared. 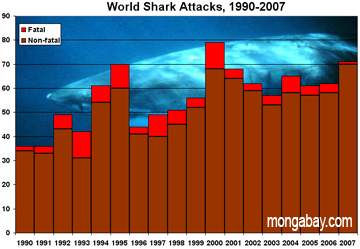 This week U.N. members will review refine their resolution on sustainable fisheries and review the Millennium Development Goals, which include a target to reduce global biodiversity loss during the International Year of Biodiversity. Pew says this is an opportune moment to push for shark conservation.

“The time has come to take meaningful action to protect sharks,” said Matt Rand, director of the Pew Environment Group’s Global Shark Conservation Campaign, in a statement. “These survivors–from many different corners of the world–have overcome their experiences to push for shark conservation. It is our hope that the members of the U.N hear this call and act.”