The research—which analyzed current greenhouse gas emissions emissions and reduction potential in eight sectors: peat, forestry, agriculture, power, transportation, petroleum and gas, cement and buildings—found that 85 percent of the country’s emissions result from land use: 41 percent come from degradation and destruction of peatlands, while 37 percent result from deforestation (currently 800,000 hectares per year), degradation through logging (1 million hectares), and forest fires. It estimated that Indonesia’s emissions would reach 2.5 billion tons of CO2 by 2020 and 3.3 billion tons by 2030 under current growth rates.

The research indicates that cutting emissions will contribute to Indonesia’s long-term economic growth relative to conventional approaches, chiefly because “many emissions sources are not economically productive.” For example, peat fires cost the country up to $4 billion annually due to “material losses, delayed logistics and health problems,” according to a statement released with the reports.

“Indonesia’s GHG emission profile is unique because it is heavily dominated by emissions
from forest and peatland where more efficient use of the land both increases economic value
and reduces GHG emissions,” reads the statement. “Stopping the use of fire as a tool for land clearing, improving
logging practices so less timber is left to rot and goes to waste, reforestation of areas
degraded by unsustainable logging practices, rehabilitation of previously opened peatlands
are some examples of high-impact GHG mitigation initiatives in the green growth strategies.
They share the principle that their long-term economic value greatly outweighs the benefits
from continuing current unsustainable and high GHG emitting activities.” 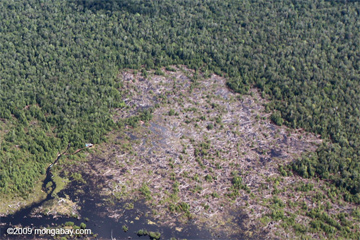 The researchers cite East Kalimantan as an example. The province, located on the eastern part of Indonesian Borneo, is experiencing large-scale forest and peatland conversion for timber production and plantations. But the study finds the province can boost its GDP growth from a business-as-usual rate of 3 percent year per year to
5 percent “without increasing emissions by moving to higher value-added activities and
promoting less carbon-intensive sectors.”

“In a developing economy like Indonesia the people will not choose to reduce GHG
emissions if to do so mean slowing economic growth. Our strategy does not require that
choice,” said Rachmat Witoelar, Executive Chair of the
DNPI. “We have found that economic development and GHG mitigation can be mutually
reinforcing. A more sustainable economic path requires a paradigm shift, but in the long-term
it will increase Indonesia’s economic growth.”

(09/15/2010) Indonesia has begun implementing a ban on exports of illegally harvested timber and wood products, reports The Jakarta Post.

How best to balance economic growth and protection of the environment?

(08/30/2010) When people are hungry for an uncertain income, they will destroy everything. When people become poor due to a poor decision they were excluded from making, who should be responsible for that? Development is seen as the answer to poverty. However, many controversial developments have actually increased poverty, and while the investors in such schemes may benefit, the local people pay the price. This happened in Tundai, a fishing village in the ex-mega rice area near Palangkaraya, Central Kalimantan. When central government in the 1990s decided to convert the peat swamp forests into rice fields, the community had no voice or involvement in the decision. The project failed. Now over a million hectares of former lush forests have become a wasteland, and the people of Tundai have been thrust into poverty.

(07/23/2010) Scientists convening at the annual Association for Tropical Biology and Conservation (ATBC) meeting in Sanur, Bali urged Indonesia’s leaders to strengthen measures to protect the country’s biologically-rich ecosystems. In a resolution issued on the final day of the five-day conference, ATBC commended Indonesia for recent moves to protect forests, including a pledge to cut illegal logging and a billion dollar partnership with Norway to reduce deforestation and forest degradation, but asked the government to immediately implement a planned moratorium on new forestry concessions on peatlands and primary forest lands.