Industrial logging concessions on islands off the coast of Sumatra threaten to undermine a sustainable community industry that may hold to key to protecting Indonesia’s carbon-dense, but increasingly endangered peatlands.

The three concessions, which cover 72,280 hectares of peatlands and natural tropical forest in Kepulauan Meranti, islands north of Sumatra’s Kampar Peninula, are held by Riau Andalan Pulp and Paper/Asia Pacific Resources International Holdings Limited (APRIL), Lestari Unggul Makmur and Sumatera Riang Lestari Ltd (SRL), companies that sell wood pulp to APRIL. Local environmental groups say the permits to develop the land, which was earlier zoned for logging, were converted to industrial plantation permits (HPH) without proper gazetting, a requirement under the Indonesian Forest Act. NGOs and communities have also raised other questions relating to legality of how the permits were issued and complain they were not consulted.
The shady nature of the deal—coupled with its expected social and environmental impacts—have spurred strong local opposition to the deal. In December 2009, almost 30,000 people from the affected area signed a petition calling for the government to revoke the license. WALHI, an Indonesian NGO, helped submit the complaint to Indonesia’s anti-corruption agency (KPK), parliament (DPR), and the Ministry of Forests. Locals are still awaiting a decision. 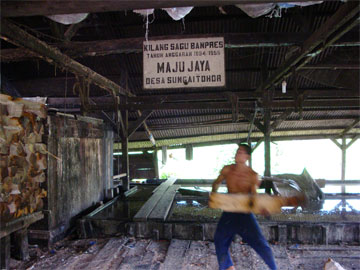 Meanwhile SRL is proceeding with the project. An investigation by WALHI in March noted a newly built road, drainage canals, and forest clearing. A subsequent visit in July found these operations continue despite ongoing opposition from local communities.

Locals have many concerns over the concessions. The project would destroy deep carbon-dense peatlands, triggering substantial carbon emissions, lowering the water table and increasing the risk of fire, eliminating fishing and hunting areas and exacerbating coastal erosion. But perhaps most troubling, the scheme would undermine a key source of income for local people: harvesting of sago palm. The people of Kepulauan Meranti have cultivated sago, a native palm, for at least hundreds of years. Sago is grown in peat forests, which provide a natural windbreak for the palms, allowing them to grow taller and produce more calorie-rich starch. Sago starch is exported to Java and Malaysia, where it is milled into flour and processed into food. The community of Sungai Tohor on the island of Tebing Tinggi alone produces about 500 tons of sago paste, worth around $10,000 each month.


“This is a good example of a sustainable, just and equitable community-based industry,” said Hariansyah Usman of Walhi Riau “These concessions threaten to obliterate this industry and show how the current system in Indonesia is trampling on community livelihoods and rights, climate, hydrology, and biodiversity. It also raises serious questions about Indonesia’s commitment to reducing emissions from deforestation.”

Usman says that instead of continuing to support powerful forestry interests that enrich themselves at the expense of the Indonesian people, the Indonesian government should see the community sago industry as a model to adopt as it moves toward its goal of reducing deforestation.

“This is the kind of low carbon development that Norway should be encouraging with its recent billion dollar commitment to Indonesia’s forests and peatlands,” continued Usman.